From the Archives: Tule Elk in Fog 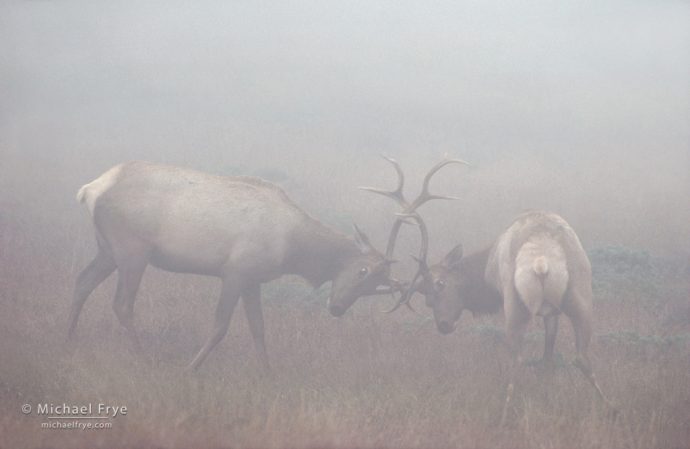 This photograph is from very deep in my archives: 1988. At that point I had only been photographing seriously for a few years. Claudia and I met in ’84, got married in ’86, and in ’88 were both working at The Ansel Adams Gallery and living in Yosemite Valley.

In those early years the main focus of my photography was wildlife. I also photographed landscapes and other nature subjects, but wildlife was my passion. I used to spend hours in the wonderful Yosemite Research Library, reading studies about wildlife habitats and animal behavior.

I knew that August was the rutting season for tule elk, so on one of our weekends Claudia and I escaped the heat and summer crowds in Yosemite and drove out to Point Reyes National Seashore, where a small herd of elk had been reintroduced into a 2600-acre fenced enclosure on Tomales Point ten years earlier.

Tule elk are native only to California. They’re the smallest subspecies of elk in North America, but a “small” elk is still a huge animal; adult male tule elk weigh 700 to 900 pounds. Tule elk were thought to have been hunted to extinction by 1870, but a single breeding pair was discovered in 1874 in the southern San Joaquin Valley. A rancher protected these elk and their offspring, and over the ensuing decades numerous attempts were made to find a permanent home for them. At one point during the 1920s the entire population lived in a fenced enclosure in Cook’s Meadow in Yosemite National Park, before being transplanted to the Owens Valley (where they still live). From there they’ve been reintroduced to many areas around the state, including Point Reyes, and the statewide population has climbed to over 4,000 animals.

We had been to Point Reyes many times before, and had seen elk, but this was the first time I’d ever gone there with the specific intention of photographing them. You can drive over a cattle guard through the fence, and hike trails within the enclosure and among the elk, but in those days they kept their distance from people on foot, so I thought I’d have better luck photographing them from the car.

My memories of that weekend are a little fuzzy after 32 years, but as I recall we drove over to Point Reyes after the last day of our workweek, and slept in our car outside the National Seashore. We woke early the next morning and found the coastline enveloped in fog – typical summer weather in that area.

Before driving through the fence into the elk enclosure, I got out my camera and 300mm lens. I used Olympus 35mm cameras on those days; the body was probably an OM-4. A couple of years earlier I had plopped down what, to me at the time, was a huge sum of money to buy a Tamron 300mm f/2.8 lens. This was a great lens optically, but the focus was completely manual. And I didn’t even had a motor drive for my Olympus; I had to advance the film manually with the little thumb lever after every shot.

Beyond the fence the road extends only for a mile or two. We didn’t see any elk in the thick fog, so we turned around. We had almost returned to the fence line when we spotted two bull elk sparring near the road. My recollection is that Claudia was driving, with me in the passenger seat. The elk were on my side of the road. I had the camera mounted on a tripod, with the tripod braced against the car door. Claudia pulled up next to the young bulls, who ignored us, engrossed in their fight. I focused, framed, clicked, and repeated. As I recall, I was only able to fire off a few frames before they stopped and wandered off into the fog.

I had to wait a week to get the film back and see what I had captured. One frame – the one shown above – clearly stood out. Looking back, this image seems like a minor photographic miracle. I loved the painterly effect created by the fog, and I couldn’t have placed the elk in a better pose, with the whites of their eyes showing, and their antlers crossed in near-perfect symmetry. How I caught that pose without a motor drive is beyond my comprehension. Sheer luck. And somehow I managed to get their eyes in focus.

I submitted this image to the California Department of Fish and Game’s annual photography competition, and it won! Moose Peterson, now a famous figure in the world of wildlife photography, was the judge. (Later I got to meet Moose in person, and Claudia and I became friends with Moose and his wife Sharon.)

The only prize for winning, aside from having your photograph published in their magazine, was getting to go out for a day with a wildlife biologist. I actually got them to connect me with someone studying endangered San Joaquin kit foxes. The next spring this biologist found a kit fox den for me in the dry grasslands on the west side of the San Joaquin Valley. He took me out to the den before sunrise, where I set up a tent as a blind and waited. Shortly after sunrise an adult fox appeared, and two pups popped out of the den. I snapped a couple of photos before they realized that something was amiss. The pups dove back underground, the adult trotted off, and I never saw them again. But it was an unforgettable moment: 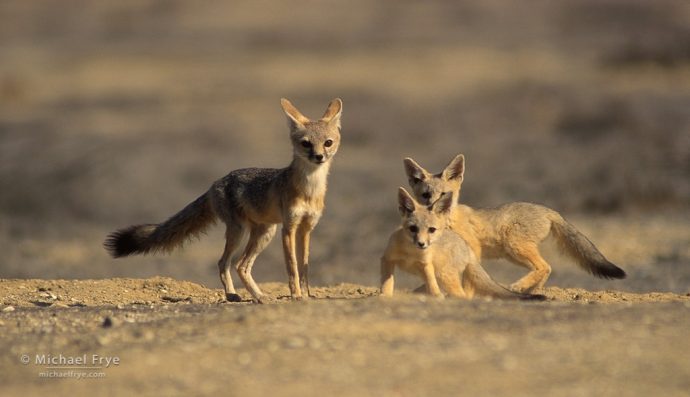 By the mid-’90s I had shifted my focus to landscape photography, but I still photograph wildlife from time to time when an opportunity presents itself. Over the years I’ve had many wonderful experiences photographing wildlife, and captured some images I like – but none more than that photograph of the elk in the fog, made way back in 1988.