From the Archives: Redbud Reflection 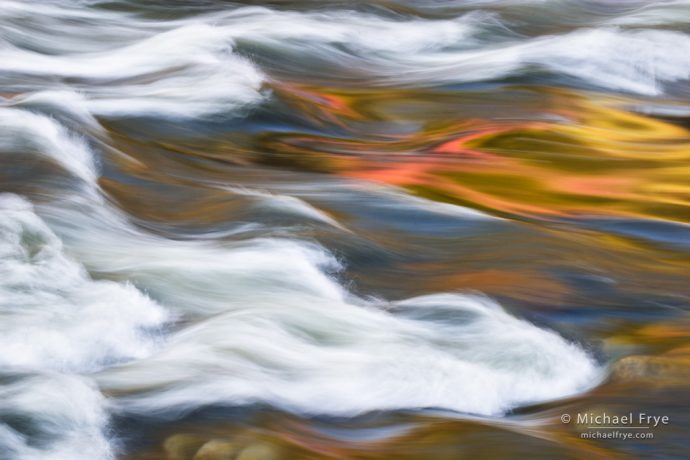 I made this photograph in March of 2004, with a 6-megapixel Canon 10D. That was my first digital camera, purchased only about nine months earlier, in the summer of 2003. The low resolution made this camera unsuitable for “serious” work, so for about two years I carried around both the Canon 10D and my Mamiya 645 film camera. I used the Canon for snapshots, and, when time allowed, to capture digital versions of my film images, so that I only had to scan the film captures when I really needed the extra resolution (like when making prints, or sending files to publishers).

I quickly learned to love digital capture. It was just so much easier: I could see the results right away, use the histogram to check the exposure, and magnify the image to see if everything was in focus. When photographing moving water I didn’t need to guess about the right shutter speed because I could try several, see the effects immediately, and dial in the shutter speed that best suited the situation. I found that the digital camera invited experimentation and creativity, because I didn’t have to pay for film and processing, and could see and refine the results of an experiment in the field. And, as if all that wasn’t enough, the dynamic range far exceeded transparency film, so the resulting images looked less harsh and more luminous. Resolution aside, when I compared images from my Mamiya and my Canon, I almost always preferred the ones from the Canon.

On the afternoon I made this image I had photographed a redbud along the banks of the Merced River, then walked downstream and noticed this amazing color in the water. The sun had just dipped below a ridge to the west, sinking the water into shade, while sunlight still illuminated the opposite bank. Several redbud bushes grew above that bank, casting their sunlit, magenta reflections into the water. I had never seen that color in a reflection before.

My first composition, made with the Mamiya, included some rocks on the opposite bank. I thought I needed those rocks so that something in the photograph would be sharp. I then switched to the Canon, and, seeing the images on the back of the camera, realized that composition wasn’t working. The bank was just a distraction.

It’s often hard to visualize in advance how a slow shutter speed will affect the look of the water, and, in turn, how that will affect the composition. But with the digital camera I could see exactly what it all looked like, and adjust accordingly. Still using the Canon, I tried honing in on just the most eye-catching part of the water, with those gold and magenta reflections and curving rapids. That seemed to work better, since the entire frame was filled with only the most essential and interesting parts of the scene. The patterns in the water itself provided enough structure to hold the composition together, even without having anything sharp in the frame. I used the slowest shutter speed I could get: 0.7 seconds at f/22, ISO 100 (I didn’t have a neutral-density filter for that lens at the time), and that seemed to give the water the soft effect I was looking for.

I refined the composition, took a series of images, and noticed that the reflections were better in some frames than others. Thinking about this, I realized that the difference was due to the wind. Even though this wasn’t a mirror reflection, intermittent breezes would ruffle the surface of the water, dulling the reflections. When the wind was calm the water in the tongue of the rapid was smoother, and the colors popped out.

I started to time my exposures for moments when the wind died, and took another series of images. Then, having dialed in the composition, shutter speed, and timing, I switched back to the Mamiya. But by then the breeze was more persistent, and soon thereafter the light faded, so none of the film images were as good as the best of the digital captures.

Luckily, since there wasn’t any sharp detail in this photograph, the resolution didn’t really matter. I have a 30×40 inch print of this image, made with the 6-megapixel Canon 10D, hanging in my living room, and it looks great.

But to me this was just another example of the benefits of digital capture, and I couldn’t wait to get a digital camera with enough resolution to match my medium-format film. In January of 2005 I borrowed my friend William Neill’s new 16-megapixel Canon 1DS Mark II, and found that with the right sharpening the resolution of this camera actually exceeded drum-scanned images from my Mamiya 645. The 1DS Mark II cost around $7,000 at the time, but somehow I scraped together the money to buy one. I haven’t exposed a single roll of film since.

In the end, a camera is just a tool. There’s been a resurgence in film use recently, and I think that’s great. You should use whatever tools work for you and your vision. For me, those early days with that little 6-megapixel Canon 10D were a revelation, a glimpse of a digital future with amazing possibilities.

Related Posts: It’s All About the Light; Can Intimate Landscapes Have a Mood?