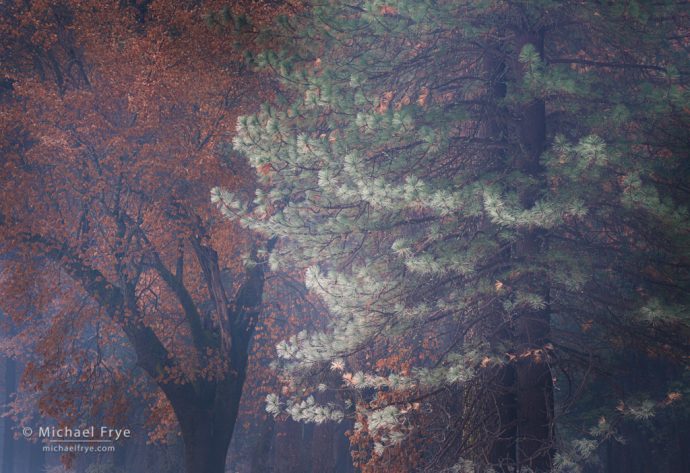 Oak and frost-tipped ponderosa pine, Yosemite. We walked to a spot along the Merced River, then decided to check out a nearby meadow, where we found some mist, and even better, beautifully-frosted trees. This juxtaposition of a frost-tipped pine and oak caught my eye. 163mm, 1/3 sec. at f/16, ISO 100.

It’s easy to view landscapes as permanent and unchanging, since the major components, like mountains rivers, lakes, etc., change slowly, at a pace measured in thousands of years – too slowly for us short-lived animals to perceive directly. The geologic evidence tells us that the land has changed – dramatically – and will continue to change, but I think for most people that’s an intellectual understanding, and doesn’t really affect the way we perceive and experience the world around us.

But when you’ve been photographing an area as long as I’ve been photographing Yosemite Valley, you start to see some of those changes taking place before your eyes. Rockslides have altered the cliffs that seem so permanent. Floods have changed the course of the river. I’ve watched fires and drought transform the forests; they’re more open now, less dense, which is actually how they looked 200 years ago, before we messed with them. Dogwoods that I photographed 20 years ago, or even 10 years ago, have disappeared, swept into the river as the banks have eroded. And of course there’s the constant dance between our planet’s amazingly beautiful atmosphere and the land below it. I no longer view Yosemite, or any landscape, as something fixed and permanent. To me the land is a dynamic, living thing, always in flux.

That shift in perception has probably changed the way I photograph. I’m always looking at what’s new – at how conditions have changed from last year, or last month, or yesterday, or five minutes ago, and how those changes might create new opportunities for photographs. That’s especially true in a place I’ve photographed repeatedly, like Yosemite, where I long ago captured the more obvious scenes and subjects. Tuning in to the changes gives me opportunities to portray a familiar landscape in new and different ways.

I was reminded of all this during our recent workshop in Yosemite, when conditions seemed to change day by day and hour by hour. We had fog and clouds that were conducive to capturing some large-scale landscape images. But we also found frost, ice, misty meadows, and interesting moments of light, all of which seemed to lend themselves to photographing the landscape on a smaller scale.

I’ve included some of those smaller-scale images here. In those ever-shifting conditions long-range planning usually didn’t work, so most of the time we just went with the flow, and photographed whatever looked promising at that moment. The captions explain what drew me to those spots at those moments. 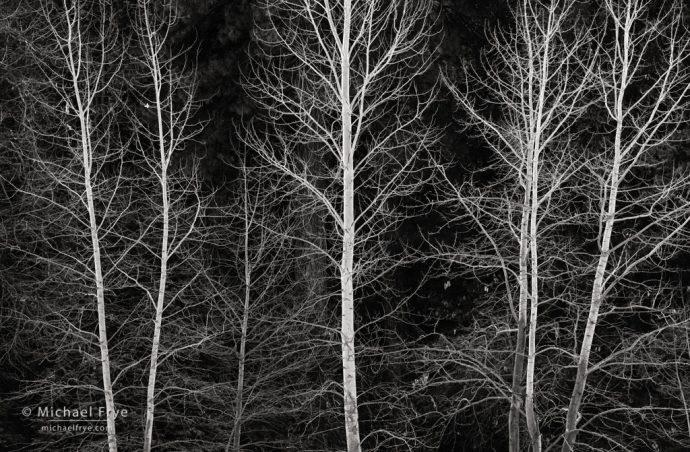 Cottonwoods, winter, Yosemite. There was no mist or frost in this image – just beautiful soft light, and a striking pattern of bare branches against a dark background. Light-against-dark always seems to work. 122mm, 1.5 seconds at f/16, ISO 100. 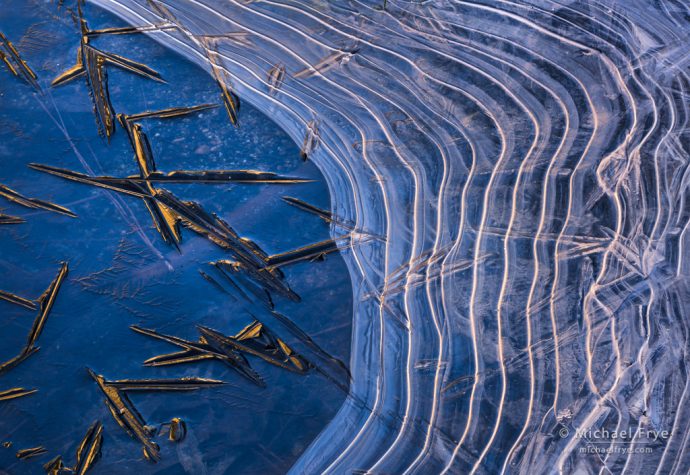 Ice patterns, Yosemite. We found this patch of ice in the morning, and wanted to come back. A close look at the weather forecasts showed that temps were not likely to be as cold on subsequent days, so we went to back to this spot the same afternoon, before it got warmer and the ice melted. 109mm, 1/4 sec. at f/16, ISO 100; focus stacked. 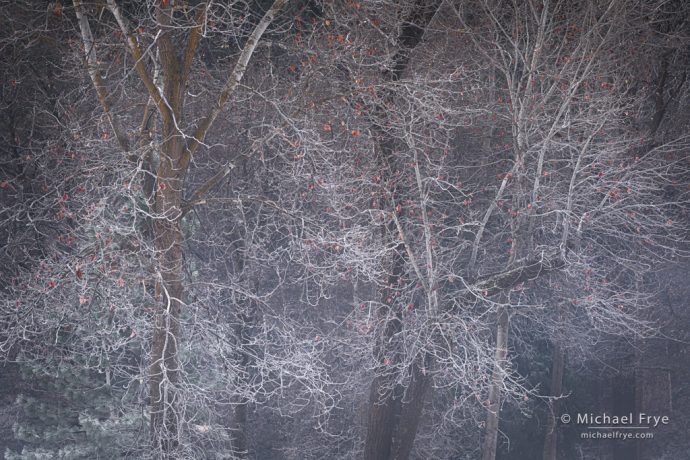 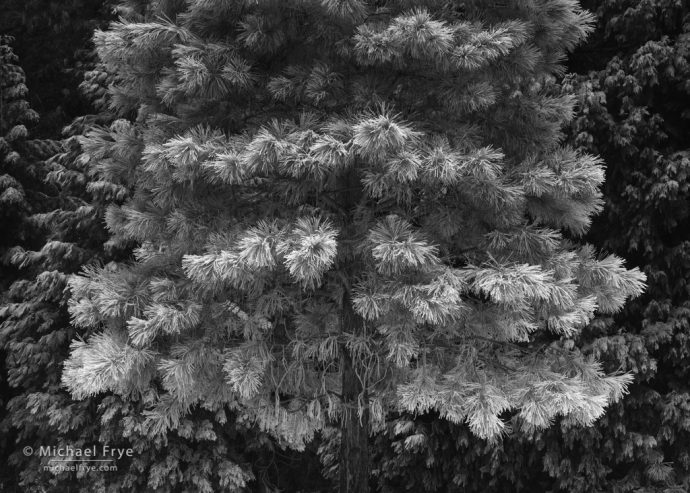 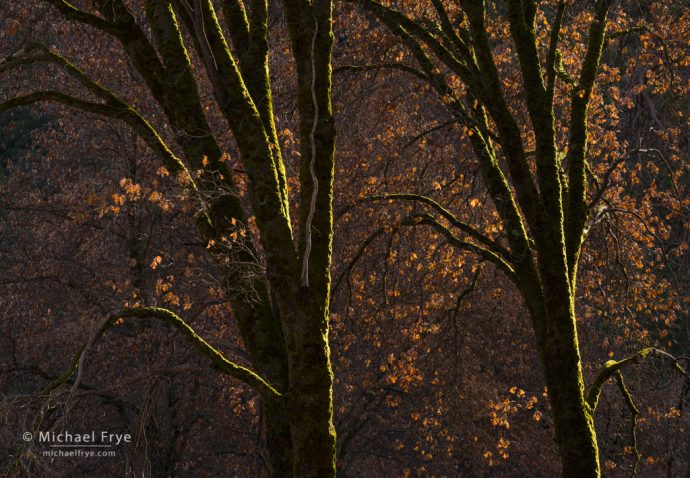 Mossy oaks, Yosemite. This one was actually planned, sort of. I had noticed that a grove of oaks were backlit for a brief period each afternoon, so we made it a point to be there at that time. The backlit leaves were beautiful, but the moss was even more striking. 168mm, 1/4 sec. at f/16, ISO 100. 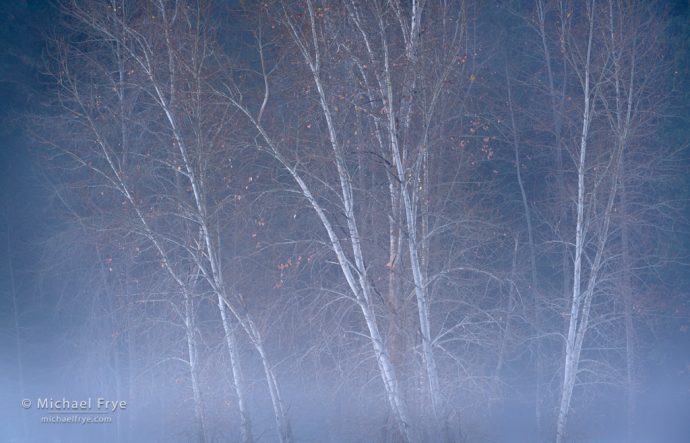 Cottonwoods and mist, Yosemite. We went to this meadow to capture Half Dome, but these misty trees looked more interesting to me. The mist didn’t last long. 200mm, 0.7 seconds at f/11, ISO 100.