Flowers in the Fog 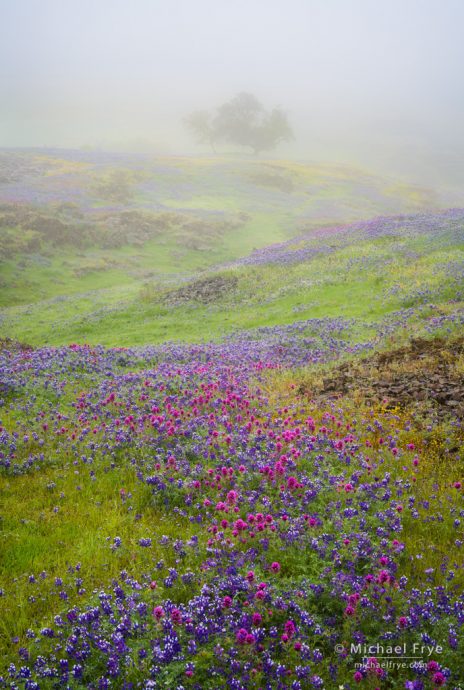 Wildflowers and oaks in the fog, Table Mountain. I loved the s-curve created by the foreground flowers. But a strong leading line won’t work unless it draws your eye to something interesting in the background. In this case the two distant oaks provided that background focal point – a period at the end of the sentence. (And those oaks wouldn’t have stood out so clearly without the fog.) 50mm, 1/3 of a second at f/16, ISO 100, focus-stacked.

After our trip to Antelope Valley Claudia and I hoped to photograph wildflowers again, so I kept my eye on the forecasts, looking for calm winds, and – if we got lucky – some clouds.

There was one day that looked promising, with showers in the forecast for much of California. Clouds and rain could be a great complement to wildflowers. But it looked like those showers would be accompanied by wind in all of the southern California wildflower spots. So I thought about other locations that might have less wind, and decided to go to Table Mountain, in northern California.

I had heard about Table Mountain, and seen many images from there, but we had never been there before. We found lots of flowers – acres of lupines and goldfields, with scattered patches of owl’s clover, and a variety of other blooms. We also found many cows and a large population of humans. Cattle grazing helps the wildflowers by lessening competition with grasses, and in spring Table Mountain is an extremely popular place for hiking. We were there during the week, and it was still pretty busy. I can only imagine what a spring weekend would be like.

It was cloudy and windy on our first afternoon there. I knew it would be windy, but the next morning was forecast to be calm, with some clouds, and I wanted to scout the area beforehand. We encountered a few sprinkles, but that’s all. Despite the wind, I made one photograph I liked late that afternoon when the sun broke through and lit the clouds overhead: 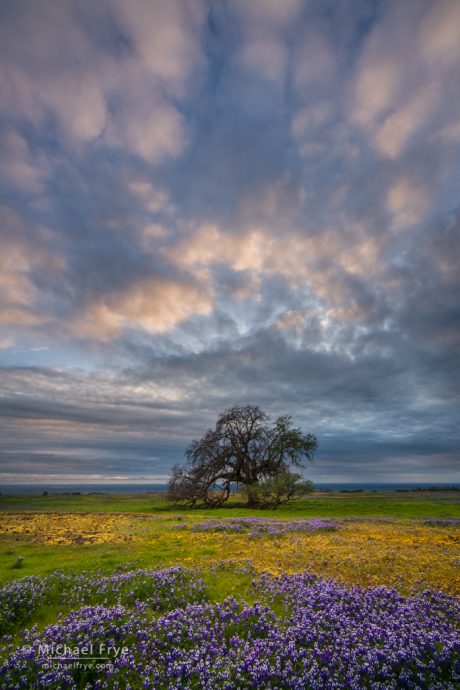 The next day we rose early, and as we drove toward the trailhead in the dark I could see low clouds overhead. I expected this, sort of. I had seen low clouds in the forecast, but wasn’t sure how low they might get. It seemed possible that the top of Table Mountain might be in the clouds – which would mean fog. Fog and wildflowers might be a sweet combination.

It was just getting light when we pulled into the parking lot – in the fog. The wind was relatively calm, and the fog lingered for a couple of hours before starting to lift. It drizzled pretty heavily at times, which made it difficult to keep the camera and the front of the lens dry, but I wasn’t complaining, as I could hardly have asked for better conditions.

I was glad I had scouted the day before; it would have been difficult to find my way around in the fog without knowing the area, and I could make better use of my time by going to spots I had picked out earlier. My two favorite images from that morning were essentially copies of photographs I had made the previous afternoon, but the fog added an ethereal mood to these scenes that I loved. Eventually the fog lifted into a low overcast, so I explored new areas, and found some nice mixes and patterns of flowers that worked well in that soft light.

We all know that weather is an important part of landscape photography. “Landscape” photographs are often as much about the sky, and the weather, as they are about the land. Even if a photograph doesn’t include any sky, the weather influences how the light falls on the scene.

I think of landscape photography as a dynamic process – almost a dance between the photographer, the weather, and the potential subjects. It’s the art of putting yourself in the right place at the right time. (And knowing what to do when you get there.)

Of course there’s an element of luck involved in that process. But if you could always predict exactly what the weather would do, and always put yourself in the perfect place, what fun would that be? We’ve all experienced times when the hoped-for light didn’t materialize, or when we realized that we should have gone there instead of here. Those disappointments just make it sweeter when we find ourselves in the perfect position to photograph a rainbow, or a spectacular sunset – or wildflowers in the fog. 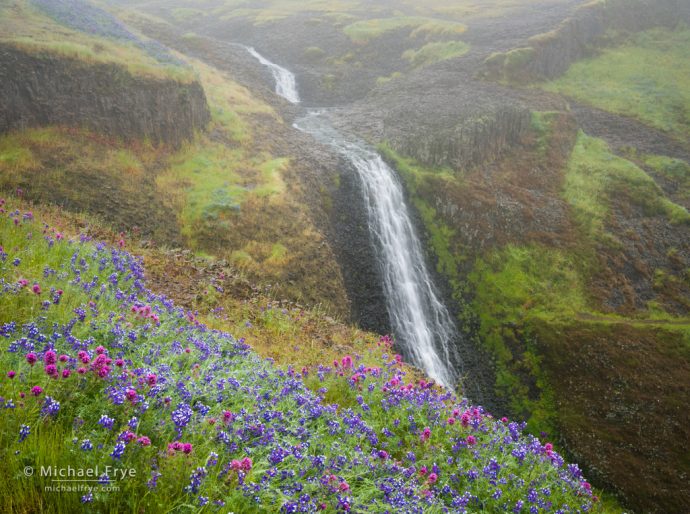 Waterfall and wildflowers in the fog, Table Mountain. It took me awhile to find this composition, but I liked the way everything came together here, with a clear focal point (the waterfall), and many repeating, criss-crossing, diagonal lines. 31mm, 1.5 seconds at f/16, ISO 100. 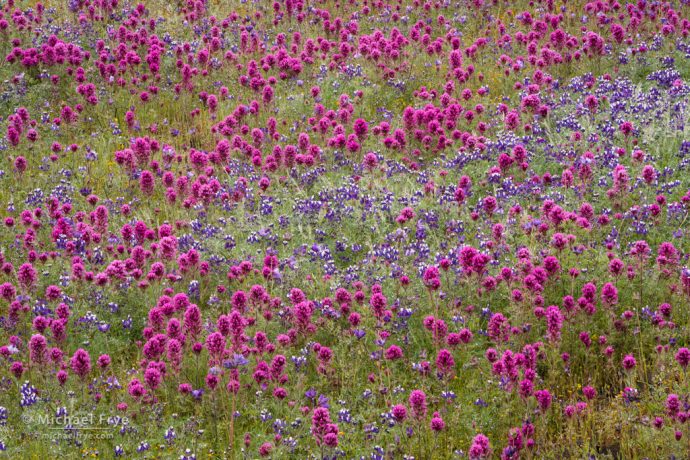 Owl’s clover and lupines, Table Mountain. A nice pattern, with a vague circle in the middle providing a hint of a focal point. 155mm, 1/10th of a second at f/16, ISO 400, focus-stacked.