Photographing Bodie with an iPhone 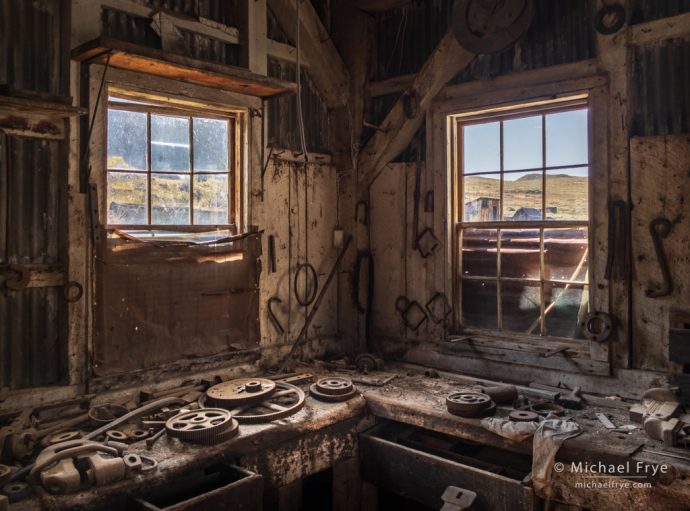 Two weeks ago our good friend Robert Eckhardt conducted another iPhone photography workshop for us. This time we were based in Lee Vining, and the workshop included two trips to Bodie, with special access to the interiors. It was so much fun.

I hadn’t photographed Bodie interiors in two years. Bodie endured two earthquakes in December of 2016, causing structural damage to some of the buildings, and knocking over bottles, shelves, and other objects. So no photography workshops were allowed into the interiors in 2017 while the park assessed the damage.

This year they allowed photography workshops into the interiors again for the first time since the earthquake, and it was great to be back. As I wrote two years ago, I’ve developed a connection to this place, and to the people who once lived there. Inside the buildings you can see what they left behind, and begin to imagine what their lives might have been like. You can sense their presence, even though they’re long gone.

These interiors seem tailor-made for smartphone photography, so that’s why we made this an iPhone workshop, and enlisted Robert to teach it. Robert is incredibly knowledgeable about iPhone photography, and has made some wonderfully creative images of abandoned buildings throughout the west, including in Bodie.

In previous workshops at Bodie we had used big cameras on tripods, so using just my phone was a very different experience – and so much fun.

The iPhone’s wide fixed aperture (f/1.8 to f/2.8, depending on the model and lens you’re talking about) allows you to use fairly fast shutter speeds, even in low light. Yet despite that wide aperture the depth of field is almost infinite, since the sensor is so small, and the lenses so short. Those factors, along with the phone’s small size, make it easy to handhold. I never used a tripod, and that was liberating, allowing me to get my camera into positions that would be difficult or impossible with a tripod-mounted camera in those cramped interiors. I made more closeups than before, partly because of how easy that was with the phone, and partly because I had already captured some of the more obvious, wider views during past visits.

Light is always vital in photography, and never more so than in Bodie. Soft, directional light from windows is wonderful, bringing out the textures and forms of the dusty interiors without being too harsh. We brought a couple of large diffusers to cover windows (from the outside!) so that we could create that soft, directional light even after the sun came up and started streaming through the windows.

But low-angle sunlight coming through the windows could also be beautiful – if it was hitting the right places. Sunlight and shade inside the buildings created strong contrast, but we handled that rather easily using the HDR modes on our phones. The native Apple Camera app has an HDR mode, which is rather subtle, but helps. For really high-contrast situations we used the HDR modes in Pro Camera or Lightroom CC.

Here’s a sampling of images I made during the workshop. You can see some of Robert’s photographs of abandoned interiors here. As I said, it was a lot of fun, and I look forward to going back – maybe next year. 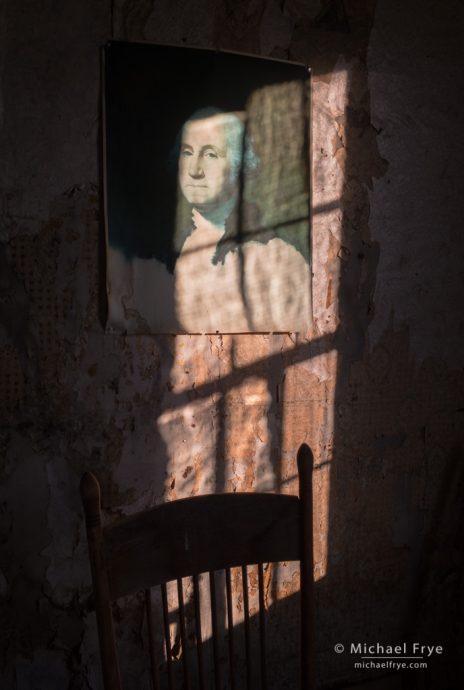 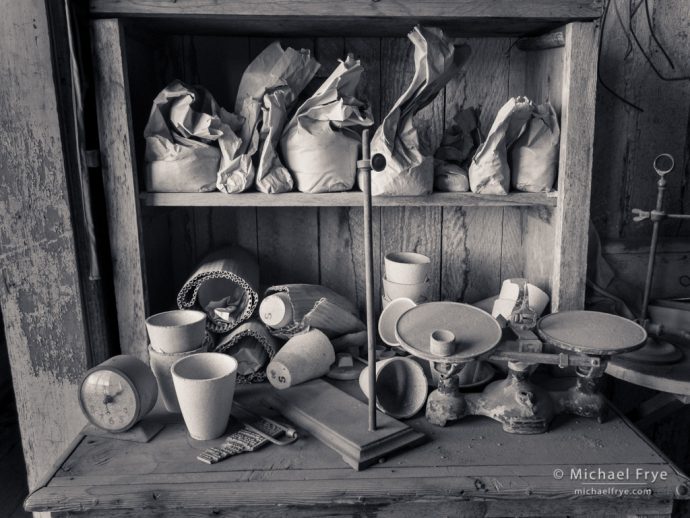 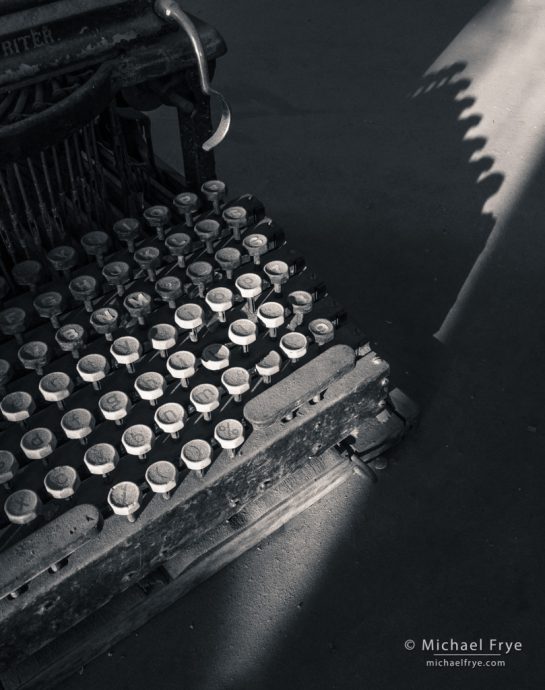 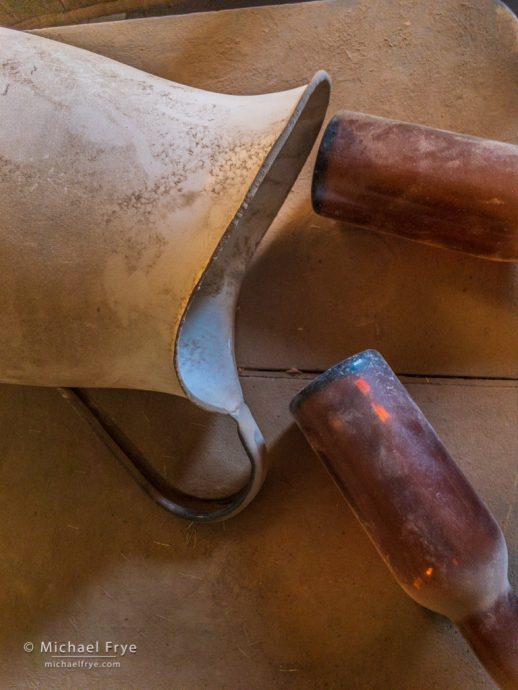 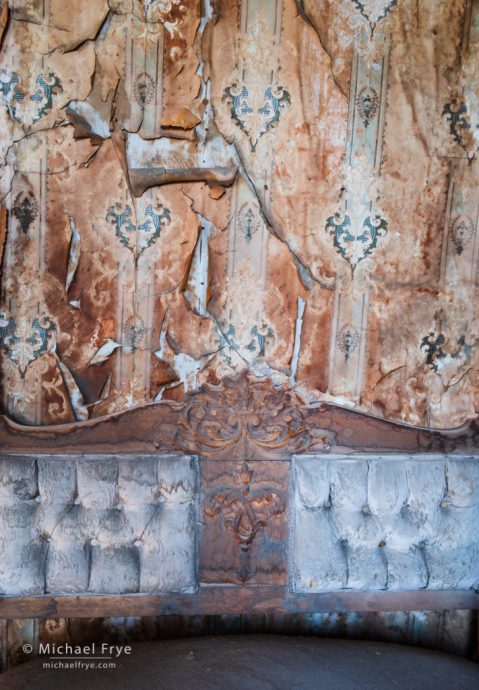 Chair and wallpaper in the morgue, Bodie SHP, CA, USA 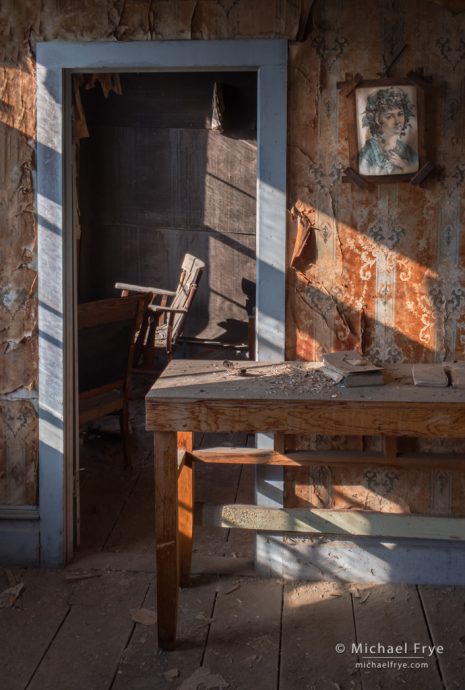 Related Posts: Where Time Stopped; The Camera in Your Pocket