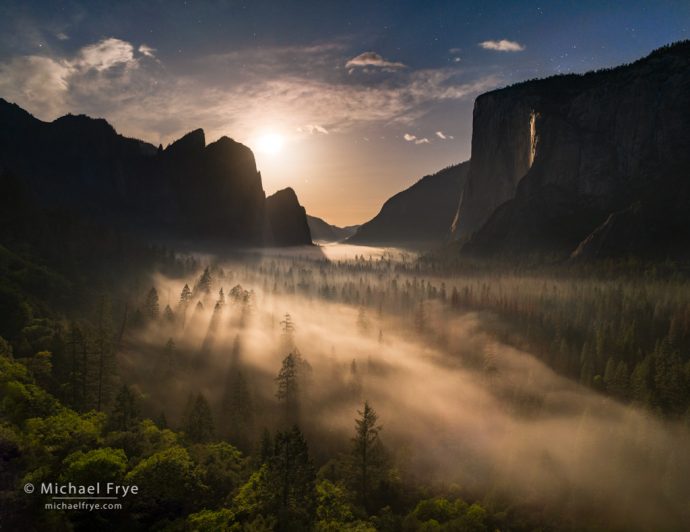 Moon setting over Yosemite Valley and Horsetail Fall, spring of 2017

Every year, around the third week of February, the sun sets at just the right angle for Horsetail Fall. With clear skies and enough water, the backlit waterfall glows with a brilliant orange color, lit by the setting sun.

Some years ago it occurred to me that the setting moon could create the same effect. In the spring of 2010 I had a chance to try this, and it worked beautifully. As I wrote back then, I walked up to one of my favorite Horsetail Fall viewing locations early in the morning, and saw an amazing sight: that beautiful, low-angle backlight on the waterfall, with the cliff behind it in the shade. It looked like sunset in February, only with stars in the sky above it. And the camera captured what my eyes couldn’t see – the orange glow created by the setting moon: 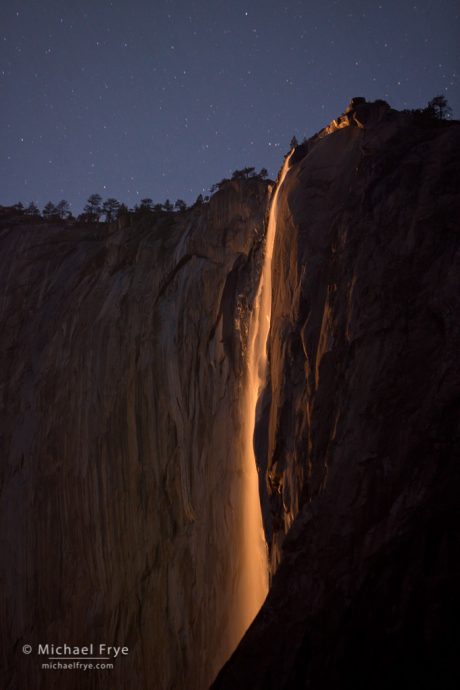 There have been few opportunities to try this again. Mainly that’s due to the drought, but also because the moon rarely reaches the right position. This year we had a near-record snowpack in the Sierra, and Horsetail Fall kept flowing late into the spring. But there was no time when the moon would set at the same angle as it does in late February — at least not during the night, before Horsetail stopped flowing. (There were dates when it would set at the right angle, but during the day, which obviously wouldn’t work.)

But there was one date when the moon would set at night just a little further north, similar to the sunset angle in early March. That’s not ideal light for Horsetail, but I thought I might try it if conditions were right. On the night I had picked out some clouds moved through, but it looked like skies were clear enough to give it a try, so I drove up to Yosemite during the wee hours of the morning. I made my way through a moonlit forest to a spot overlooking the west end of the valley, and found mist along the valley floor. This was a pleasant surprise, since I hadn’t seen any mist on the drive into the valley.

I quickly composed, focused, and made a series of bracketed exposures. To get the mist and Horsetail Fall in the frame I had to include the moon itself, and risk getting lens flare, but luckily a thin band of clouds dimmed the moon a bit and minimized the flare.

I kept photographing for another 45 minutes as the moon sank, and the mist shifted, dissipated, and reformed along the valley floor. As I expected, the light left Horsetail Fall well before moonset, so I never captured that intense orange glow on the fall. But the mist more than made up for that. It turned out the the very first sequence I captured was the one I liked best, with the most interesting mist. I blended three of my bracketed exposures together manually in Photoshop, using layer masks, in order to get detail in both the foreground and the sky.

Last February, from a nearby spot, I saw perhaps the most amazing sunset I’ve ever witnessed. It would be hard to equal those conditions, but I like this moonlit image too, for different reasons. The mist was a beautiful, unexpected bonus.