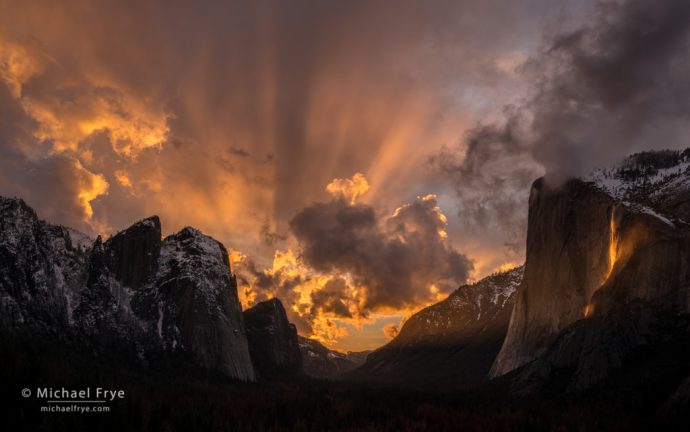 The best photography tales always seem to start with something like this: “It wasn’t looking good. The skies were completely overcast, but I decided to stick it out and see what might happen. And then…” The teller of the tale goes on to describe the amazing light show that ensued.

Of course you never hear stories about the times when the skies remained overcast and nothing interesting happened. There’s no story there. But the best light often does seem to occur when the odds are low. There might only be a ten percent chance of the sun breaking through, but if it does the results could be spectacular.

I’ve been skunked many, many times over the years. I can’t count how many times I’ve gone to Tunnel View, or Gates of the Valley, or some other location, hoping for the sun to break through and create some interesting light, only to go home disappointed. I don’t often write about those days on this blog because those aren’t very interesting stories. (Although sometimes I do write about times when I didn’t get the light I was hoping for, but switched gears and found something else.)

But this isn’t a story about getting skunked. This is one of those classic tales about a time when the odds seemed low…

As I wrote in my last post, Claudia and I drove up to Yosemite Valley early on Wednesday morning, hoping to find some fresh snow and catch a clearing storm. We got both, so it was a great morning.

Claudia had to stay in the valley to help hang the Yosemite Renaissance exhibit, so in the early afternoon I took a nap in the car. By then clouds had congealed over the valley, and I was awakened twice when graupel (snow pellets) hit the windshield. The showers were interspersed with patches of sunshine, but the satellite and webcam images weren’t promising, as I could see many clouds out to the west. But I was there, so I decided to try my luck with Horsetail Fall.

I have many photographs of Horsetail Fall of course, and I wasn’t interested in repeating myself, so I headed for a spot with wider view of El Capitan and the western end of Yosemite Valley. This location would only work with some interesting clouds; on a clear, sunny day I’d rather go to one of the two main Horsetail viewing spots and get a closeup view. On Wednesday there were plenty of clouds – too many, it seemed. I knew the odds were low, but I also knew that it was just the kind of day when something special could happen.

When I reached my location I saw thick clouds to the west, but also spotted a thin strip of clear sky near the horizon, so there was some hope. At one point the underside of the clouds started to glow, and it looked like sunlight might crawl under those clouds and break through. But then the clouds thickened, and the glow dimmed. After about five more minutes, however, the strip of blue sky near the horizon grew larger. Then a few minutes later a beam of sunlight broke through underneath the clouds and lit the very bottom of Horsetail Fall: 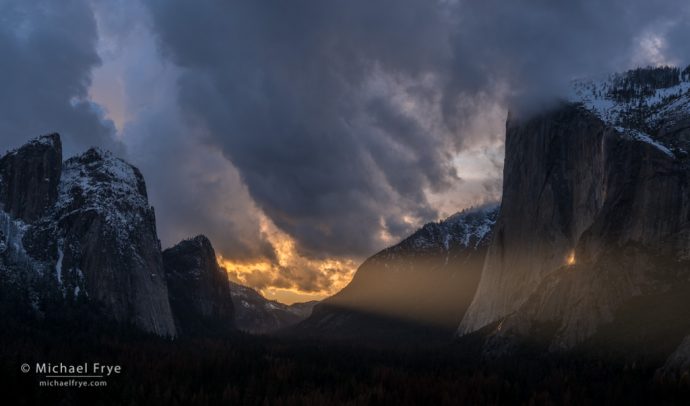 I hoped that as the sun sank that beam of light might move up and hit Horsetail, but instead the light faded, blocked by more clouds. Then, a few minutes later, the beam returned. This time it reached a little higher… and faded again.

But the clouds seemed to be breaking up a bit. A few minutes later sunbeams began fanning up from behind a cloud. Then, for the third time, a beam of light broke underneath the clouds and hit the bottom of Horsetail. This time the light kept moving upward until the whole waterfall was lit.

At this point it became difficult to believe what I was seeing. Was this really happening? Seriously? It looked like a scene from a dream. I’ve always thought Albert Bierstadt’s Yosemite paintings were unrealistic, but maybe not – maybe he really did see those things. After all, here was a Bierstadt painting before my eyes.

And the dream continued. The sun rays above the cloud morphed and changed, but lingered for at least five full minutes while the wind played with backlit, glowing Horsetail Fall. I kept photographing through it all, varying my compositions slightly as the clouds moved and the light changed. Every moment was wonderful, but my favorite is the one shown at the top of this post.

It was perhaps the most amazing light show I’ve ever seen. Our planet is always beautiful – always. But sometimes nature outdoes itself.

P.S. The contrast in these scenes was extreme, so I used auto-bracketing to capture sequences of five exposures, each two stops apart. While doing this I kept a careful eye on the red channel in my histograms, making sure that I had at least one exposure in each sequence where the red channel wasn’t clipped (pushed up against the right edge of the histogram). Later I used Lightroom’s HDR Merge to blend these bracketed sequences together. (Both photographs shown here were captured and processed this way.)

It’s natural to want to know where these photographs were taken from (especially if you’re familiar with Yosemite Valley and have tried to photograph Horsetail Fall). I’m usually willing to share everything about how my photographs are made, but I don’t think it would be appropriate to share this location. In my younger days I did a lot of rock climbing and mountaineering, and I’m comfortable moving in terrain that would be risky for most people. Furthermore, I’m familiar with mountain hazards, know when and where rockfall and avalanches are most likely to occur, and can assess and minimize (though not completely eliminate) these risks. Rockfall is a serious hazard near Yosemite’s cliffs. Not just when a big slab occasionally peels off and rumbles down to the valley floor, but also from the steady drizzle of smaller rocks, especially in certain areas. These smaller rocks are not to be taken lightly; a fist-sized rock whizzing towards you at 100 MPH is no joke. I’ve seen people exploring around, looking for alternative Horsetail views, who lingered in spots that are particularly prone to rockfall (and avalanches when there’s snow) – spots I wouldn’t go near. Please don’t go exploring around Yosemite’s cliffs unless you know what you’re doing.