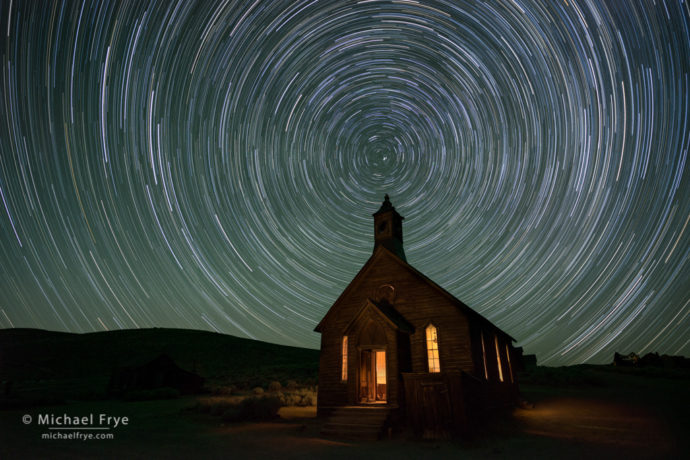 We’ve been able to take workshop groups into Bodie at night several times in recent years, which is always a lot of fun. But I’d never captured star trails there, mainly because star trails take a long time, and I’d wanted to spend my limited time there doing other things with the class. But during our last night session there a couple of the participants and I decided to try photographing what’s become a Bodie classic – star trails over the Methodist Church. The church works perfectly for this because you can line up the steeple with the North Star and create concentric circles overhead.

You can’t go in the church, but we were able to illuminate the interior by placing flashlights on the windowsills and shining them inside. We also added a little light to front of the church. Then we started our star-trail sequences, using interval timers to make a series of four-minute exposures (mine were at f/5.6 and 1600 ISO). We left the interval timers going for about 90 minutes.

Later I stacked all these frames together in Photoshop to complete the image. The main advantage to doing a series of shorter exposures for star trails, rather than one long one, is that you can you use a relatively wide aperture and/or high ISO, which enables you to record some of the fainter stars and have more trails – but without making the sky too bright. The sky would have become completely washed out during one long, 90-minute exposure at f/5.6 and 1600 ISO. But during one four-minute exposure that sky remained relatively dark. Then I used the Lighten blending mode in Photoshop, which makes light areas in any particular frame override dark areas in all the other frames. That means any section of a star trail recorded during one of the four-minute exposures became visible against the darker sky of the other layers. But the background sky didn’t become any lighter overall because the brightness of each frame was similar, so one frame didn’t override another. In other words, the Lighten blending mode made the 90-minute sequence cumulative for the stars, but not for the sky behind the stars. So in the final image you see 90 minutes of star trails, but essentially only four minutes of the background sky.

We’ll have another opportunity to photograph Bodie at night later this week during our Starry Skies Adventure workshop, and tomorrow and Tuesday we’ll be taking a workshop group into those beautiful Bodie interiors. Should be a fun week!