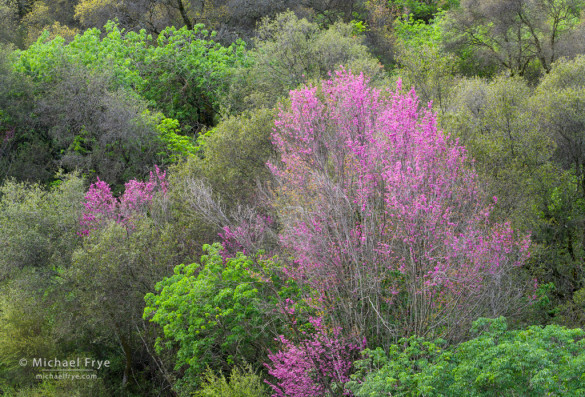 The redbuds have been coming along nicely in the Merced River Canyon, along Highway 140 west of Yosemite. I drove through the canyon on Monday, and most of the redbuds were blooming. Not all of those that were blooming were fully open yet, and some redbuds were still just budding. On the other hand, I saw a few that were starting to leaf out. Overall I’d say they were not quite at peak, but there were plenty of beautiful redbuds to photograph. They’ll probably peak around this weekend, or next week.

It was harder to tell what was going on with the poppies in the canyon. In late February it was starting to look like we would have a great year for poppies. There were a couple of very colorful hillsides in the western part of the canyon, and the bloom was spreading further east. But since then we’ve had a lot of rain. While rain is usually good for wildflowers, poppies like warm sunshine — at least once they begin blooming. A stretch of cold, rainy weather will cause already-blooming poppies to pack it in for the year and go to seed.

And that appears to have happened in the Merced River Canyon. When I drove through on Monday I could see some fairly extensive swaths of poppies covering the same hillsides they covered two weeks ago. But there just weren’t as many of them. I drove through just after noon, and it had rained the night before, so the poppies weren’t fully open, which made it hard to judge just how vibrant the display would be if the poppies were open. But making allowances for that it still seemed that the poppies had faded a bit, and were getting crowded out by the thickening grasses.

Claudia drove up the canyon yesterday and reported that there were poppies, but no really eye-catching stands of them. She drove through about 5:00 p.m., so she didn’t see them in the middle of a sunny afternoon either, but she also thought the grasses were overtaking the poppies. Claudia hiked the first part of the Hite’s Cove Trail with a friend, and got a closeup view of the flowers there. She said that there were only a few poppies, but a nice selection of other flowers like goldfields, baby blue eyes, tri-colored gilia, blue dicks, and a few shooting stars. And lots of newts.

While the early-blooming poppies seem to be fading, it’s possible that a stretch of warm, sunny weather (like the one we’re having now) could encourage some of the later bloomers to emerge and create a strong secondary bloom over the next week or two. My guess is that won’t happen, as I think the grasses are getting too thick and crowding out the poppies already. But these things are hard to predict, so I could easily be wrong. We’ll see.

Back on March 2nd, before the rains, Claudia and I made it out to Pine Flat Lake, east of Fresno. We had never been to this area, but had heard some reports of nice poppy displays, so we decided to check it out. And there were indeed some eye-catching hillsides full of poppies. We had a fun afternoon photographing there, and I’ve included a few images below. We haven’t been back there, but the Pine Flat Lake area is very similar to the Merced River Canyon, with steep hillsides covered in annual poppies, so I suspect that the poppies there have also faded since our visit.

While northern California got a good drenching over the last two weeks, most of that rain didn’t reach very far south, so it doesn’t look like it will be a great wildflower year in southern California (although I did see a couple of recent reports showing flowers in the Carrizo Plain).

Meanwhile, the Yosemite area has received above-average precipitation, and it’s wonderful to see everything green again, with the waterfalls so full. And northern parts of the state should have some good wildflower displays over the coming weeks. If you’ve found any good wildflowers recently, please let us know in the comments. And for more information on California flowers, I’d suggest checking Sandy Steinman’s blog, Natural History Wanderings, the CalPhoto group on Yahoo, and the DesertUSA site. 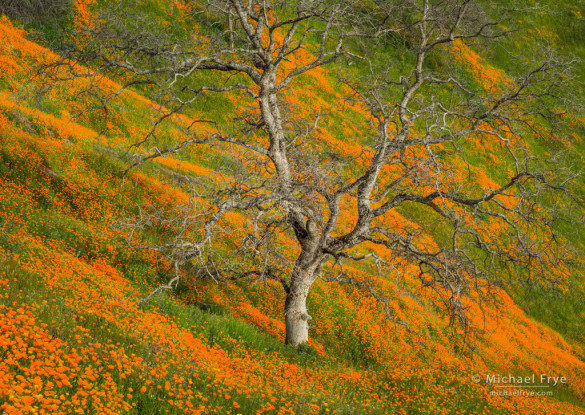 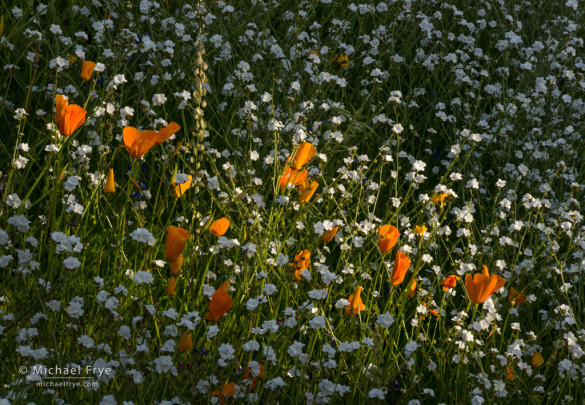 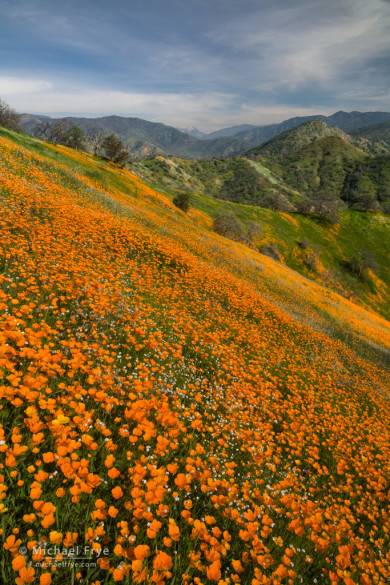