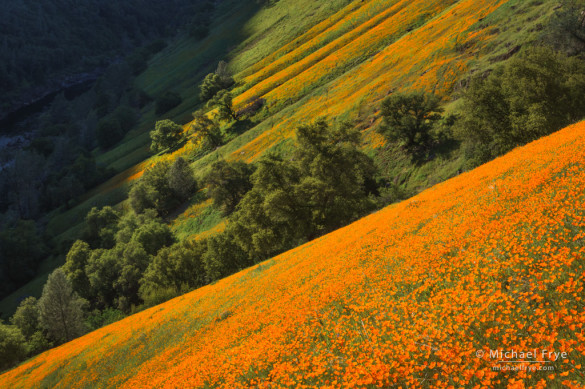 Spring has arrived early this year. It seems the poppies in the Merced River Canyon west of Yosemite liked the warm February weather we’ve been having, and they’ve been appearing in greater numbers over the last two weeks. On Friday, when Claudia and I drove up to Yosemite Valley for the Yosemite Renaissance opening reception, we saw some vibrant patches of poppies on the north side of the canyon (opposite Highway 140) a few miles easts of Briceberg. Other spots further east were just starting to show tinges of orange, but I expect those areas will become more colorful. It’s shaping up to be a good year for poppies in the canyon, but it’s just getting started, and the flowers are likely to last for several more weeks if the weather cooperates.

I’ve also seen photos of brilliant poppy displays in the southern Sierra foothills (east of Fresno and Bakersfield). And Death Valley is having a good bloom right now also. But southern California has received below-average rainfall so far this winter, so some of the best wildflower spots in the state like the Carrizo Plain and Antelope Valley probably won’t have great displays this year unless they get more rain soon.

This map from NOAA shows rainfall in the western U.S. over the last six months. You can see a swath of green, indicating above-average precipitation, stretching from Monterey Bay east to the Central Valley, and then south and east through the southern Sierra foothills. These are the areas most likely to have good flower displays now. For more information on California flowers, I’d suggest checking Sandy Steinman’s blog, Natural History Wanderings, the CalPhoto group on Yahoo, and the DesertUSA site.

As much as I enjoy the warm weather and flowers, the entire state needs more rain. There’s a chance of showers in the forecast for Thursday, and hints of possible storms next week, but we’ll see. Let’s hope we get more precipitation in March and April before the rainy season ends!