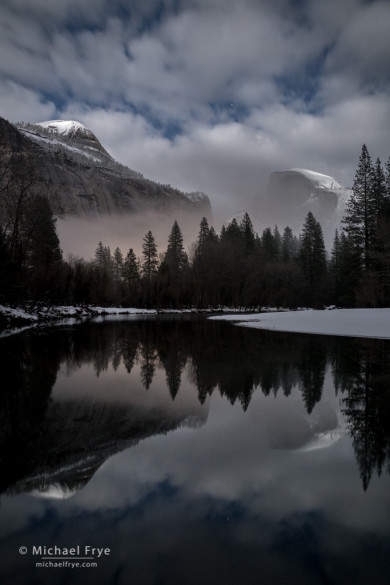 Half Dome, North Dome, and the Merced River by moonlight, Yosemite. This photograph was made about 11:30 p.m. When I first arrived at this spot Half Dome was completely obscured by fog. But I waited, and soon Half Dome and North Dome started to appear through the mist. I made a series of images with similar compositions as the clouds and mist shifted, but I particularly liked the light in this one. Sony A7rII, Rokinon 24mm f/1.4 lens, 20 seconds at f/4, 4000 ISO.

I promised to post more moonlit images from last Saturday night and Sunday morning, so here they are. In case you missed them, I posted a photograph from that night made at Gates of the Valley here, and another image from Tunnel View here. But it was such a beautiful night, with fresh snow, and mist that stayed around for a long time, so I photographed for almost four hours, and was able to try many different viewpoints and ideas. I’ve included extended captions to give a little more information about each photograph here.

The second image below shows the valley lit by the setting moon. Half Dome and Cathedral Rocks are orange, just as they would be at sunset, only in this case the light came from the moon rather than the sun. We can’t see that moonset color with our eyes because the color-sensitive cones in our retinas shut down when the light gets dim, but the color is there, and cameras can record it. The same thing happens with lunar rainbows; we can’t see the color, but the colorful bands of the rainbow show up perfectly in photographs.

The problem with images lit by the rising or setting moon is that the light is really dim, especially when the moon isn’t full. On this night the moon was two-thirds full, and to expose that moonset image properly I had to push the ISO up to 12,800 ISO at f/2.8 in order to keep the exposure short and prevent the stars from streaking. It’s hard to tell here, but it’s a very noisy photograph – as you might expect from such a high ISO. In hindsight it probably would have been better to open up the aperture to f/2, so that I could lower the ISO to 6400. I’m usually reluctant to use this lens at f/2, because I know the corners will be soft, but in this case it might have been preferable to have softer corners but less noise. Short-exposure night photography really pushes the limits of equipment, and those are the tradeoffs you sometimes have to make.

I used a new camera for all these photographs, a Sony A7rII. Although 12,800 ISO was pushing things a bit (especially since I had to lighten some shadows even further in that image), photographs made at 6400 ISO and below were remarkably noise-free, and overall I was quite impressed with this camera’s nighttime performance – especially since it packs 42 megapixels into a full-frame sensor.

Of course such nitpicky details about noise and sharpness only matter when making larger prints, and are always secondary to image esthetics. We can strive for technical perfection, but the photograph’s emotional impact is more important. So on that note, I hope you enjoy these images – and I hope you’re all having a great holiday season! 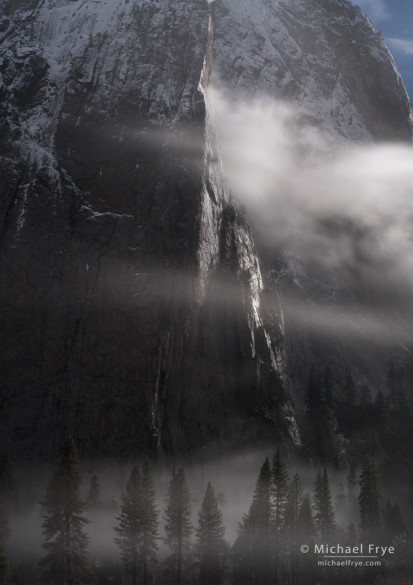 Middle Cathedral Rock by moonlight, Yosemite. This was one of the earlier images from that night, made at 10:43 p.m. from El Capitan Meadow. I tried some wider views here, but the light and mist on this section of Middle Cathedral Rock were really striking, so I put on a slightly longer lens (an old Nikon 50mm) to capture this scene. 30 seconds at f/5.6, 1600 ISO. 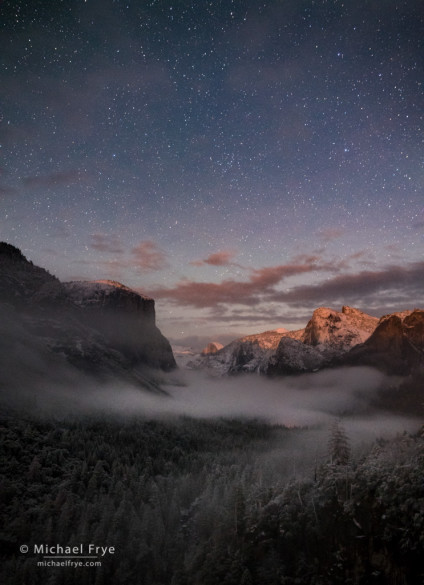 Yosemite Valley lit by the setting moon, Yosemite. This was made shortly after the photograph I posted on Christmas Eve. Minutes earlier this view had been completely obscured by fog, but then the mist parted to reveal this scene lit by the setting moon. As the sky cleared I turned the camera sideways to a vertical orientation to include more stars. I used the Rokinon 24mm lens again at f/2.8, 20 seconds, 12,800 ISO (the moonlight was very dim by then). 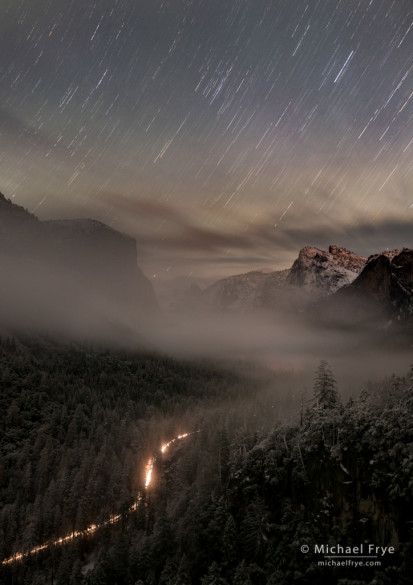 Star trails over Yosemite Valley from Tunnel View, Yosemite. After the moon set the light became too dim to get detail in the darker areas of this scene and still keep the exposure short enough capture pinpoint stars. So I decided to make a longer exposure and let the stars become streaks. There’s still a hint of color in the clouds and on Cathedral Rocks from the afterglow of the just-set moon, and car lights created a nice s-curve down below. I used the Rokinon 24mm lens again, with an exposure of 15 minutes at f/2.8, 1600 ISO.

Related Posts: Gates of the Valley by Moonlight; Merry Christmas!