Gates of the Valley by Moonlight 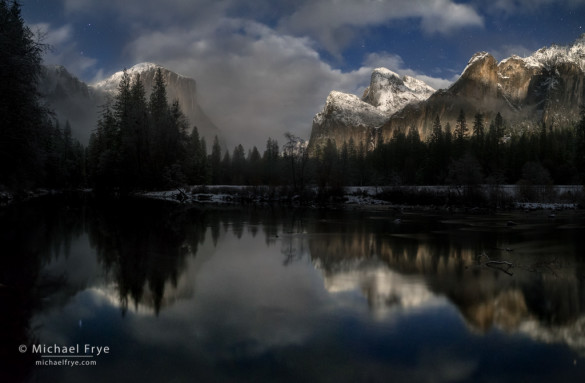 Gates of the Valley by moonlight, Yosemite NP, CA, USA

A small storm arrived yesterday morning. It looked like it might clear before sunset, but by early afternoon it became obvious that showers would linger throughout the day. There was, however, another window of opportunity, as the two-thirds-full moon was due to set at 1:45 a.m. When the clouds started to break up around 9:00 p.m. I drove up to Yosemite Valley.

This storm was a little warmer than the previous ones, bringing mostly rain instead snow to Yosemite Valley, but in typical fashion the temperature dropped at the tail end of the storm, and I found a light dusting of snow. I arrived just before ten o’clock, almost four hours before the moon was due to set, so this was the lunar equivalent of an early-afternoon clearing, with the moon still high overhead. But there was abundant mist, and moonlight breaking through clouds, so it was quite beautiful. And the mist lingered for hours, so I stayed and kept photographing until after the moon set.

I haven’t had time to process all the images yet, but this image from Gates of the Valley is one of my favorites. It was captured around 12:40 a.m., as the moon was getting lower, and the light more interesting. I had already made a few images from this spot when I noticed the clouds breaking up a little, revealing stars. I could also faintly see a band of moonlight raking across the bottom of Cathedral Rocks and Bridalveil Fall.

The only way to capture all this with my best nighttime lens, a Rokinon 24mm f/1.4, was to stitch together a panorama. So I turned the camera vertically and captured four frames, each at 15 seconds, f/2.8, and 6400 ISO. There wasn’t time to level the tripod properly for capturing a panorama, so I just eyeballed it, using my camera’s virtual horizon to keep things straight, and leaving plenty of overlap between frames. Lightroom’s Panorama Merge had no trouble blending the images together.

It was another magical, moonlit night in Yosemite. I got home at 3:00 a.m., but it was totally worth every minute of lost sleep. I’ll post more images soon.