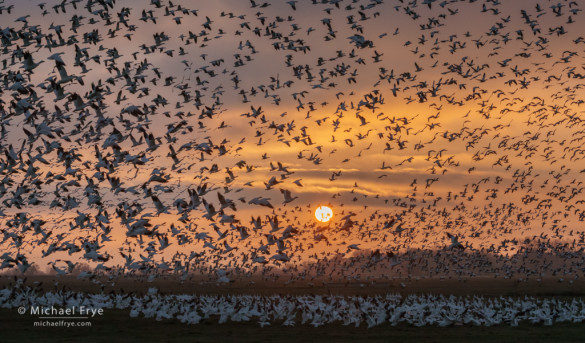 It should come as no surprise to any photographer that the interaction between subject and light is important. In fact, I’d say that this interaction is the essence of the whole thing; it’s what photography is all about.

I think both approaches can work. But having said that, I almost always think about light first. What’s the light now? What might happen to the light in the next five minutes, ten minutes, hour, or two hours? I try to anticipate how the light and weather might change, decide what kind of subject(s) could work with that light, and only then decide where to go.

While both light and subject are important, light is more variable, and usually less predictable. In landscape photography it’s the element you have the least control over, so you have to adapt to the light, rather than hope that the light on a given day will happen to fit a pre-determined subject.

Last Monday afternoon, for example, I saw interesting clouds on the Yosemite webcams, so I headed up there hoping to photograph those clouds above one of the classic valley scenes at sunset. That was a short-term plan based on the anticipated light. But when I got to the valley the clouds had dissipated, so I had to make a new plan. What would work on a clear, cloudless evening? Well, Horsetail Fall might, especially since it had just gotten a boost in water flow. So I photographed that, and took advantage of something unanticipated to help make it work: the wind.

The photograph I made later that night, of Upper Yosemite Fall by moonlight, was something I’d planned for years. But it involved a particular interaction between subject and light, and the idea for the photograph came from thinking about light first. After making a photograph of Horsetail Fall by moonlight several years ago, I asked myself whether other waterfalls could be backlit by low-angle moonlight at the right time. And the answer was yes: Upper Yosemite Fall could be backlit if the moon rose in the right position.

This kind of interaction between subject and light played a big role in a more dynamic, fast-changing situation a couple of weekends ago, when Claudia and I joined some friends at one of the San Joaquin Valley wildlife refuges. Morning fog had lifted into overcast grayness, so we ran some errands in town, then headed back to the refuge in the afternoon. The stratus deck persisted, but we saw some patches of blue sky, and hints of sunlight. I hoped that the clouds might break up enough to create some interesting skies.

It took awhile, but an hour or so later I noticed sunbeams breaking through clouds to the west. This was a sign that didn’t take a psychic to read: it was time to move! I needed to find a spot with birds between me and those sunbeams, so there would be some likelihood of birds flying in front of that sky.

From the refuge’s observation deck I could see a large flock of Ross’s geese feeding in one of the fields, so I drove around the tour road to get closer. It turned out to be a great spot, with geese frequently flying from one part of the field to another, and passing in front of an increasingly-interesting sky. I took plenty of photos, but the ones from this time period that I ended up liking best usually featured only a few well-positioned birds. Here’s one example: 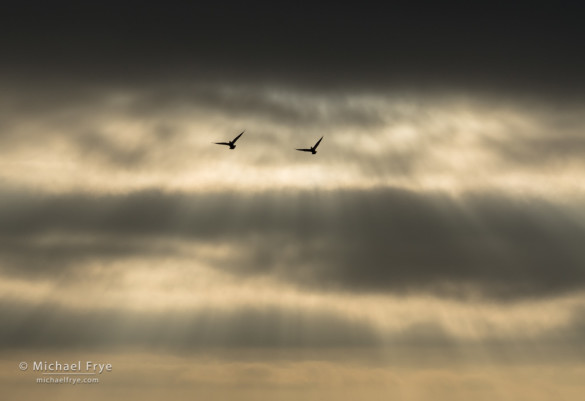 As the geese moved, fanning out in the field to feed, I adjusted my position too, trying to keep the densest part of the flock between me and the western sky. As sunset approached, bigger sections of the sky started to light up and turn color. I was thinking about putting a wide-angle lens on my second camera body in case a mass takeoff filled that colorful sky with birds. And at that moment they started to lift off.

With no time to change lenses, I zoomed my 70-200 lens out to 70mm, and that turned out to be wide enough. I put the sun just below the center of the frame, and let the birds swirl around it – again, thinking about the light, and hoping that the subjects would cooperate and fly into the composition. Fortunately they did. It was really hard to pick out one frame from this takeoff, but the one at the top of this post is my favorite by a slight margin.

Was this a lucky photograph? Absolutely. But I increased the odds of getting lucky by thinking about the light first, and finding a subject that would work with it, rather than deciding to photograph a certain subject and then hoping the light might cooperate.

P.S. A still photograph, no matter how good it is, can’t convey the sound and motion of a mass takeoff like this. Fortunately, Claudia captured an amazing video of the event with her iPhone (be sure to view it in HD):

I didn’t see what triggered the takeoff, but I think perhaps an eagle flew nearby. In the video you can see that the geese were banking and swerving – making evasive maneuvers in the air, which they only do to evade an aerial predator. Since eagles are the only aerial predator big enough to tackle a goose, that seems to be a likely explanation. The only other flying objects that geese seem to feel threatened by are low-flying airplanes, but there were no planes at that moment.