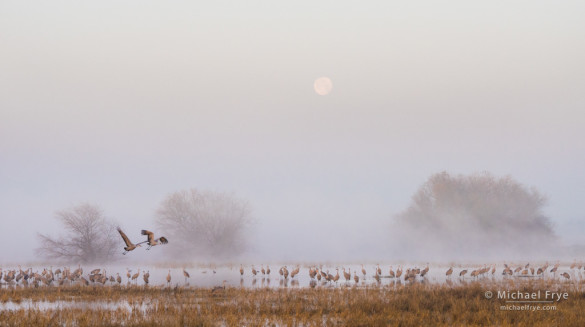 Although I specialize in photographing landscapes these days, I also enjoy photographing the masses of migrating birds that spend the winter in California’s Central Valley. And while I won’t pass up an opportunity to capture a close-up wildlife portrait, most of the time I’m trying to include some of the animals’ habitat. I’m really attempting to photograph landscapes with birds in them, and, as with other landscapes, use the light, weather, and moment to convey a mood.

Last Tuesday morning Claudia and I made another trip down to one of the wildlife refuges in the Central Valley. As usual, I hoped for fog, but knew that if the fog didn’t materialize there would be a nearly-full moon setting to the west, which also might help to add some mood to the photographs.

As it turned out, we got both. We found some low-lying mist, but it wasn’t thick enough to obscure the moon. I just needed some birds to add to the mix, and fortunately we found a flock of sandhill cranes roosting in a pond with the moon behind them.

Street photographers will sometimes find an interesting scene, then wait for people to walk into it. I often do something similar with birds: compose a scene, then wait for birds to fly into it. In most wildlife refuges you’re required to stay in your car along the tour route, so you don’t disturb the animals (they’re used to cars, but get spooked by people on foot). Here I positioned the car so that the moon fit into the gap between the bushes, with the cranes lined up underneath. Then I just waited until some birds flew by, took off, or landed. Sometimes I zoomed in or out a bit; if some cranes flew by above the moon, for example, then I needed to zoom out to include them. But the basic composition stayed the same. I captured birds in many different positions, but liked the simplicity and balance of the image above.

I’ve included a couple of other recent wildlife landscapes below. Again, I tried to use the light and weather to convey a mood, and a sense of place. It’s also nice when large flocks of birds fill the frame!

Related Posts: Winter Pilgrimage; A Trip Through the Central Valley 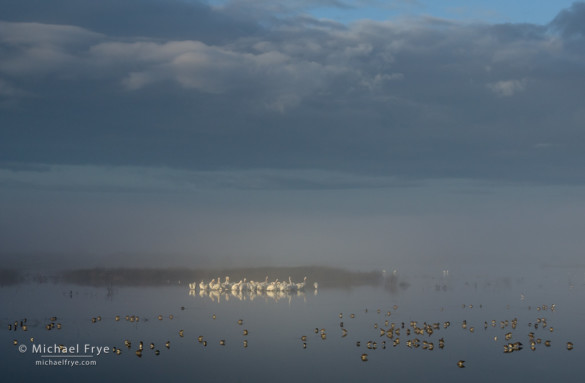 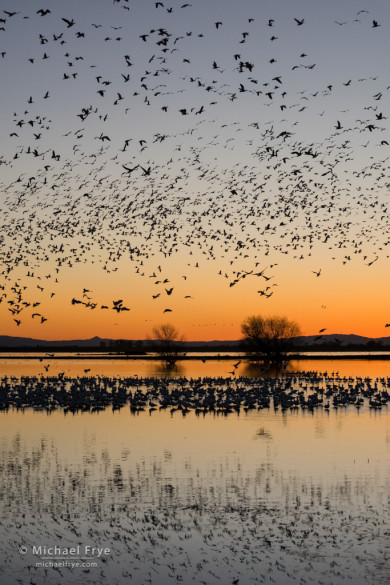