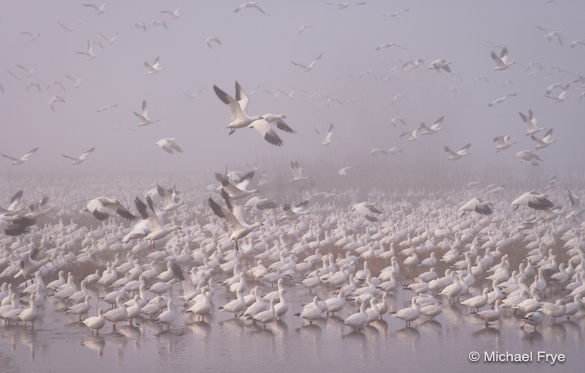 I’ve had a love affair and obsession with snow geese, along with their close cousins Ross’s geese, for 25 years. Watching a large flock of these birds take flight, filling the sky from horizon to horizon while deafening your ears with their calls, is an unforgettable, transcendent experience.

I’ve photographed these birds in every way imaginable over the years. You can see more images of them in my album of bird photographs on Google+, including some deliberate blurs, and a flash-blur. Last Wednesday and Thursday Claudia and I drove down to the San Joaquin Valley once again to photograph birds. This time I focused on capturing ethereal images of geese in the fog, and tried looking straight into the late-afternoon sun. I’ve included some notes on the accompanying photos a little further down.

On Wednesday we also met our friends David Hoffman, Charlotte Hoffman, Kirk Keeler, and G Dan Mitchell at the refuge. Dan has posted several images from that day on his blog; I particularly like this one. David also posted photos on Google+, including one with uncountable numbers of geese. And Charlotte wrote a nice blog post about the day, with photos and links to videos.

Also, you can see these images larger in my album on Google+. And if you missed it, last year Claudia captured some great video footage of geese flying in at dusk, and flying out the next morning.

Fog is common in California’s Central Valley in the winter, and I’ve been trying for a long time to capture the soft, white-on-white effect of snow or Ross’s geese in the mist. But you need some luck. If the fog is too thick you can’t see the birds unless they’re really close. Once the fog starts to lift it can quickly turn into a dull, low overcast.

On Wednesday morning we found a dense, low layer of fog, and a huge flock of geese right next to the tour road. Here, about 90 minutes after sunrise, the fog was just starting to lift, with a hint of sunlight breaking through. This image and the next are as close as I’ve come to capturing the misty, white-on-white photograph I’ve imagined.

I posted this the other day, but thought it should be included in this album too. I like the simplicity of this photo, while the previous one is more about ordered chaos.

This image isn’t ordered chaos – just chaos. Part of this huge flock took flight, disturbed for some unknown reason, and this frame was made just as the group in front of me lifted off.

This photograph was an experiment. It’s not usually a good idea to photograph right into the sun like this – too much contrast, and a high risk of getting lens flare. But, as I said, I’ve tried just about everything imaginable with these birds, so why not this?

I hoped that a bird or group of birds might block enough of the sun to eliminate the flare. There was no way to time this – I just held down the motor drive as groups of geese took off and hoped for the best. In this frame a bird does partially block the sun, and there’s even a little starburst effect, but I still had to clone out some flare. The sun and its reflection in the water are blown out, but that’s acceptable to me, as that’s what you’d see in real life. I used Lightroom 4 Beta for the initial processing; it’s new and improved highlight recovery abilities did a much better job of handling the areas around the sun than Lightroom 3.

The next morning we found much less fog than the previous day, but there was a little bit in one corner of the refuge, and I captured this early image of three cranes flying past the setting moon.

Once more we found a huge flock of geese near the tour road, with more arriving every minute. This image shows some of the new arrivals lit by the first rays of sun, with the moon behind.

2. Ross's geese landing in the fog 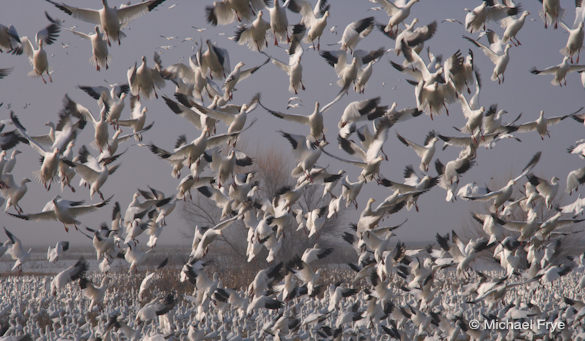 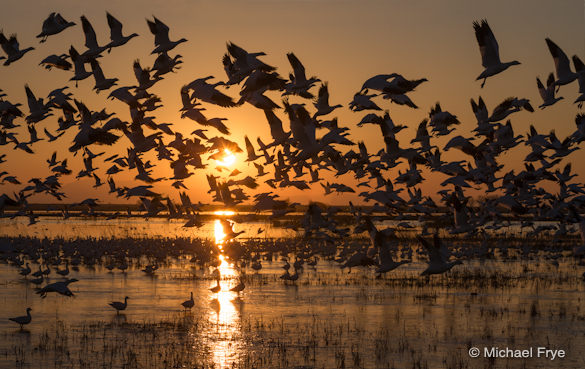 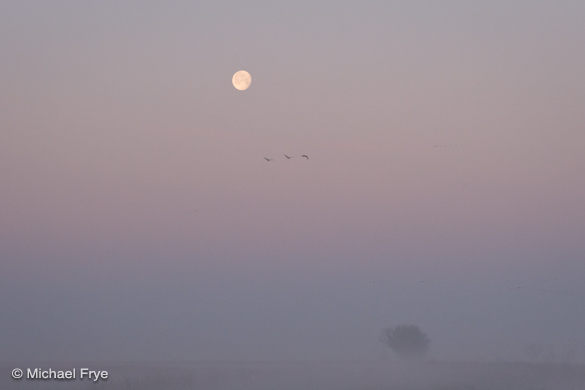 Related Posts: A Blizzard of Birds; Natural Beauty in Motion