It’s been awhile, but I thought it was time to post another photo critique. This time I’ll look at an image by David Silva from Yosemite’s high country.

David found some amazing lenticular clouds flowing over Yosemite’s high peaks just before sunset. (Where was I that day?) David told me that he and his wife were driving over Tioga Pass to the eastern Sierra when he noticed some interesting clouds forming. He considered stopping earlier, but decided to push on to Olmsted Point, and was able to make it there in time to catch the light on the clouds and peaks before the sun set.

This was perfect timing. There’s a nice orange glow on the highest peaks, creating a warm-cool color contrast. The last light highlights Mt. Conness in the distance, creating a small-but-important focal point. The clouds fit into the gap between the peaks is perfectly. There’s a beautiful, dramatic, late-day mood to the scene.

David used a 16:9 panoramic format on his Canon SX280 camera for this scene. Of course the camera is just cropping the image to create that format, which could easily be done later, but setting the panoramic format in the camera might help to better visualize the final composition while you’re in the field.

(Those kind of in-camera adjustments only apply to JPEGs. Some cameras might let you choose a panoramic format when using Raw mode, but the Raw file won’t be cropped when you first view it in software.)

That panoramic format certainly works for this scene, as it conveys the broad extent of the cloud formation. The image is relatively clean and uncluttered, and the clouds and ridgelines create a nice pattern of dark and light layers across the frame.

The only quibble I have with the composition is that there’s too much empty sky above the clouds. That empty sky is probably the least interesting part of the photograph, and anything that’s not adding to the image is diluting it’s impact, at least slightly.

The original JPEG file (which David sent me) has even more space above the clouds. David said he cropped the top in order to divide the image into thirds: ⅓ sky, ⅓ clouds, and ⅓ landscape. But from my point of view there are two problems with this idea. First, the clouds and peaks are slightly diagonal, so if you manage to divide the frame into thirds in one area, the proportions will be different elsewhere. In David’s original crop (at the top of this post), the right side of the frame is roughly divided into thirds between the sky, clouds, and land, but that ratio falls apart on the left side, leaving too much sky above the most interesting, eye-catching part of the photograph.

Second, and more importantly, I think that trying to make a photograph fit the rule of thirds hurts more often than it helps. The universe is too wonderfully varied for any rule to fit every composition. Sometimes the rule of thirds works, but sometimes the center of the frame is the best place to put your subject, and sometimes it’s better to put the subject (or horizon line) right near the edge of the frame. Every situation is different. If you fill the frame with interesting stuff, leave out distractions, and keep the image clean and simple, the composition will probably work regardless of where the focal points or horizon lines end up in the frame.

Panoramic version cropped slightly on the top and right sides

To me this slight crop makes the image a bit more dynamic.

With such dramatic light and clouds, there are bound to be other compositions that could work as well. David did try some other, non-panoramic compositions;, and put two of those on Flickr, which I’ve included here: 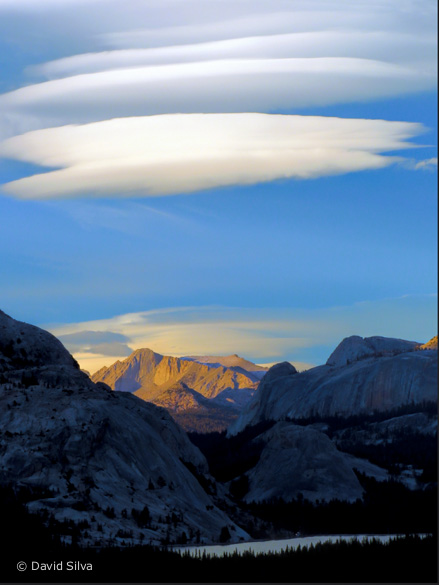 One of David’s alternate compositions 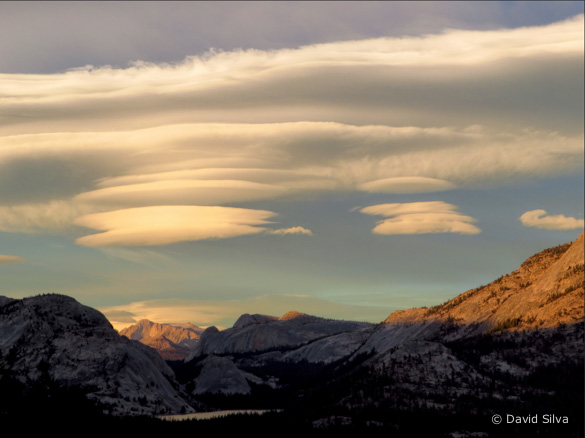 Another of David’s alternate compositions

David told me that although he ended up liking the panoramic version best, he tried other compositions because you can never be sure. And I agree that David’s panoramic image works better than the two other versions he put on Flickr. But I think there were other possibilities.

I think David tried to hone in on that area with his two alternate compositions, which was a great idea, but perhaps he didn’t quite get the balance and framing right. It’s tricky; the panorama is the most natural composition for this scene, and when you try to zoom in you have to cut off the sides or tops of the clouds, and it can be difficult to figure out where to do that. But I think there are tighter views that work, and I’ve included three possibilities here (cropped from the original panorama): 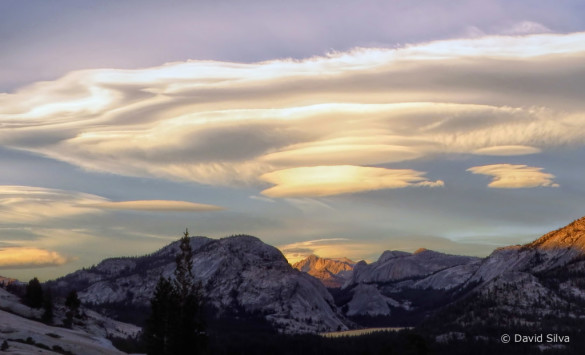 Alternative 1: Focusing on the left side of the scene 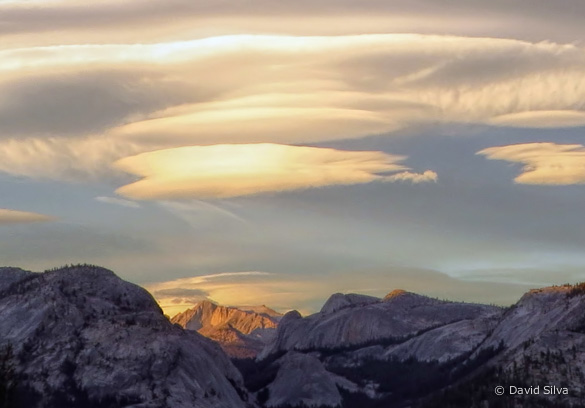 Alternative 2: A tight view of Mt. Conness and the clouds above 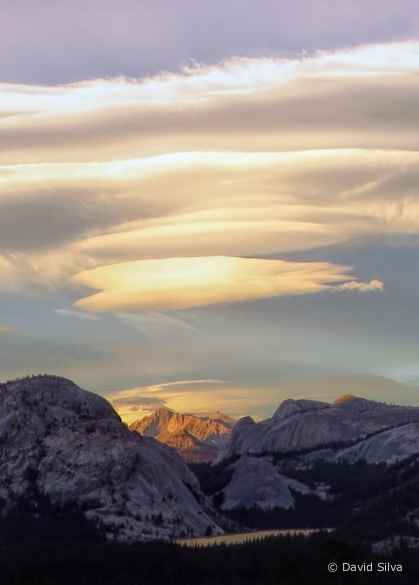 Alternative 3: A vertical with Mt. Conness and the clouds

None of these are necessarily better than the panorama, but they’re options that I would have tried (had I been lucky enough to be there), so I’d have more choices later. I might have a slight preference for the vertical, but they all have their merits. Some versions might work better for different situations; the panorama needs to be seen big, while other, tighter compositions would stand out when displayed at a smaller size.

(Note: I would never recommend doing such severe cropping after the fact, as you’re throwing away too much resolution. It’s always better to zoom in and get the composition right in the camera. I’ve included these cropped versions only to show what some of the other possible compositions were.)

As I mentioned earlier, David used a Canon SX280 for this image – a “point-and-shoot” camera. He told me, “My primary reason for being out in nature is not to take photos. It is to be there, in nature, experiencing to its fullest… Consequently, I’ve made a conscious decision to carry as light weight camera as possible, and no other equipment.”

And that’s perfectly valid. We all photograph for different reasons, and lightweight equipment has a lot of appeal. The image quality from modern point-and-shoot digital cameras is excellent, and your eye is always more important than your gear anyway.

For me, the biggest drawback to this particular camera is that it lacks Raw mode. With JPEG mode the image is processed in the camera, which means less flexibility in processing the image later – especially with things like white balance, sharpening, noise reduction, exposure, and highlight recovery.

All this means that you have to pay more attention to getting everything right in the camera, and I think David did that pretty well here. The image was hand-held, with a shutter speed of 1/50th of a second at f/8, ISO 80. Normally I’d consider 1/50th of a second a bit slow for hand-holding, but since the focal length was only 5mm (!), 1/50th should be fast enough.

F/8 is the smallest aperture on this camera, and although I have no personal experience with this, I’ve heard that you can actually get some bad diffraction with point-and-shoot lenses at f/8, so f/5.6 might produce sharper photos with this camera. With such a short focal length, and no objects close to the camera, f/5.6 or even f/4 would have been sufficient to get everything in focus.

The biggest technical issue here is that the edges of some of the clouds look a little hot – overexposed and lacking detail. In the original, unprocessed JPEG those areas look a little better, though the very brightest areas still lack some texture. In both versions the histograms looks fine, with nothing pushed up against the right edge, so I suspect that JPEG compression may be at work here. With a Raw file it would probably be easy to bring out more detail in the edges of those clouds. These washed-out areas are relatively small, so they don’t detract much from the overall impact of the photograph, but they’re also the brightest things in the frame, so your eye goes right there.

Also, the panoramic crop results in a fairly low-resolution file, limiting the possibilities for making large prints. Stitching together two or more standard-format frames would have created a higher-resolution file.

Aside from minor cropping, David adjusted the white balance in Photoshop, and used Topaz Adjust to “get a little more detail and pop.” To me the white balance and overall contrast look about right. The biggest problem, as I pointed out, is the lack of detail in the edges of the clouds.

Before dodging and burning

After dodging and burning (darkening the sky and lightening the foreground)

This is a powerful photograph of a spectacular weather event in the Yosemite high country. The composition is clean and strong, and the light and moment are wonderful. I think some minor cropping, along with a little dodging and burning, would improve the image, and there were some alternate compositions that could have worked as well. But I think most of us would love to have this image in our portfolios.

As always, I’d love to hear your comments. How do you like the photograph overall? Do you prefer the original crop, or a different version? Have you had any experience taking serious photographs with point-and-shoot cameras?

Thanks David for sharing your photograph! Please take a look at his work on Flickr and on his website.

As part of being chosen for this critique David will receive a free 16×20 matted print courtesy of the folks at Aspen Creek Photo. If you’d like your images considered for future critiques, just upload them to the Flickr group I created for this purpose. If you’re not a Flickr member yet, joining is free and easy. You’ll have to read and accept the rules for the group before adding images, and please, no more than five photos per person per week. Thanks for participating!

Related Posts: What’s the Least Interesting Part of This Photograph?; Photo Critique Series: Visual Flow in a Photograph of Half Dome