Could We Finally Get Some Rain? 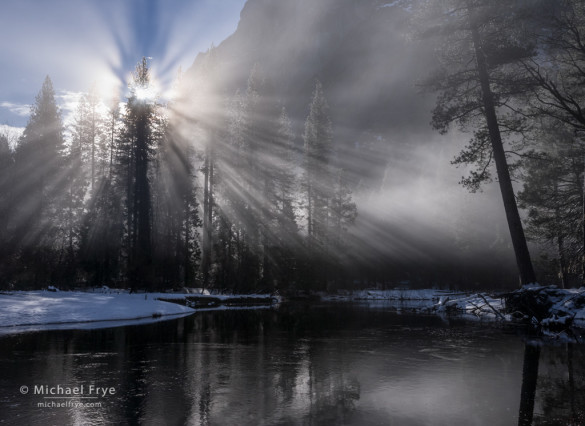 Sunbeams and mist along the Merced River, Yosemite

For many places in California, 2013 was the driest year on record. And so far this winter (our usual rainy season) has brought almost no precipitation. January has brought a procession of sunny days, with temperatures in the 60s or even low 70s at my house at 2700 feet in the Sierra foothills. It’s pleasant weather, but weird, and a little scary, as it seems like it will never rain again.

But finally the forecast is calling for rain and higher-elevation snow this week. It’s not supposed to be a big storm, but we’ll take what we can get. The main pulse of this system is due to arrive Thursday, but showers might linger into Friday or even Saturday. Snow levels are expected to stay at around 7,000 feet on Thursday, but may drop to 4,000 feet on Saturday, so it’s possible, though not likely, that Yosemite Valley could get a dusting of snow.

Although this one weather event won’t end the drought, it could provide an opportunity to photograph a clearing storm in Yosemite Valley. Based on the current forecast, Friday looks like the most likely day for this, but we could also see clearing-storm conditions on Saturday if some showers linger long enough. And snow isn’t a requirement; in fact you’ll usually see more mist in Yosemite Valley after a rainstorm than a snowstorm. The photograph above was made after a rainstorm last January.

Could this storm signal the end of our dry weather pattern? Maybe, but so far the computer models seem to indicate that this is just a temporary change, not a long-term shift in the pattern. Of course long-term predictions are less reliable than short-term ones, so we can hope that the models are wrong in this case.

Horsetail Fall is currently bone dry. The upcoming storm should revive it and send a little water over the fall, but we need at least two or three more decent storms between now and mid-February to get the flow up to an average level.

Looking further out, we need a wet February, March, and April to have a normal spring waterfall season in Yosemite, and, more importantly, fill the state’s reservoirs, and water all the trees, grasses, and other plants. Keep your fingers crossed! And you if you know a rain dance…