Saving the Sequoias During the Rim Fire 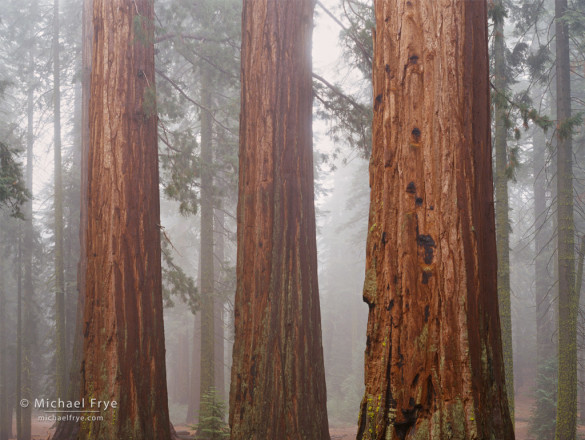 I thought this was an interesting story in the L.A. Times about efforts to save Yosemite’s giant sequoia trees and old-growth sugar pines during the Rim Fire. Sounds like it was quite dramatic (though perhaps the writer played up the drama a bit).

Today the fire is almost out. They’re still listing it as only 84% contained, but that’s because they’re letting it burn slowly into remote and rocky areas east of Cherry Lake and north of Hetch Hetchy. Elsewhere the fire is smoldering here and there within the containment lines, but rain and snow last Saturday doused a lot of that activity, and smoke from the fire has diminished greatly. All the main roads inside and outside the park are now open.

Claudia and I drove to Yosemite Valley and then over Tioga Pass last weekend, and found that the visible effects of the fire were quite minimal along that route. A long stretch on the north side of the road east of Gin Flat was burned by firefighters as part of their containment efforts, but this was a low-intensity burn that left the larger trees intact. We understand that some areas along Highway 120 west of the park burned more severely, so you can see stands where all the trees were consumed, but we haven’t been out there ourselves.

I’m looking forward to seeing the area recover from the fire. There are bound to be some good wildflower displays in the burned areas next spring. And I’m glad that the sequoias survived the fire.

Related Posts: After the Fire; Star Trails Over the Rim Fire