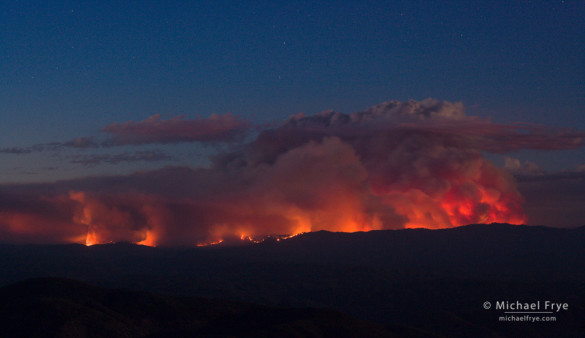 Wildfires are common around here in summer and fall. Fire means smoke, and photographers visiting Yosemite during a fire sometimes complain about the smoke. I’ve learned to roll with it. When smoke spoils my plans, I make a new plan. That attitude actually applies to any photographic situation. I can’t control the weather, so I adapt to whatever conditions I find.

On Tuesday afternoon the clouds over the Sierra were spectacular, so Claudia and I headed up the Tioga Road to try to catch some of those clouds lighting up at sunset. As we approached Siesta Lake, however, we became immersed in smoke from the Rim Fire, and realized that the smoke would block the sunset light. So I went to Plan B, my standard plan in these situations, which is to photograph the fire itself.

The Rim Fire is west of the park near Highway 120. We thought we might find a good view from the Crane Flat lookout tower, but unfortunately some low trees blocked the view. So we drove back up the Tioga Road and found a spot with a better view down the canyon toward the fire, where I made the photographs below, with the red sun setting through the smoke, and then of the smoke-tinged clouds at sunset.

Then last night we drove to a hill near our house in Mariposa with a distant view of the southern part of the fire. As the sky darkened, the red glow from the fire, lighting up the underside of the smoke, was incredible. The photograph above was a 15-second exposure, made about an hour after sunset.

I always have mixed feelings about photographing fires. On the one hand, fires are dramatic, and beautiful, and highly photogenic. They present wonderful and unique opportunities for photographs. And I understand how fire is a necessary and natural part of the ecosystem here.

On the other hand, I know that fires cause great destruction. Firefighters are risking their lives to fight the Rim Fire. Two homes have been lost, and several thousand houses are threatened.

The Rim Fire grew from 16,000 acres to 53,000 acres yesterday. It’s already the largest fire in the this part of the state since the Stanislaus Complex Fire in 1987, which burned 147,000 acres. The location is eerily similar; in fact the Rim Fire is burning some of the same areas that were consumed in 1987.

Highway 120 west of Yosemite is closed indefinitely, but the fire is still two miles from the park’s western boundary, and a long way from Yosemite Valley or other major attractions. So far the smoke has been mostly blowing to the north, so there’s little direct impact to park visitors. While people have to take Highway 140 instead of Highway 120 to reach the park from the west, Highway 120 within the park (the Tioga Road) is open.

Let’s hope that conditions change, and the fire slows down. In the meantime, yes, I’ll be out again photographing the fire again tonight, taking advantage of whatever conditions we get.

P.S. Here’s the best map I’ve seen showing the growth in the fire yesterday. And this is a link to the official information page for the Rim Fire. 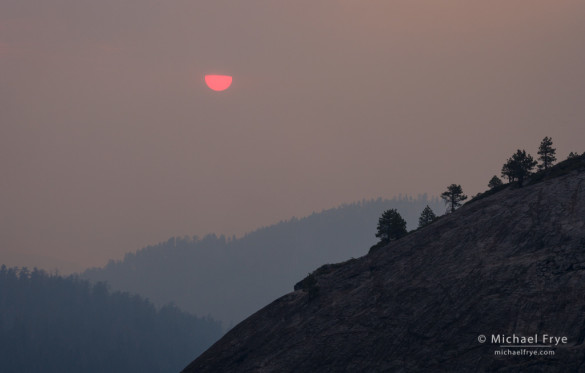 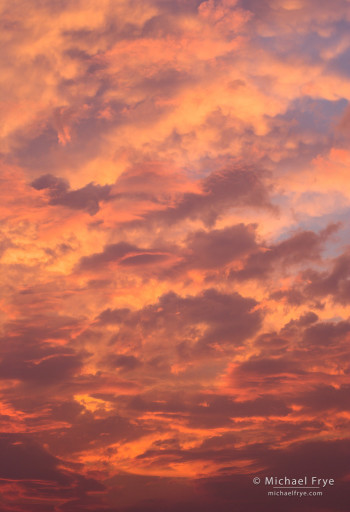 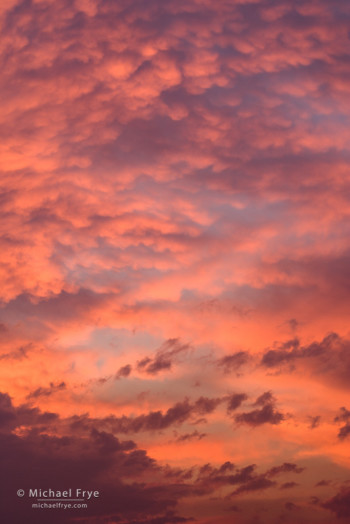