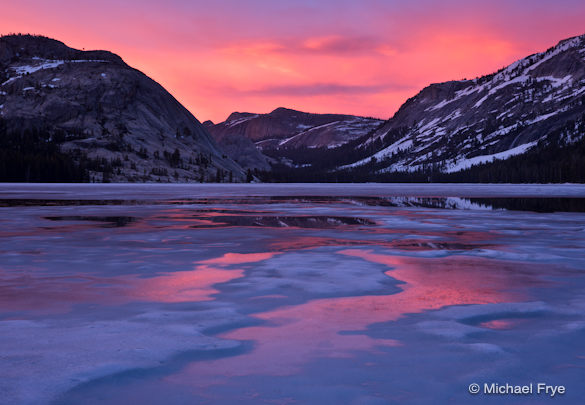 Tioga Pass opened Saturday, making the Yosemite high country accessible again. We always like to see this terrain when it’s still covered in snow—a taste of winter in May or even June—so Claudia and I drove up on Saturday afternoon. There was a lot of snow, but based on reports we heard during the last two weeks we actually expected more. The recent warm weather has melted the snowpack quickly. But, as you can see from the short video below, we found some large snow banks, and Tenaya and Tioga Lakes were still mostly frozen.

Skies became increasingly overcast Saturday afternoon, so I photographed abstract patterns and subtle colors in the ice at Tenaya Lake, not expecting much of a sunset. But late in the day I noticed a hint of purple in the clouds, and soon the sky exploded into shades of red, allowing me to capture the image at the top of this post.

We ran into many photographers we knew along the road, and especially at the ever-popular Whoa Nellie Deli in Lee Vining. We had dinner with William Neill and family, and found G Dan Mitchell at the Cafe Latte Da Sunday morning. Earlier Sunday we ran into Vidya, a former workshop student and frequent commenter on this blog, and she suggested I create a Flickr group for people to share photos from Tioga Pass this weekend. Great idea! So if you photographed along the Tioga Road this past Saturday or Sunday, I’d love to see what you captured. Either post a link to images in the comments here, or upload them to the Flickr group.

Meanwhile, at lower elevations many flowers are blooming. There are still a few dogwoods in decent shape along Highway 120 between the entrance station and Crane Flat. In Yosemite Valley the cow parsnip and azaleas are just starting to appear. Irises were abundant in El Cap Meadow last Tuesday, but some may have been drowned by high water on Thursday!

Hot weather is forecast to return tomorrow and Wednesday, so the water level in Yosemite Valley should go back up, and minor flooding is expected again. I’ll be posting photos and video of last week’s high water here soon.