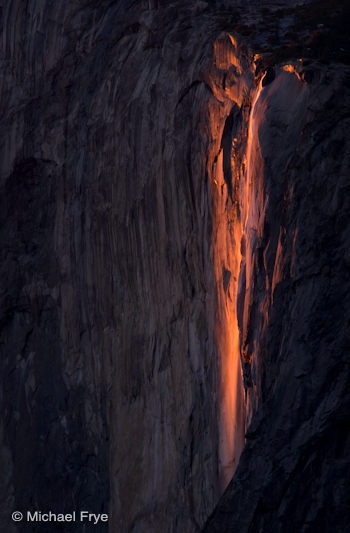 Last Friday I was in Yosemite Valley being interviewed by Steve Bumgardner for a segment of his Yosemite Nature Notes video series. After the interview I decided to head over to the Southside Drive viewpoint for Horsetail Fall. Skies were clear to the west, so the waterfall got that last orange light, but as you can see from this photo there wasn’t a lot of water. It’s a decent flow for this ephemeral fall, better than in some years, but a little below average. Compare the accompanying photo to this one from 2010, or another from 2009. Of course none of these approach the tremendous volume of water in my image from February 1995.

Despite the less-than-spectacular flow, clear skies last weekend allowed many people to capture some nice Horsetail Fall images. You can find links to a few of those photos in the comments of my last post about Horsetail from February 8th.

Meanwhile, a snowstorm deposited about six inches of snow on the valley floor yesterday. Another larger storm is predicted to bring snow tonight through Saturday. We may get a break Sunday or Monday, so Horsetail photos might still be possible again this year. The cold weather has diminished the flow in Horsetail even further, but one warm, sunny day could revive it.

But hey, Horsetail, schmorsetail—we’ve got snow! And clouds, and the chance for clearing storm photos when the next system departs. After six weeks of rather bland skies, it’s nice to see some interesting weather. We could have some great photo opportunities in Yosemite over the next week.

I’ve had a busy workshop schedule, plus a last-minute writing assignment, so I haven’t been able to devote time to the next photo critique, but I should be able to post that next week. I think it will be an interesting one, so stay tuned!