The Dead Have Their Day—Again 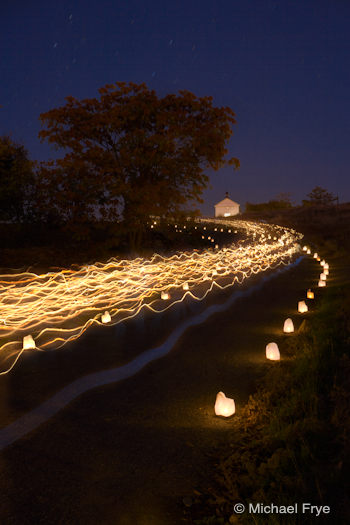 Last year Claudia and I attended theDay of the Dead (All Soul’s Day) celebration in Hornitos for the first time. Hornitos is a tiny town in the Sierra foothills near my home in Mariposa. During the 1850s over 15,000 people lived there; now the residents number less than a hundred. But every November 2nd the town’s population swells, and several hundred people form a silent, candlelit procession from the town up a hill to the old church and graveyard, where they participate in a ceremony honoring the departed.

As I wrote last year, Claudia and I both found the ceremony moving and inspiring, and knew we had to return. Tuesday night we attended the event for the second time. We loved it, again; in our noisy world it’s wonderful to see hundreds of people holding candles and walking silently, solemnly through the night to an old graveyard. Although neither of us are practicing Catholics, we can appreciate rituals that help connect us with some of the more essential and elemental aspects of life and death.

Last year I made some good images, but it’s difficult to photograph something like this when you’ve never seen it before, don’t know what to expect, and only have one chance at it. This time I had a plan. I positioned myself where I could see the curving line of the procession walking up the hill toward the church. With the camera locked on a tripod I made an exposure at dusk to capture some of the ambient light, then made a further series of long exposures as the procession passed by. The pieces were assembled in Photoshop. The squiggly lines were made by candles that people held as they walked up the hill. The blue streak is actually the viewing screen of a video camera dangling from a man’s shoulder as he walked up the hill—a nice touch of color, and the line helps fill in an otherwise empty space in the composition.

Some photographs are created spontaneously; others require planning. This is obviously an example of planning, as is my photograph of Horsetail Fall by moonlight. But most of my best images were made by simply reacting to what I saw around me—fleeting light or weather, or maybe just aninteresting arrangement of elements that could make a compelling composition. Planning and flexibility are both essential tools in a photographer’s kit.

Next November 2nd I may leave the camera at home and actually join the procession. Then again, I might not be able to resist trying to capture an event with such rich photographic potential. Either way, I’ll be there.