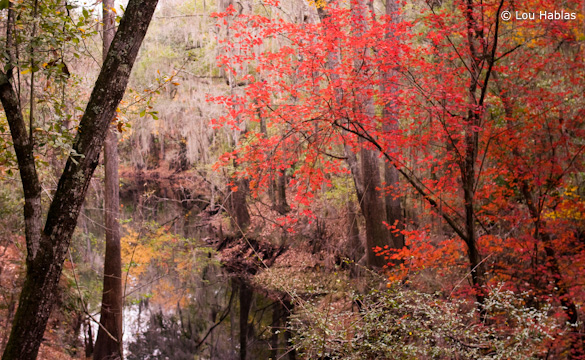 This week’s photograph, by Lou Hablas, is from O’Leno State Park in Florida. Did you know they had fall color like that in Florida? I sure didn’t.

Lou said that he made this photograph on an overcast and sometimes rainy day while on a hike with his family. That weather provided perfect conditions for this subject. I mentioned last week how soft light enhances colors and color contrasts, but it has another benefit: simplification. Forests have random, chaotic configurations of branches, trunks, and leaves. Sunlight filtering through the trees creates splotchy patterns of light and dark, further adding to the visual confusion. Soft, even light helps simplify such scenes.

But forests are still difficult to photograph, even on an overcast day, because it’s hard to create visual order out of so much chaos. I think Joe did a pretty good job of finding a coherent design; we grasp the main ideas easily, and it doesn’t seem too confusing. The main focal point is the red maple on the right side, and its Y shape echoes the lines of the trunks on the left edge of the frame, giving this image structure and repetition.

While soft light can help simplify forest scenes, it’s essential to keep the sky out of the frame.  The overall design of Lou’s photograph works pretty well, but the bright patch of sky at the top of the picture and its reflection below both pull attention away from more interesting objects, like the red tree. To make matters worse, the sky is right along the edge, causing the viewer’s attention to bleed out of the frame. One solution would be to crop both the top and bottom of the picture. This creates a semi-panoramic shape, which is fine, but the unintended side effect is that it emphasizes the trees on the left; they seem too prominent, and draw attention away from the red maple.

So what’s the solution? Before reading on, look at the original photo at the top of the page. What catches your eye the most?

Most people will probably say the red tree; that was certainly my answer. And I know that’s what originally attracted Lou to the scene, as he told me as much in an email. He also told me that he then noticed other elements, like the lake, moss, other trees, leaves on the ground, etc., and tried to include those in the composition.

This is a common dilemma when composing landscape photographs. Something grabs your attention, then you notice other interesting things around it, and you want to include those too. The question becomes, do those other things add to the photo, or distract from your original idea?

And the answer is… it depends. Every situation is different. If the other elements create an interesting juxtaposition with the original subject, and you can include them without adding unwanted clutter, then those additions might improve the image. But typically it doesn’t work that way—more complexity usually means more confusion and distraction. 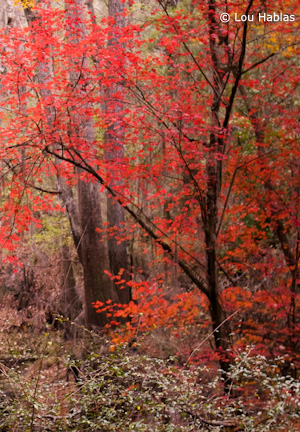 Vertical crop of the red tree

That red maple is a very strong subject. It has great color, plus good lines and structure. It’s interesting enough by itself to make a good photograph—it doesn’t need anything else. So here are two other crops that fill most of the frame with just that tree. I’m sure there were many other possibilities, but these work.

The moral of this story is: When in doubt, stick with your original idea, the thing that caught your eye and motivated you to take the picture in the first place.

Technically, this image looks properly exposed, and the white balance, contrast, and saturation seem about right. A larger view shows that the background is out of focus. Lou mentioned that this photograph was made a couple of years ago, and there are things he would do differently now, like stopping down the aperture to get more depth of field—a good idea.

Thank you Lou for sharing your image! You can see more of his work on Flickr.

I’ll be taking next week off to celebrate my wife’s birthday, but I’ll be back with another critique on March 16th or 17th.

If you’d like your images considered for future critiques, just upload them to the Flickr group I created for this purpose. If you’re not a Flickr member yet, joining is free and easy. You’ll have to read and accept the rules for the group before adding images, and please, no more than five photos per person per week. Thanks for participating! 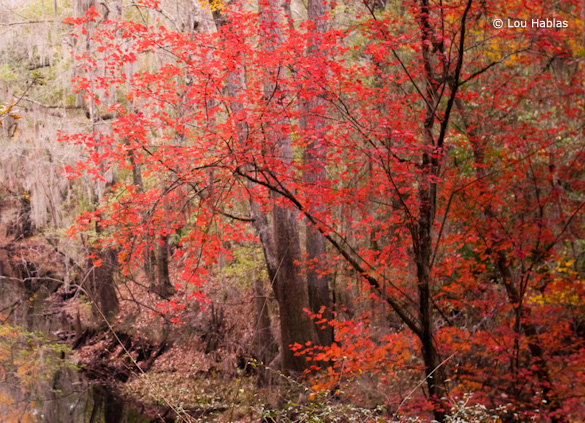 Horizontal crop filling most of the frame with the maple