In the Alabama Hills 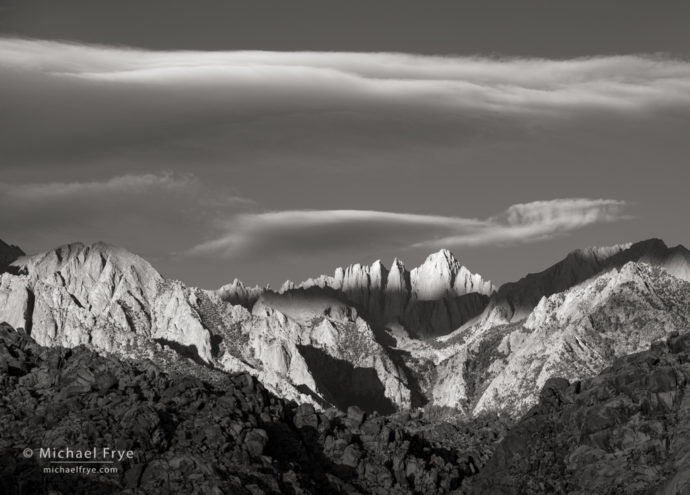 Sunrise on Mt. Whitney from the Alabama Hills, CA, USA

On our trip to the eastern Sierra last week Claudia and I made a detour down to the Alabama Hills. This area is a bit further from home than our usual eastside haunts, so we don’t go there often, and I sometimes forget how amazing it is. The jumbled rocks of the Alabama Hills are interesting and photogenic in their own right, but combined with the abrupt escarpment of the mountains to the west… well it’s just spectacular.

I woke up early at our campsite Wednesday morning, just at first light, and noticed there were a lot of clouds drifting overhead. Time to get going! Most of the clouds were to the east. I found a view I liked in that direction, only to be disappointed when the clouds didn’t light up as I had hoped. But then a wave cloud suddenly formed over the mountains to the west. I quickly moved to a different spot, looking west toward a V-shaped notch in the boulders underneath Mt. Whitney. The mountain itself was shadowed at first, but then the sun broke through the cloud layers and lit the peak.

As always, I tried to adapt my compositions to the changing light. In the photograph above I liked the layers of light and dark above and below Mt. Whitney, so I zoomed in on that area to emphasize those layers (the focal length was 100mm). Layers – either bands of light and dark or layers of different colors – are a common compositional theme in landscape photography. These horizontal bands work because they create repetition, and they’re something I look for and try to recognize when they occur.

A few minutes later the sun reached the foreground rocks. The texture of the rocks to the left of Lone Pine Peak caught my eye, so I used a wider lens (50mm) to include some of those boulders, along with Lone Pine Peak, Mt. Whitney, and the clouds:

The clouds persisted all day. At times we could see that it was raining or snowing up on Mt. Whitney. As sunset approached there were a lot of clouds to the west – too many, actually, because they blocked the light. But at one point sunbeams broke through the clouds right above Mt. Whitney. The contrast was extreme, so for this photo I bracketed three frames, two stops apart, and used Lightroom’s HDR Merge to blend the exposures: 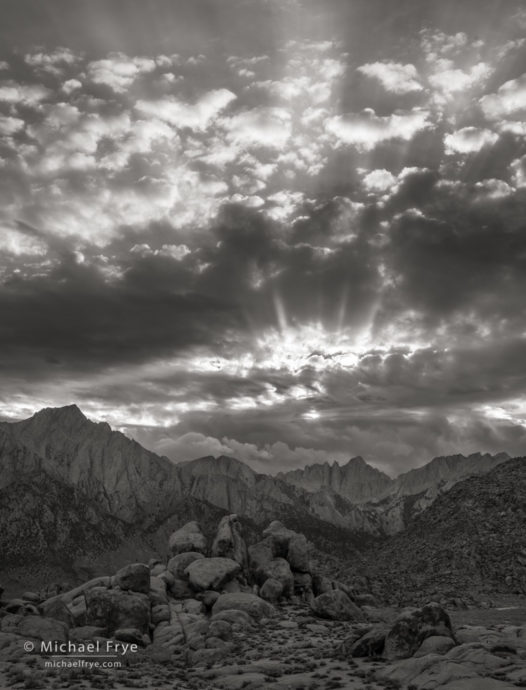 Sunset over Mt. Whitney from the Alabama Hills, CA, USA

We had a great time in the Alabama Hills, and I’m sure we’ll go back again soon. I feel so fortunate to live in this state full of such wonderful, diverse landscapes.