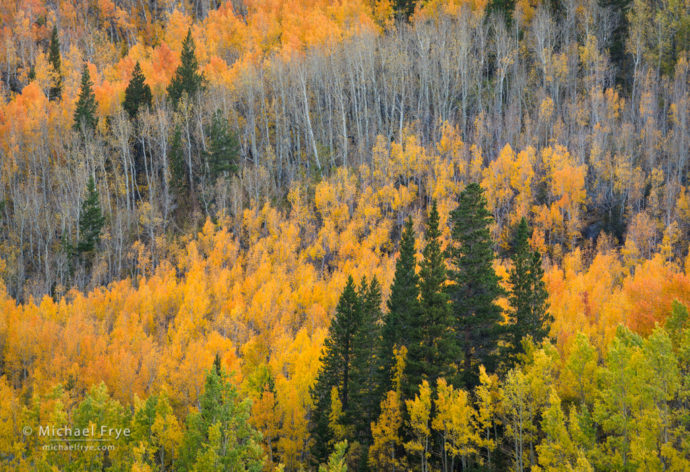 During our recent trip to the eastern Sierra I hiked up a trail I’d never been on before. I hoped the trail might lead to view overlooking a hillside full of aspens. It didn’t – at least not directly. I had to leave the trail and work my way out on some rock outcrops, where I did finally reach a spot with a view of that aspen-covered hillside, and made the photograph above.

I was pretty happy with that image; I liked the curving line of bare trunks, and the way the clumps of pines in the lower-right and upper-left corners played off each other. But my eyes kept getting pulled to some aspens next to the rock outcrop. The leaves on these trees displayed a wonderful kaleidoscope of hues – yellow, orange, red, green, even a bit of maroon. I realized that these aspens right in front of me had at least as much photographic potential as the ones on the distant hillside.

END_OF_DOCUMENT_TOKEN_TO_BE_REPLACED 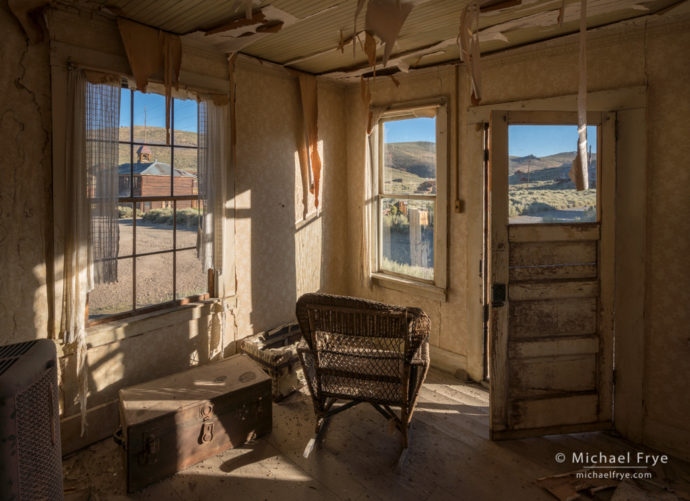 McMillan House interior, Bodie State Historic Park, California. The high contrast of this scene required using Lightroom’s HDR Merge. Also, I deliberately avoided having sunlit areas touch the borders of the image. A bright spot along the edge would pull the viewer’s eye out of the photograph.

Although I primarily photograph natural landscapes, I find the ghost town of Bodie compelling. Over the last few years I’ve had opportunities to photograph Bodie at night, and we’ve also obtained permits for our workshop participants to photograph the normally-locked interiors on several occasions. And recently we arranged a permit for me, Claudia, and a small group of friends to photograph those interiors.

As I’ve explored this place, I’ve realized that I’m not as interested in the abandoned mining equipment and machinery, as fascinating as some of those things are. I’m drawn more to the places where people once ate and slept and drank and socialized, and left behind the artifacts of their lives – furniture, cooking utensils, books, magazines, pictures, cans, bottles, a baby carriage, a bird cage, sewing machines, coats, pants, hats, shoes…

END_OF_DOCUMENT_TOKEN_TO_BE_REPLACED

The Art of Being Flexible 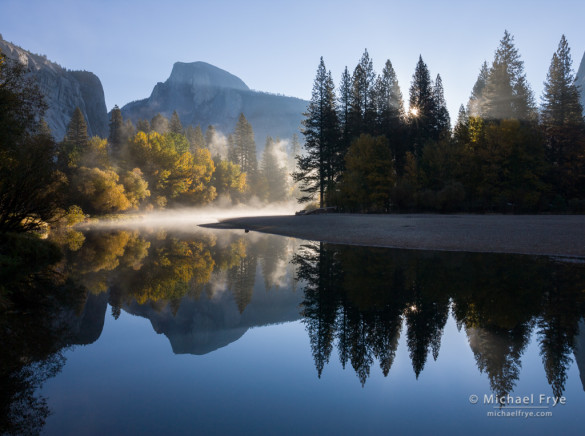 Autumn Sunrise, Half Dome and the Merced River, Yosemite – one of the examples in my latest article for Photograph magazine

We can’t control the weather. We don’t determine where trees grow, mountains form, or rivers flow. In landscape photography we have almost no control over our subjects, so we have to adjust to the conditions at hand.

Craft & Vision just released Issue 15 of Photograph magazine, which includes my piece called “The Art of Being Flexible.” I think flexibility is an essential skill for landscape photographers. Since we have so little control over our subjects, we have to be willing and able to react to changing weather and conditions, and try to take advantage of whatever opportunities present themselves, even if those opportunities weren’t what we expected. The article discusses this subject in depth, and includes several examples showing how to anticipate the weather and light, recognize possibilities, and take advantage of the opportunities you’re given.

END_OF_DOCUMENT_TOKEN_TO_BE_REPLACED

The Power of Visualization 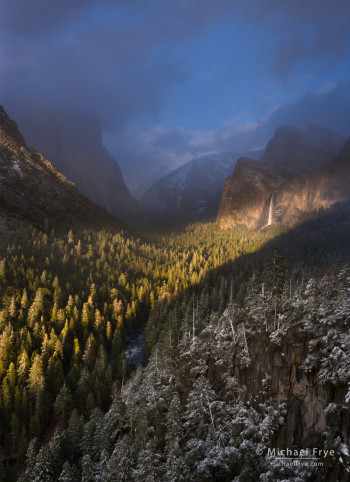 “The term visualization refers to the entire emotional-mental process of creating a photograph, and as such, it is one of the most important concepts in photography.”
— Ansel Adams

I’ve become increasingly aware of the power of visualization over the years. Looking back through my own work, it’s clear that my best photographs were created when I had a strong response to a subject or scene, knew the feeling I wanted to convey, and was able to visualize in advance how I wanted the finished image to look.

But what does visualization mean, and how does it apply to digital photography today? Although Adams mostly talked about visualization in relation to technique, he also made it clear that visualization was part of the creative process. He wrote: “Visualization is a conscious process of projecting the final photographic image in the mind before taking the first steps in actually photographing the subject. Not only do we relate to the subject itself, but we become aware of the its potential as an expressive image.”

END_OF_DOCUMENT_TOKEN_TO_BE_REPLACED 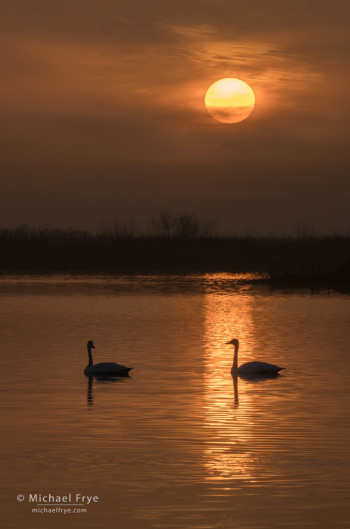 Tundra swans at sunrise in a San Joaquin Valley marsh

This photograph of tundra swans seemed appropriate today. Swans mate for life, so you always see them in pairs, or in a small group when parents are joined by their young cygnets. The two subjects of this photograph were undoubtedly a mated pair.

One of the challenges of photographing these swans was that they kept their heads underwater for long periods of time while they were feeding. Periodically one of their heads would pop up briefly, but then plunge underwater again, and it was rare for both swans to have their necks raised at the same time. I expended many pixels trying to capture moments when both swans had their heads up. Even when I managed to catch both of them with their heads visible, often one of the swans would have its back to me, or be in some other awkward position.

But I stayed alert and patient, and eventually things came together. Both swans lifted their heads for maybe ten seconds – an eternity, it seemed – while I held down the shutter button. At one point the swan on the left even turned its head and looked back at the swan on the right. Perfect. That little gesture made a big difference in the photograph by creating a visual connection between the two swans.

END_OF_DOCUMENT_TOKEN_TO_BE_REPLACED 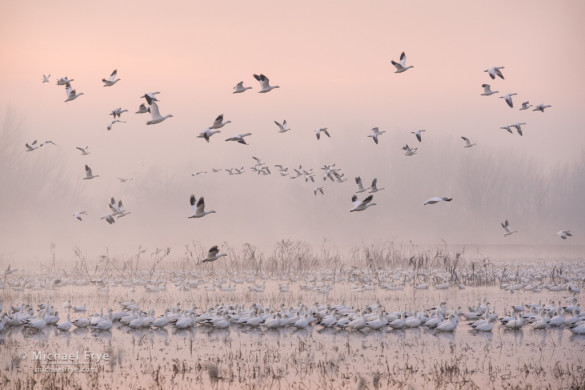 Claudia and I have made several trips to California’s Central Valley this winter to photograph birds. It’s one of our favorite things to do this time of year, when large flocks of waterfowl take up residence in the valley’s marshes for a few months before migrating northward in the spring. I love watching and photographing the movements of these flocks, especially the white geese – the snow geese and Ross’s geese. Seeing 10,000 geese take off in a single, noisy, coordinated wave is simply awe-inspiring, but there’s magic and beauty in their smaller comings and goings as well.