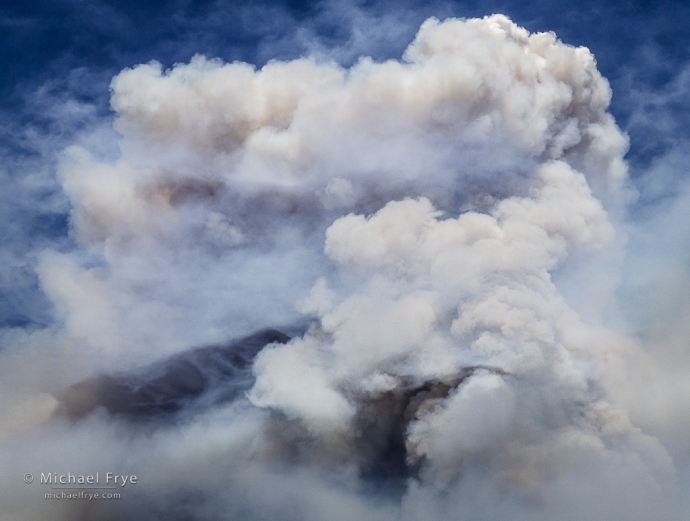 Pyrocumulus cloud from the Oak Fire, Mariposa County, California, on Saturday afternoon. The dark areas near the bottom of the frame are actually black smoke.

I’ve received many messages expressing concern for Claudia and I about the Oak Fire near our home outside of Mariposa. So first, thank you all very much for your concern! Claudia and I are safe (and our four kitties too). We had to evacuate Friday night, and are staying at a friend’s house in town. Shortly after we evacuated the fire came through our neighborhood and property, but we’ve heard that our house is still standing. We also heard that fire crews worked through the night to save homes in our area, including ours, and were apparently successful in doing so, as no homes in our neighborhood have been lost as far as we can tell. We’re not out of the woods yet, but hopeful, and feeling very grateful to the firefighters for all they have done and continue to do. Some people have lost their homes in this fire, and our hearts go out to them. Fortunately no one has been injured so far.

I’d also like to express my appreciation to the volunteers from CCADT (Central California Animal Disaster Team) for taking such good care of our cats, and all the creatures in their care. This is a stressful situation for all the animals that have been abruptly moved from their homes, but most of them seem quite calm once they’ve settled into the routine at the shelter. Our cats certainly like being there a lot more than being in our cars.

The Oak Fire started at around 2:00 p.m. on Friday, and spread rapidly. Claudia and I were hiking in the Yosemite high country that day, and didn’t learn about the fire until we got back into cell range at about 7:00 p.m. We drove home as quickly as we could, but a drive that normally takes about two hours took three due to maddeningly slow traffic (including a rented motor home that wouldn’t use a turnout) and a detour around a portion of Highway 140 that was closed by the fire.

Luckily our house wasn’t in a mandatory evacuation zone yet, otherwise sheriff’s deputies wouldn’t have allowed us into our neighborhood. We started gathering our essential belongings, and preparing to get our cats into carriers and cages and into the cars. At one point we thought we actually had a bit of time, as the fire didn’t seem that close. Then I went outside, and suddenly the fire looked ominously near. I estimated it was about half a mile away. We could hear a dull roar from the flames, even at that distance. We also heard a couple of loud, distant explosions as flames reached propane tanks. This is what the fire looked like (and sounded like) from our house shortly after that (my office/studio is in the foreground):

Moving with more urgency, we loaded everything into our cars, gathered the kitties, and drove away. We only went a couple of miles to a spot that had a good view of the fire, and watched it for awhile. At that point, inexplicably, our neighborhood wasn’t yet under an evacuation order. We realized we had forgotten a few things, so we decided to see whether we could get back to our house. We could, though the fire was clearly even closer. We got in and out quickly.

Soon after we got back to our viewpoint the portion of the fire nearest our house flared up, with huge flames reaching into the sky. Disconcerting, to say the least. But we had done all we could, and could only wait and hope for the best.

Finally, at about 3:00 a.m., the sheriff’s department issued a mandatory evacuation order for our home neighborhood. We were certain the fire had already reached that area by then, but better late than never, and I’m sure the sheriff’s department was overwhelmed by this explosive fire. But no one on our road needed anyone to tell them to get out – it had been plainly obvious since at least midnight. Though one of our neighbors apparently did stay – something I can’t imagine doing after seeing and hearing the fire approach.

The next day one of our other neighbors somehow made his way past the barricades and into our neighborhood, and reported back to us that though the fire had clearly moved through our area, all the homes he could see, including ours, were still standing. He saw a fire truck and crew at our house, working on suppressing hot spots. Needless to say, that was great news.

As I write this the fire has expanded to over 14,000 acres (and climbing), with 0% containment. It’ll probably be awhile before we can return to our home, but we’re fine, and grateful that it looks like we’ll have a home to go back to. We hope firefighters can get some containment on this fire soon, and hope that no more homes will be lost – and that everyone stays safe.