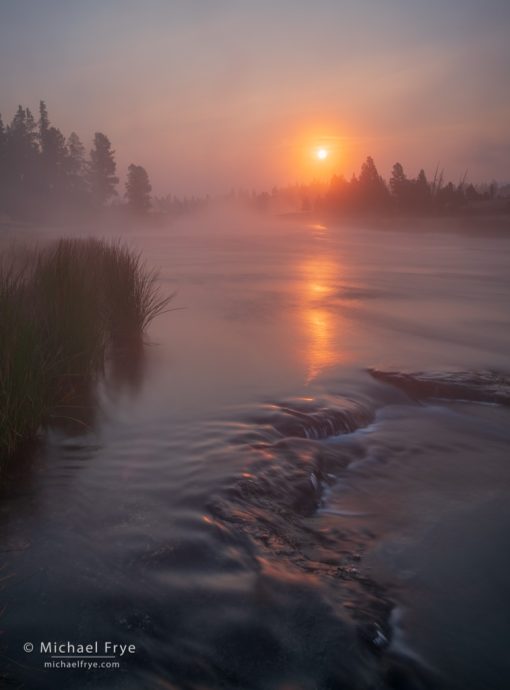 I usually talk about photography as an art form – a way to express yourself and your vision, and to communicate with others through this wonderful medium.

But photographs also have an amazing ability to evoke memories. Sometimes a well-executed image made by someone else will resonate with us because it stirs a memory of a past event in our lives.

Naturally though, photographs from our own lives can be even more powerful in evoking memories from our past. Most of us have had the experience of looking through old family photos, and suddenly having a vivid recollection of an event we hadn’t thought about in years. It doesn’t matter if the images themselves are mediocre; they still have tremendous power to stir recollections.

I was reminded of this power recently on our trip to Yellowstone. Claudia, Charlotte, Gary and I were exploring a trail at sunrise. We found some mist along a section of river just as the sun poked over the horizon. Charlotte, Claudia, and I all recognized a beautiful scene when we saw it, so we got out our cameras and started looking for compositions.

I started with a view from above the river, but then decided to get down by the bank, and liked what I found, with some small rapids reflecting the sun, and a patch of reeds on the left side. I composed, focused, and bracketed a series of exposures, which I later blended with Lightroom’s HDR Merge. (See the photo at the top of this post.)

After capturing that scene, I picked up my camera and tripod and moved upriver a short distance, looking for other possible compositions. And then I heard something.

The rapids, though small, made a lot of noise. But above the din I thought I heard howling.

A few days earlier I was at Grand Prismatic Spring at night, photographing the Milky Way over the blue mist. This is a popular place for night photography, so I wasn’t surprised to be joined by a group of six other people who stationed themselves near me along the boardwalk. A couple of them were taking photos, while the rest seemed to just be hanging out, enjoying the night sky. They politely kept their lights off while I captured a sequence of photos.

Then at one point I noticed some of their headlamps coming on. I turned, and realized they were all looking at something off to the right and behind us. Apparently it was an animal. One of them said, “What should we do?”

Then, by the dim light of their headlamps, I spotted a canine trotting by, no more than 50 feet behind us. At first I thought is was a coyote, and said so. But the man next to me replied, “It’s too big for a coyote. And besides, it has a radio collar.”

I took another look. Sure enough, it had a radio collar. And it was rather big. And by now I could also see that it had dark legs, and a lighter body – a color pattern that coyotes never have, but wolves sometimes do.

I had never seen a wild wolf before. Seeing a wolf was definitely something I wanted to do while in Yellowstone, but I didn’t expect that my first sighting would be at one of Yellowstone’s most popular attractions – and at night.

By now the animal was past us, moving at a brisk trot. With only a brief look by the dim light of some headlamps, I still wasn’t completely sure it was a wolf, so I hurriedly dug my brightest flashlight out of my pack and started running down the boardwalk after it, hoping to confirm the sighting. Unfortunately I never got close enough again. But I did see another, lighter-colored canine join the first animal, before they both disappeared into the night.

Meanwhile, the people next to me were a little freaked out. I reassured them, saying, “It’s only a wolf. It won’t hurt you.” Wolf attacks on humans in North America are exceedingly rare, and these animals were clearly just traveling through, with no interest in us.

A few days later Claudia, Charlotte, Gary and I were driving along a road early in the morning, with Claudia and me in the lead vehicle, and Charlotte and Gary behind us. Claudia and I spotted a canine trotting down the road in front of us. We pulled up alongside it, and this time there could be no doubt: it was a wolf. It payed little attention to us, and kept trotting down the road, following a scent. We followed it, slowly, in our cars, while Claudia and I tried to take videos with our iPhones in the dim light. Finally the wolf found what it was looking for: a piece of hide with some fur on it. It dragged that into the woods, then found another similar piece of hide and dragged that into the woods. Here’s a short video of that sequence. The quality isn’t great, but it shows what it was like to view this wolf in the dim pre-dawn light:

We were all very excited about that sighting. Charlotte, as it turns out, had her camera and 100-500mm lens on her lap, and got a couple of beautiful photos. She graciously let me include one of them here: 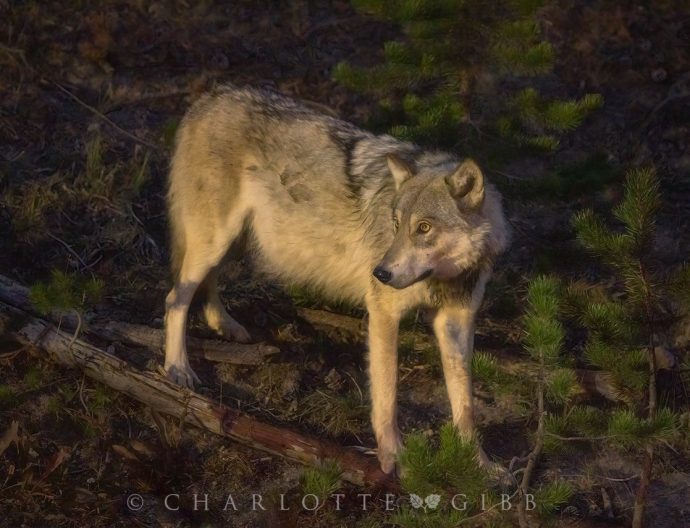 Later that day I told everyone that now, having definitely seen a wolf, I wanted to see a black wolf. And better yet, I wanted to hear them howling.

A few days later, while photographing that sunrise by the river, I ran away from the rapids so I could hear better. And sure enough, I heard howling. And it was definitely wolves, not coyotes. (I’ve heard coyotes howl many, many, many, times.) Not only that, but, along with the low-pitched, moaning howls of the adult wolves, I could hear the high-pitched yips of pups!

I yelled at Claudia, Charlotte, and Gary to come listen. At that point we were able to hear a group of wolves (including those pups) howling to our east, and another lone wolf answering to our west.

I put on my 100-400mm lens, and made a quick decision to head west toward the lone wolf. It sounded closer, and I also knew from my experience with coyotes that animals with pups were likely to be much warier of people.

I jogged off to the west, followed by my three companions. And within a minute I spotted a black wolf trotting diagonally toward me, apparently headed toward the other wolves. I moved a little closer to get a better view. The wolf spotted me and stopped in its tracks. I snapped off a few photos; the wolf was a black dot in the viewfinder, but it was there. Claudia, Charlotte, and Gary came up beside me, and we all watched as the wolf stared back at us, then trotted off to our left, stopped, howled, trotted, and howled again.

Eventually the black wolf circled around us. We looked for the main pack, but didn’t find it.

My one decent photo of this wolf isn’t going to win any awards. But it’s a precious image to me, because it evokes the memory of that wonderful encounter with a wild, black wolf, and the sound of an entire pack howling – complete with pups. 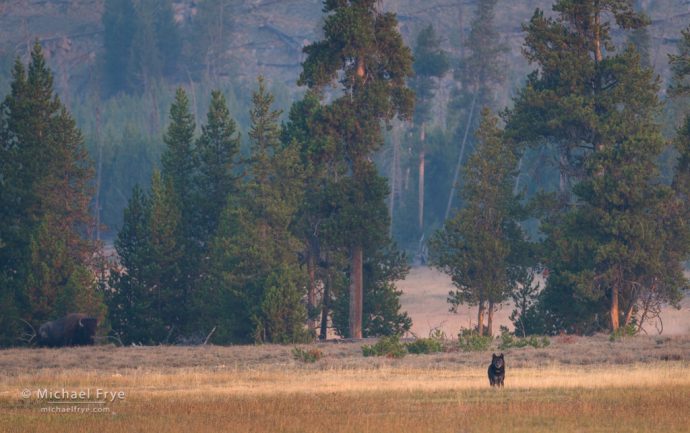 By itself, I like the photograph of the sunrise by the river much better. And that also evokes similar memories, because I know what happened right after I took it. And by the same token, my nighttime photograph Grand Prismatic Spring reminds me of my first encounter, in the dark, with two wolves (well they were probably wolves anyway).

Later that morning we were hiking along a trail, following the fresh tracks of a grizzly, and seeing abundant footprints of wolves as well. Three other hikers came along, and we struck up a conversation with them. It turned out that, by chance, we had run into just the right people, as they were very knowledgable about wolves. One of them, Julie Argyle, showed us some of her spectacular wolf images on her phone (check out her Instagram feed), and quizzed us about the wolves we had seen and heard. We learned that the wolves we had encountered were part of the Wapiti Lake Pack. Julie also told us that the black wolf we saw that morning was probably either 1234M or 1235F. (We think it was most likely 1234M). 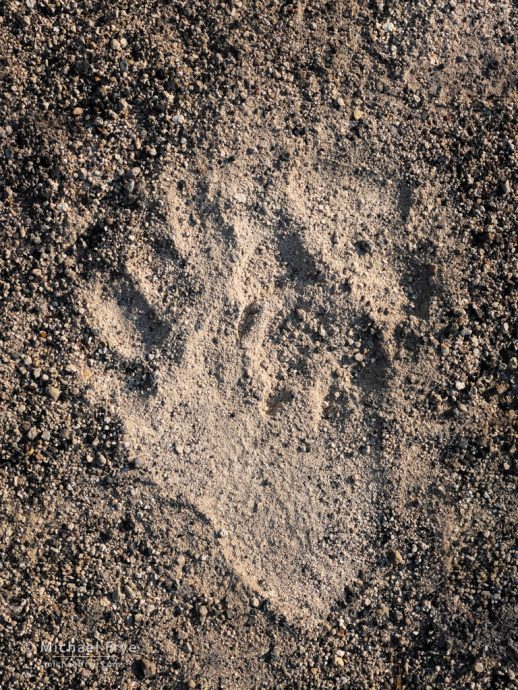 Julie also told us about the wolf hunt that is now underway in Montana. For a little background, by the 1930s wolves were hunted to near-extinction in the lower 48 states, with just a small population remaining in northern Minnesota. In 1974 gray wolves were listed as an endangered species, and as part of the recovery plan, wolves were reintroduced to Yellowstone and central Idaho in 1995. Since then, the population of wolves in the northern Rockies has expanded, to the point where they were (controversially) removed from the endangered species list in 2008.

Since this de-listing, wolves have been hunted in the states bordering Yellowstone (Idaho, Montana, and Wyoming), but in a limited fashion. This past August, however, Montana enacted new, “aggressive” regulations that allow essentially unlimited hunting of wolves, using any methods, including trapping and snaring. And since Yellowstone wolves roam outside the boundaries of the park, many of them are likely to be killed.

For me, wolves are a symbol of wildness. I love the western U.S., an area that used to be known as the Wild West. When wolves were extinguished from these states, some of that essential, wild character of the land was lost. And then, miraculously, wolves were brought back.

I think reasonable arguments can be made for limited, regulated hunting of wolves. But to me, Montana’s new regulations go beyond reason – they’re an all-out war on wolves.

For Claudia, Charlotte, Gary, and me, seeing wild wolves was the highlight of our trip to Yellowstone. I saw nineteen wolves in all, and each sighting was a special occasion, a reminder of the wild character of this land that was once lost, and then restored. And each time I look at these photographs it brings back vivid memories of our wolf encounters.

P.S. If you want to learn more, here are some articles about Yellowstone wolves and the Montana wolf hunt: