Return to the Redwoods 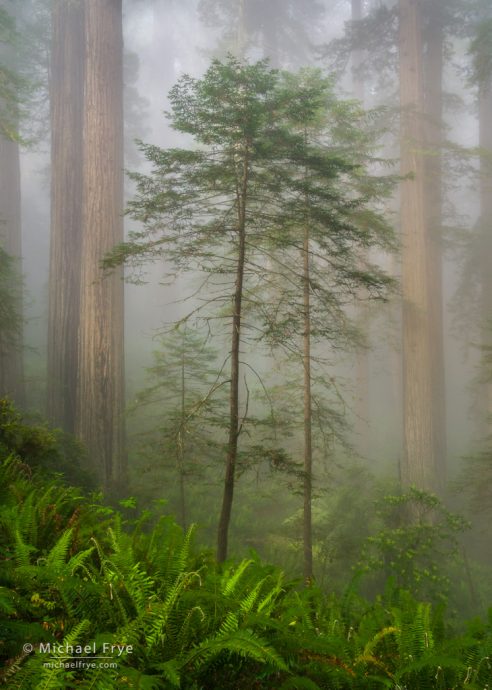 Young and old redwoods, Northern California. Soft sunlight filtering through the fog added a beautiful and unusual mood to this scene, and I loved the juxtaposition of young and old trees. 25mm, 1/6 sec. at f/16, ISO 800.

Until last year, Claudia and I had visited the redwood forests of northern California nine years in a row. The pandemic interrupted that streak, but in late May this year we were able to return once again, and spent almost two weeks in the area.

It was great to be back, as I love this part of the world. While Yosemite has been my home, both physically and spiritually, for over 35 years, returning to the redwoods also feels like coming home. It’s a much different environment – damp, cool, foggy, lush, and overgrown – and that’s what I love about it. Many places look like they could be sets from a Jurassic Park movie (which, of course, they were). It’s not hard to imagine dinosaurs roaming this terrain.

The forests hadn’t changed much in our absence. To the redwoods, some of which have been alive for over a thousand years, the pandemic meant nothing. The ferns were in good shape, despite the dry winter. The rhododendrons bloomed late this year, but their bloom is highly variable, so even that seemed normal.

And while rhododendrons are nice, I’ll take fog and no rhododendrons over rhododendrons and no fog any day. And we had lots of fog, plus several occasions where we got to photograph sunlight breaking through the fog.

Photographing such a familiar place is both wonderful and challenging. My intimate knowledge of these locations makes it easier to know where to go in different weather conditions, which is helpful in adapting to the constantly-changing fog that’s so characteristic of this area.

On the other hand, it can be challenging to find new ways to photograph these familiar scenes. I never set out with the intention of doing something “different,” as I think that mindset can lead to making photographs that look forced and artificial. I’d rather just explore the forests, photograph whatever I’m inspired to photograph, and see where that leads. In the redwoods there’s a lot to see, with an infinite number possible subjects and views, so I’m constantly noticing new things, even on trails I’ve walked many times before. And the fog or light at a particular moment can transform an often-viewed scene into a completely new one.

Here’s a small portfolio showing some of my recent images from the redwoods. It was so good to be back, and we’re already thinking about returning later this summer. 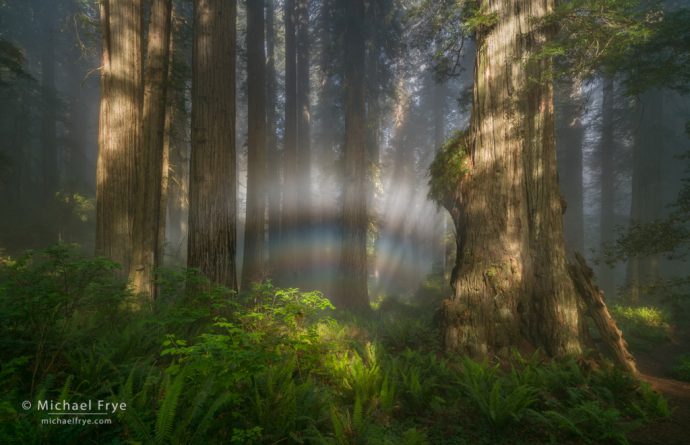 Fogbow in a redwood forest, northern California. This was the most vivid fogbow I’ve ever seen, with at least three distinct bands. Although the fogbow and its bands were clearly visible with the naked eye, a polarizing filter helped bring out the color. 17mm, 1/4 sec. at f/16, ISO 100. 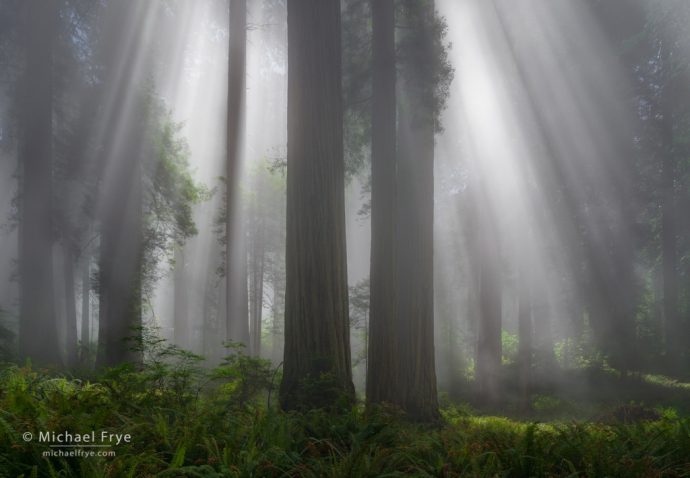 Redwoods and sunbeams, Northern California. I made this image just after noon, so the sun was high overhead. Rather than pointing my camera up toward the sun, I looked for scenes with sunbeams or sunlight hitting the forest floor, and found this composition with a central cluster of redwood trunks forming a key visual focal point, and the beams falling on either side. 22mm, 1/20 sec. at f/16, ISO 200. 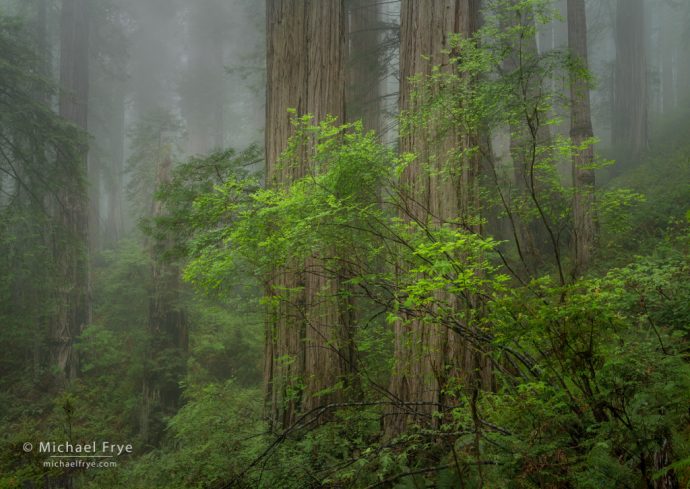 Redwood forest in fog, northern California. On this afternoon I found fog along a short stretch of trail where I’d never seen fog before, so that was a treat. Compositions weren’t easy to locate, but I liked this juxtaposition of a green shrub with the redwood trunks. 31mm, 1.5 seconds at f/16, ISO 100. 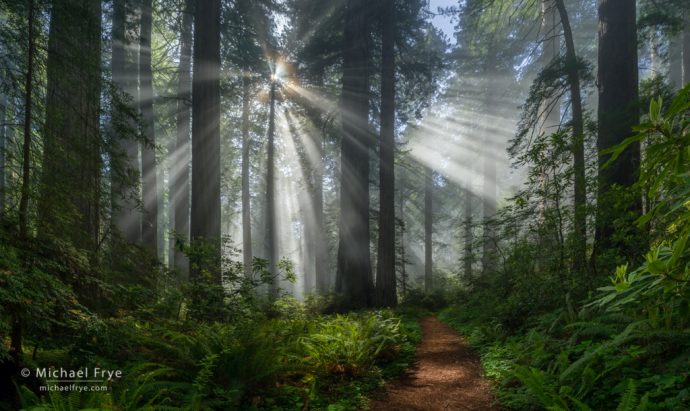 Path through redwoods, northern California. My widest lens (16mm) wasn’t wide enough to fit the sun, sunbeams, and path in the frame, so I had to stitch multiple images together into a panorama. The high contrast also required bracketing, so I used Lightroom’s HDR-Panorama Merge to blend the bracketed frames and stitch the panorama together in one step. 16mm, stitched, each section was five bracketed frames, two stops apart, at f/16, ISO 250. 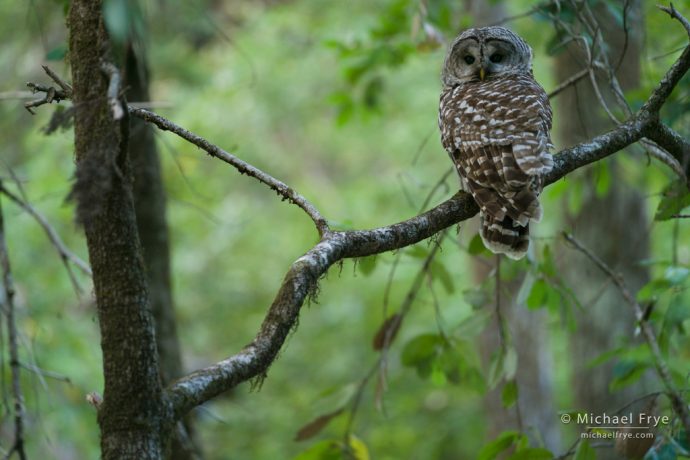 Barred owl in a northern California forest. On our way home Claudia and I visited a redwood grove in Mendocino County, and found this owl just outside the grove. 345mm, 1/15 sec. at f/5.6, ISO 800.

Related Posts: A Magical Morning in the Redwoods; Simple and Complex