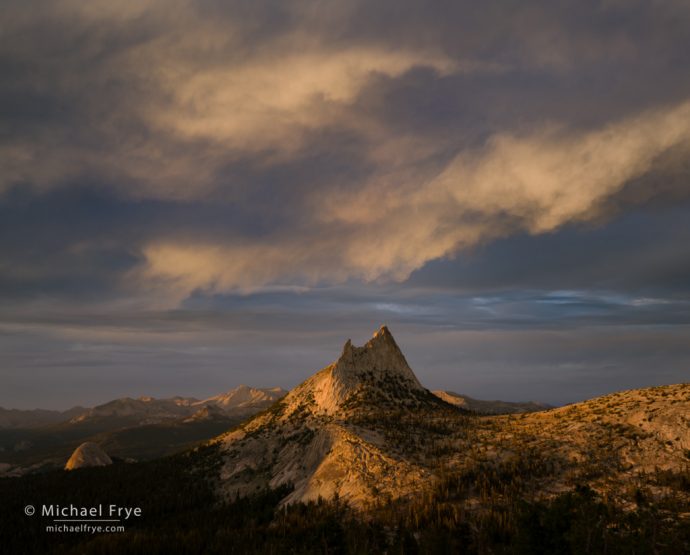 Summer is the dry season in California. Typically, in most of the state, one sunny day follows another, for months on end.

But there are a couple of exceptions. Along the coast, summer is the foggiest time of year. Fog can be so persistent that some spots may barely see the sun for days, or even weeks.

And in the high mountains the sunshine parade can be interrupted by periods of afternoon showers and thunderstorms. All it takes is for some moist, subtropical air to push up into the state from Mexico. That warm, moist air then gets lifted by the mountain slopes, triggering condensation, clouds, atmospheric instability, and thunderstorms.

We’ve been in one of those periods lately, with frequent afternoon thunderstorms in the high country. These storms are usually very localized, and therefore hard to predict. Forecasts can tell you, perhaps, when and where thunderstorms are most likely to occur, but the exact location and timing of a particular cell can make a big difference photographically – the difference between seeing a rainbow, or a spectacular sunset, versus finding completely uninteresting skies.

Last Tuesday the weather looked a little different. While possible showers were predicted for the higher elevations of the Sierra, forecast models showed more widespread afternoon clouds than usual – clouds apparently associated with a weak front.

I’m always willing to drive up to the mountains on short notice when there’s interesting weather, but driving is one thing, and making a long hike is another. I’d been looking for the right time to hike to a spot I’d picked out, with an expansive view, and a prominent peak in the foreground. But reaching this spot would involve about an eight-mile roundtrip hike, with a 1,600 foot elevation gain. I’d like a little higher odds if I’m going to make that kind of effort.

Tuesday seemed like a day when the odds would be a little higher, so Claudia and I drove into the park, and set out on our hike. Along the way I kept my eye on the clouds, and there were lots of them – too many perhaps, especially to the northwest. It seemed that those clouds could block the sunset. But the last satellite photos I’d been able to see showed the clouds moving east, with clear skies behind them to the west. So it seemed possible that the sun could crawl underneath those clouds as it set.

And sure enough, just as I reached my spot, the sun started to light some lower ridges. As the sun sank lower, the light gradually climbed higher, eventually reaching all the peaks, and the clouds. You can see my favorite moment in the photograph above.

Some clouds did eventually block the very latest light, so we started hiking down. We made most of the return journey in the dark, with headlamps, but we’re used to that. Hiking back in the dark after photographing a sunset a pretty common event in our lives. We got back to our car at around 10:30, and pulled into our driveway at about 12:45 a.m. We were tired, of course, but it was such a beautiful hike, and so much fun.