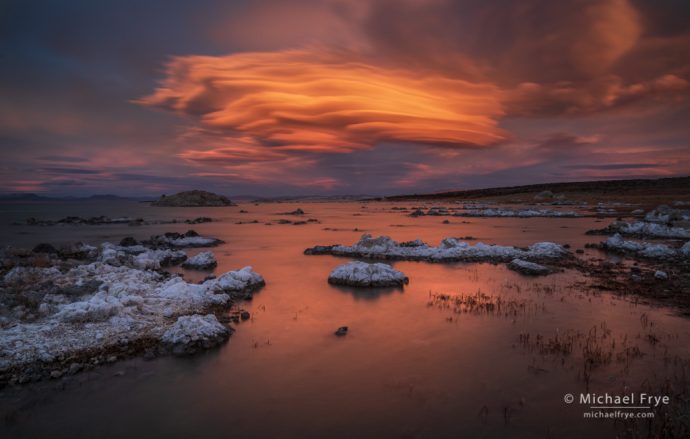 We just finished our workshop in the eastern Sierra, and had a great time. We had to look a little harder for colorful aspens this year, but in the end we found plenty.

The workshop ended on Friday. Yesterday Claudia and I slept in a bit, then did an interview, packed up our classroom space from the workshop, and had an early dinner at the Whoa Nellie Deli in Lee Vining.

By then it was about 4:45 p.m, with sunset at about 6:15. It was windy, with mostly-cloudy skies. Satellite images showed lots of high clouds to the west, and it seemed likely that those high clouds would block the sun and hinder the chances for an interesting sunset. But those high clouds were moving very quickly, so it seemed possible that they might clear out by sunset. And out over Mono Lake I could see lots of beautiful, saucer-shaped, lenticular clouds, which would look spectacular if the sun did break through. It seemed worth waiting an hour or so to find out.

Lenticular clouds are generated by strong winds passing over mountains. The air rushes downward rapidly on the leeward side of the mountains (usually the east side), then bounces up, then down, then up, and so on, in a wave pattern. On the upward bounces the air gets cooled and generates clouds. That’s what happened yesterday. There were no lenticular clouds over the Sierra crest, but on the satellite images I could see standing waves of clouds to the east of the mountains: 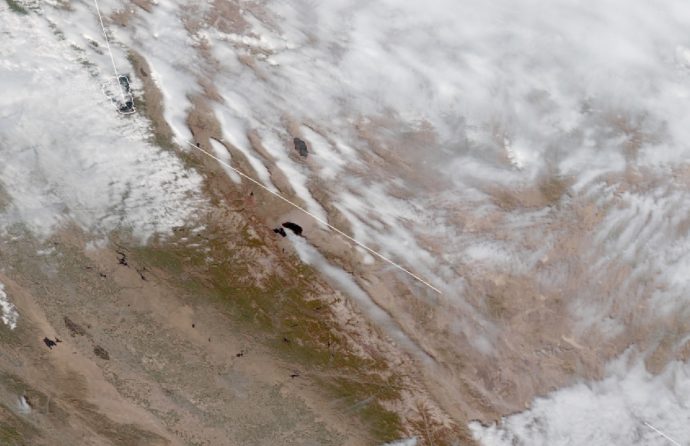 Satellite image from 2:21 p.m. yesterday. Mono Lake is just left of center, Walker Lake just above Mono Lake, and Lake Tahoe in the upper-left corner. You can see a long wave cloud starting at Mono Lake and extending southeast, along with repeating, standing waves between Lake Tahoe and Walker Lake.

I waited at a favorite spot along the western shore of Mono Lake. But as six o’clock approached I could see sunlight off to the left (north), and a particularly beautiful cloud in that direction that looked like it could get some light. I needed a better view to the north, so I moved down to the lakeshore and rushed out to find a spot.

By then the cloud that had looked so interesting a few minutes earlier didn’t look quite so compelling. But a different cloud off to the east, with beautiful, sculpted layers, started to light up. So I scrambled to find a good foreground for that direction, splashing through shallow, muddy, salty water along the shore, eventually finding a spot with a nice arrangement of low, white, salt-encrusted tufa formations.

The wind made the water choppy, so I put on a 7-stop neutral-density filter to slow down the shutter speed and smooth out the water. I was worried about the wind shaking the tripod and blurring the photos, but I magnified the images and they looked sharp. The cloud grew more and more colorful, turning from orange to red and pink, but I liked this earlier image best, when the cloud had more distinct layers.

I’ll post more photos from the eastern Sierra when I get a chance to process them, but I thought I’d start with this – one of the most striking cloud formations I’ve ever seen.