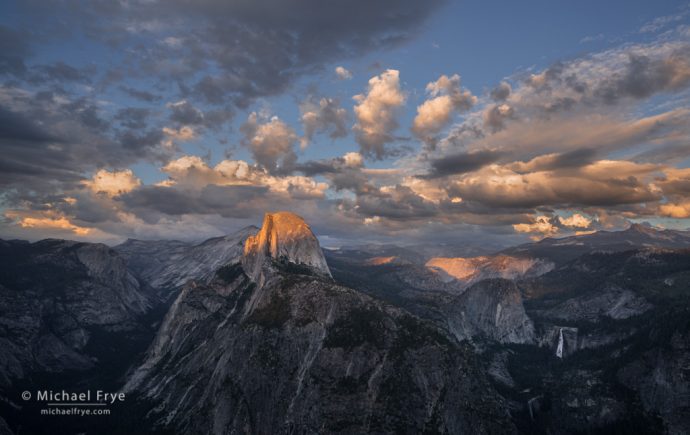 Half Dome and Nevada Fall at sunset from Glacier Point, Yosemite

While summer is the dry season in California, monsoonal moisture often pushes up from Mexico during this season, triggering afternoon thunderstorms in the mountains. But there hasn’t been much of that this year. It’s been one sunny day after another. While the typical late-summer monsoons made their way to Arizona, Utah, New Mexico, and Colorado, they never reached this far west.

Last week, however, some of that monsoonal moisture finally arrived in the Sierra, and on Tuesday, Wednesday, and Thursday, clouds and thunderstorms developed over the high country.

Looking at the forecasts, it appeared that Wednesday was the most promising day, with an 80-percent chance of rain at higher elevations according to some forecasts. But on Wednesday afternoon, as I watched the radar and satellite images, and the Yosemite webcams, the storms seemed to be moving off to the north, and the showers and clouds were dissipating over Yosemite. So I stayed home.

The forecasts for Thursday were less promising; the National Weather Service gave only a 20-percent chance of rain for Tuolumne Meadows. And once again, the showers that did develop seemed to be moving off to the north and northeast. But as I looked at the satellite images that afternoon I saw something unusual. Apparently there was enough moisture in the air for clouds to start forming over the lowlands in the Central Valley. Clouds kept forming and re-forming in the Central Valley, foothills, and high country. That gave me hope that some clouds would linger until sunset, so I packed my gear and drove up to the park.

I waited until reaching Yosemite Valley to decide whether to turn left toward Tenaya Lake and Tuolumne Meadows, or right toward Glacier Point. But when I reached the turnoff the road to Tuolumne Meadows was closed (apparently due to an accident). So Glacier Point it was.

At Glacier Point I watched a continuous parade of clouds march by from south to north, presenting a series of beautiful cloudscapes over Half Dome and Nevada Fall. For most of that time Half Dome remained dark, shaded by clouds to the west, but on a couple of occasions the sun broke through, adding a key focal point to the compositions.

That brief stretch of afternoon thunderstorms ended quickly, and the current forecasts show nothing but sunny weather ahead. The next rain is likely to come from an early-fall storm moving in from the west or northwest – the kind of storm that might bring a spell of steady rain, and maybe higher-elevation snow, rather than scattered thunderstorms. We’ll see! But it was nice to finally be able to point my lenses at some clouds. 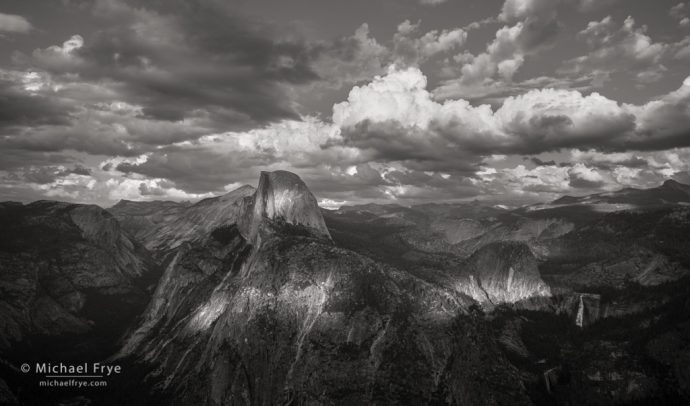