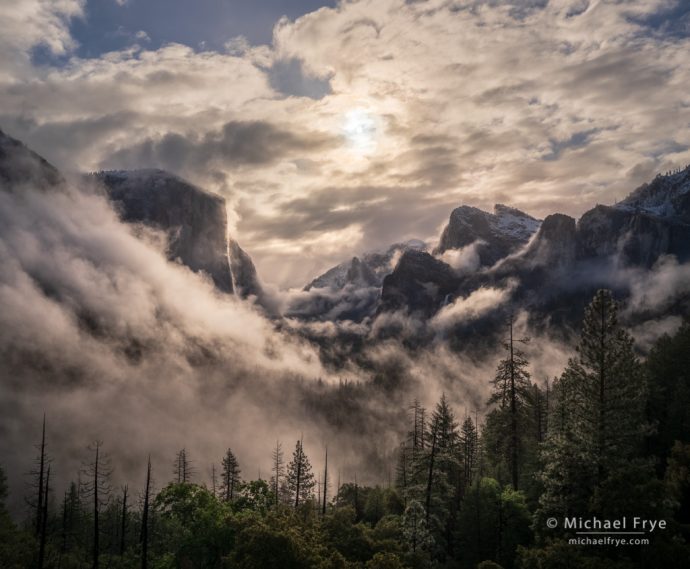 The Ansel Adams Gallery is sponsoring another special print sale of two of my photographs, at 25% off the normal price. The two images we selected for this offer are Swirling Clouds and Mist, Sunrise, and Sunbeams, Mist, Half Dome, and the Merced River. I’ve posted these two photographs on this blog before, of course – in fact Sunbeams, Mist, Half Dome, and the Merced River was selected by you, my readers, as one of my ten best photographs of 2018. But these two images have never been exhibited at a gallery or sold before.

Here are the stories behind the photographs:

I’ve watched many sunrises from Tunnel View, but this is one of the most beautiful I’ve seen.

It didn’t start out with much promise. When my wife Claudia and I arrived in Yosemite Valley we found lots of mist, but overcast skies. Some forecasts hinted that the skies might clear later in the morning, when the sun would be too high. Other forecasts showed little or no clearing all day.

But I thought it was likely that the sun would break through sometime that morning, so I hung around and photographed misty black-and-white scenes while I waited. I knew if the sun did appear early enough that morning it would be right between El Capitan and Cathedral Rocks, which could provide some unusually interested lighting.

By 6:35, about 45 minutes after sunrise, I could see a bright spot in the clouds where the sun was. A few minutes later the sun started to backlight the mist. Then for the next 90 minutes the sun, mist, and clouds put on a spectacular show. One beautiful view followed another, but this is my favorite moment from that morning. 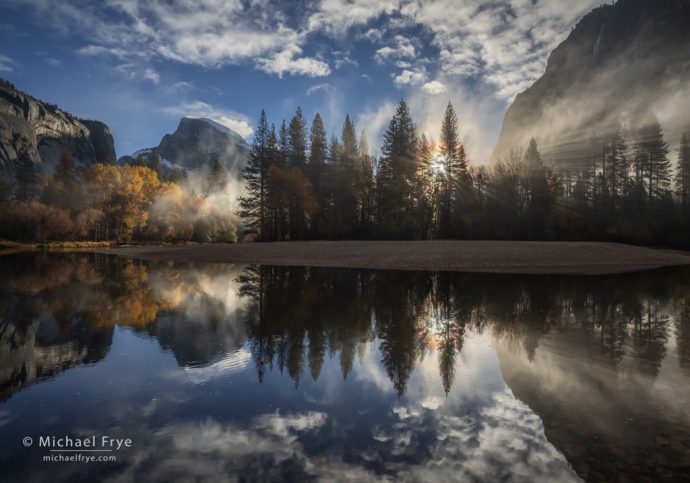 I made this photograph on a late-November morning after an autumn storm. The ground and trees were soaking wet after three inches of rain, so when the sun would hit a spot for the first time it would evaporate that moisture, creating wonderful mist, and a succession of beautiful scenes. It was one of those magical Yosemite days when I wished I could be in twelve places at once.

Lacking the ability to clone myself, I worked my way around Yosemite Valley, trying to arrive in the right places at the right times to catch moments when the sun first reached the valley floor. One of my first stops that morning was at this view of Half Dome with the Merced River in the foreground. I got there just in time to catch the sun breaking through the mist, casting sunbeams and forming a beautiful corona. To top it off, the cottonwoods along the river still had color, and some wonderfully-patterned clouds were passing overhead and reflecting in the water.

There have been many mornings when I’ve risen early to photograph a sunrise, and thought later that perhaps more sleep would have been a better option. But you never know unless you get out there. And every so often I get to photograph a beautiful, special sunrise, like this one, and remember why I keep getting up early and trying – and why I photograph landscapes in the first place.

Click here to purchase one of these prints. And please feel free to ask me questions, either by posting a comment below, or sending me an email. And thanks so much for your support!