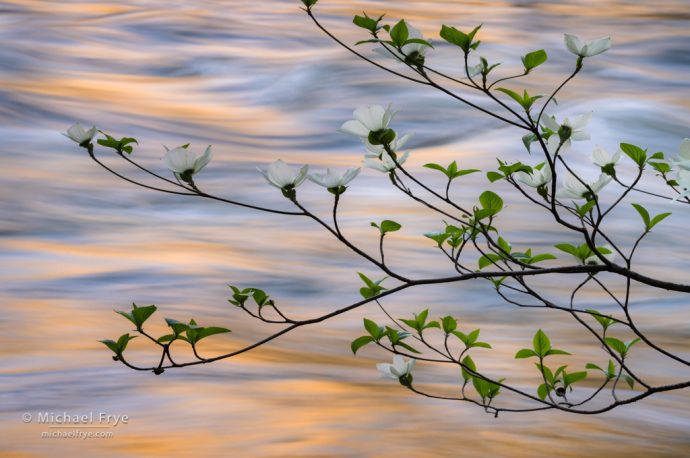 Dogwood and golden reflections, Yosemite. A telephoto lens (116mm) helped simplify the scene by isolating one small section of branches against the water. 1/4 second at f/22, ISO 100.

Claudia and I are up in the redwood country, scouting for our upcoming workshop. I’ll post some photos from this area later, but in the meantime here are a few more dogwood images from Yosemite.

One of the biggest challenges when photographing forest scenes, including dogwoods, is simplifying and organizing all the chaos. Trunks, branches, leaves, and shrubs are scattered about, growing where there’s sunlight and suitable soil. There’s an order to all that, but it’s an organic order that doesn’t translate easily into visual order. To find compositions that make sense, you have to look for ways to simplify these scenes.

Part of the problem is that you often can’t see the forest for the trees. I can’t count how many times I’ve spotted a promising forest composition, only to find that the view I wanted was obstructed by other trees or shrubs in the foreground. That’s why many of my best woodland photographs were made at the edge of a forest, where I can step back away from the trees without other trees getting in the way. You can find these edges along fields, meadows, roads, rivers, or lakes.

Another frequent problem is cluttered backgrounds. I always hope to find fog, because fog obscures the background and helps simplify the scene (and, as a bonus, can add a mystical mood). That’s also why I often try to photograph dogwoods against a river. With a slow shutter speed the water adds a soft, smooth, undistracting background so the dogwood branches and blossoms stand out clearly.

All the photographs shown here were made with telephoto lenses, because a long lens allows me to isolate a small, interesting part of a scene, and exclude potentially-distracting objects along the edges or in the background. Of course it’s possible to make strong, simple forest compositions with a wide-angle lens, but the ability to isolate and simplify with telephoto lenses is often extremely helpful when dealing with so much clutter.

And light always matters. In a forest, splotches of sun and shade create visual confusion, so soft light (shade or overcast) usually works better. Backlight can sometimes work as well. All the images here were taken in the shade. 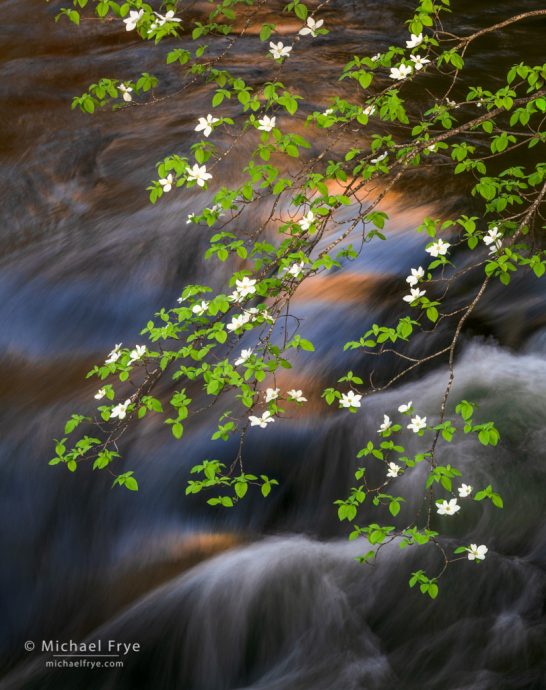 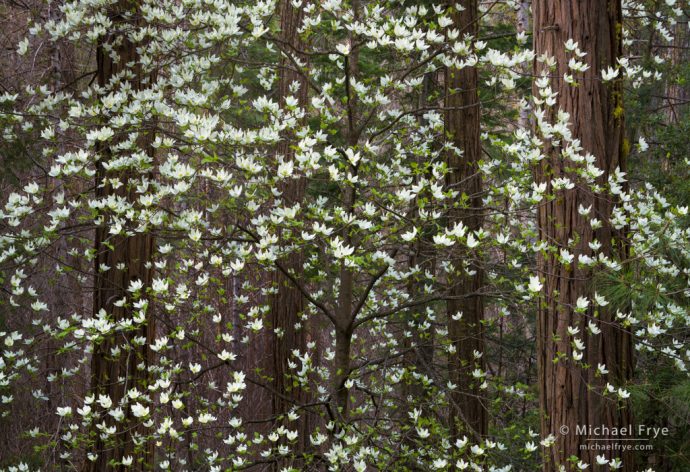 Dogwood and cedars, Yosemite. This dogwood grows along the edge of a road, which allowed me to stand back a bit, on the other side of the road, and photograph this pattern with a telephoto lens (93mm) without intervening branches. The background would be a cluttered mess if you could see it, but the thick mass of blossoms and leaves helps block the clutter. 0.7 seconds at f/16, ISO 100. 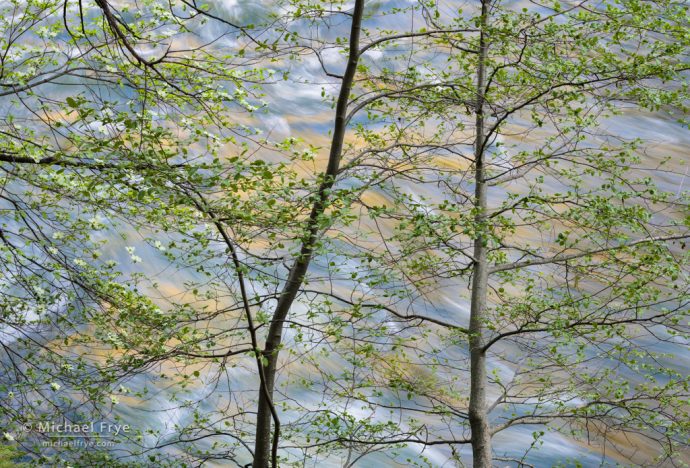 Alders and dogwood above the Merced River, Yosemite. Again, a telephoto lens (89mm) helped isolate an interesting pattern against a watery background. 1/4 second at f/16, ISO 160.