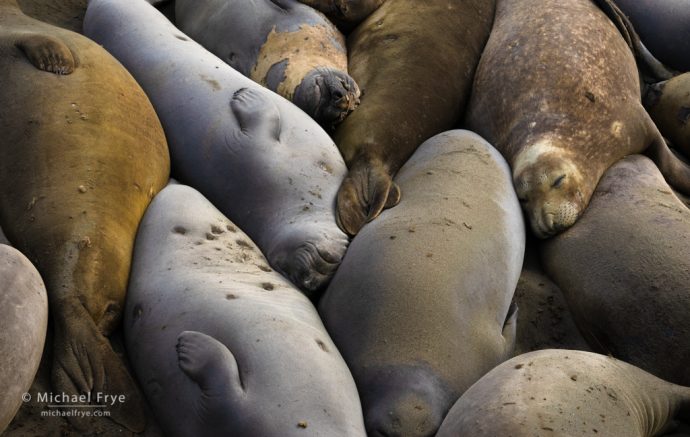 I hope all you moms are having a nice, relaxing day!

Claudia and I found ourselves near San Simeon a few weeks ago, and decided to stop and check out the elephant seals. I became captivated by the patterns made by seals on the beach, so I got out my camera and we ended up staying for over an hour. A thin overcast created soft sidelight and backlight on the seals, which was perfect for highlighting their forms and textures – patterns of seal blubber.

These seals were all females or juveniles. The females give birth in winter, nurse their pups for about a month, then mate. Pregnant again, they head back out to sea to feed. (While searching for prey they can hold their breath for up to 100 minutes, and dive as deep as 5,000 feet below sea level.)

In April and May the females and juveniles return to the beach to molt, spending about a month ashore fasting and shedding their outer layer of hair and skin. That’s what these seals were doing; you can see patches of tan hair and skin peeling away on some of them. Then they head back out to sea to feed, with the females returning to give birth the next winter. The sub-adult males come ashore to molt in May and June, while mature males molt in July and August.

In these photos the seals look like they’re peacefully sleeping, but their rest is constantly interrupted by territorial squabbles. One seal will get in another’s space, and the two then squawk at each other, mouths agape, and sometimes lunge and try to bite each other. Several times we watched one of these 2,000-pound animals flounder across dozens of other seal bodies in an attempt to get to the other side of the pile… for some reason. Claudia’s video below shows some of the commotion.

California is a pretty amazing place. 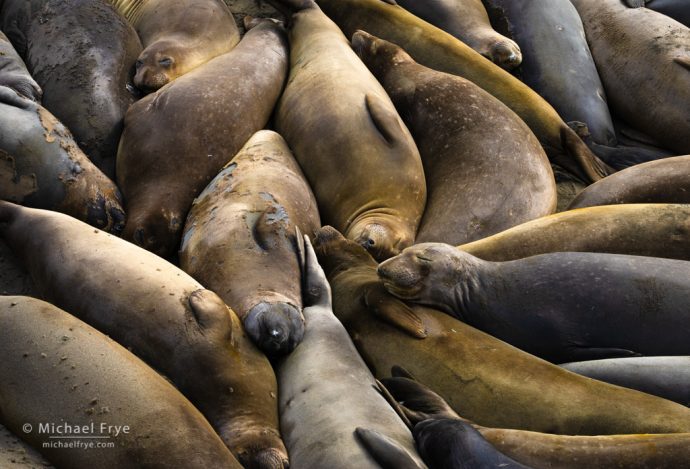