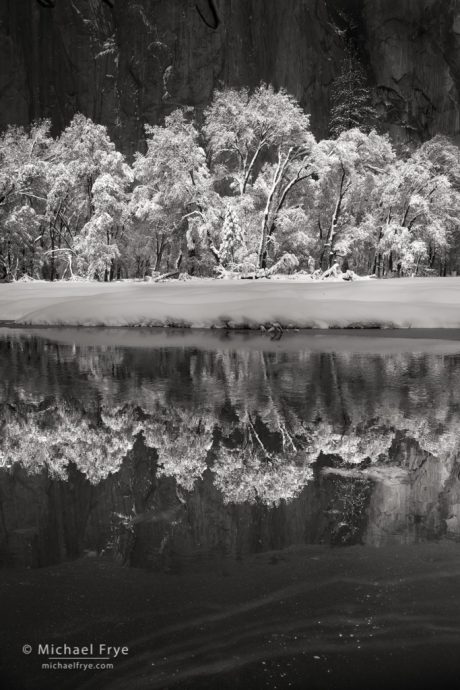 On that snowy day I wrote about in my previous post the sun came out quickly, so our first stop was a spot near El Capitan that was still in the shade. I was looking for reflections, but then the sun hit the oaks across the river, while a cloud threw shade over El Cap, creating a beautiful contrast between the bright white trees and the dark cliff behind them.

The snowbank below the oaks, however, was really bright and distracting. All I need, I thought, is for a cloud to shade that snowbank while the sun was still hitting the trees. And a minute later it happened, setting up a dark-light-dark-light pattern. (That’s the image at the top of this post.)

Sometime later we started walking back to the car, but didn’t get very far. The sun had reached a small patch of trees, and snow started to rain down from the branches. The backlit, falling snow looked striking, so I had to stop.

It was a very challenging situation to photograph. It was hard to even compose the picture since the scene was so contrasty, and I had to keep moving and re-composing to keep the sun partially hidden behind a tree trunk. I’d wait for some snow to fall, fire off a series of frames, and then move again, since the sun would be swinging out from behind the trunk and creating lens flare. So I’d step to the left, recompose, wait for more snow to fall, shoot a series of frames, step left again… and so on.

But I forced myself to make this effort because it was such a beautiful scene. The snow kept falling in unpredictable patterns, and there was no way to know in advance which moment would turn out to be the best. So I tried to capture as many frames as possible, and hope that some of them worked.

I use this same approach whenever I’m photographing repetitive movement, like waves, wind, cascading water, and so on. Even animals repeat their movements sometimes. I’m not just firing the shutter randomly; I’m picking moments that seem promising, then making a series of exposures in order to capture one image that rises above the rest. With cascading water I’ll often take 20 or more frames with the same composition and settings, looking for one image with just the right water motion.

Photographing the snow falling from the trees the other day I made 195 exposures. And I wasn’t bracketing, because bracketing doesn’t work when you’re trying to capture such scenes. First, it’s difficult to blend exposures when things are moving. Second, if the idea is not to blend, but to hedge your bets and make sure you don’t miss the exposure, then the frame that captured the perfect moment is likely to be under- or over-exposed. It’s better to just get the exposure right without bracketing. (And it helps, with a high-contrast scene like this, to use a camera with good dynamic range.)

I had to throw out many of those 195 frames because they had excessive lens flare, or because the falling snow just wasn’t very interesting at that moment. And I missed a lot of good moments while moving and recomposing. But fortunately I managed to capture a few good moments as well. Here are three, just to show the variety of movement. 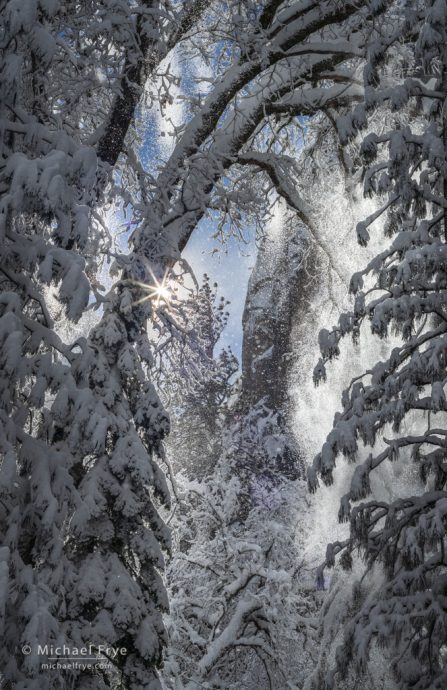 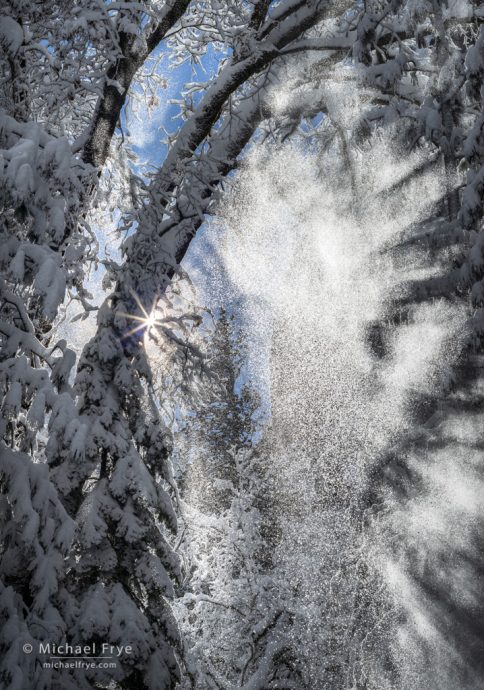 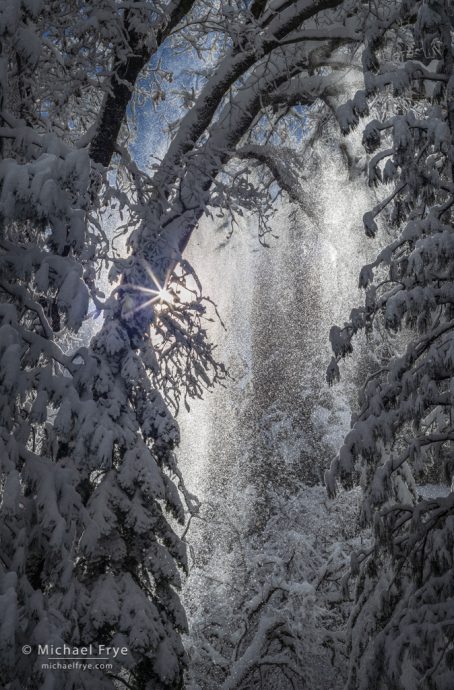 At the bottom of this post you’ll also find a short video Claudia and I made about that snowy day. It’s been really fun seeing the Yosemite Valley with so much snow.