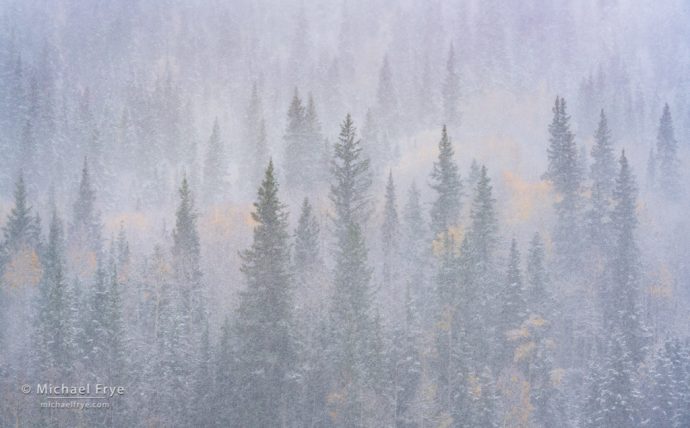 In early October a series of storms brought rain and higher-elevation snow to the mountains of Colorado. Claudia and I spent several long days chasing the weather, and I found many intriguing combinations of weather and color, including aspens with snow, fog, clouds, and sunbeams. But I never found aspens with snow and fog. That’s not too much to ask for, is it?

One morning a series of showers passed through, bringing sun, then snow, then sun again. And then it started snowing again, harder, with the wind driving the flakes sideways. Through the blizzard I saw a hillside with conifers and aspens, and a few yellow leaves still clinging to the trees. Technically there was no fog, but the thickly-falling snow partially obscured the view, softening the scene and creating a painterly, fog-like effect.

I got out my 70-200mm lens, put on the lens hood and a rain cover, and started framing patterns of trees on the hillside. I varied my shutter speeds, but looking through the images later I liked the ones with fast shutter speeds best, where the snowflakes were frozen into tiny white specks, rather than becoming streaks. (The photograph above was taken at 1/125th of a second.)

The snow stopped as suddenly as it began. But this brief autumn blizzard created a beautiful combination of elements while it lasted – snow, color, patterns, a splash of color, and a hint of fog.