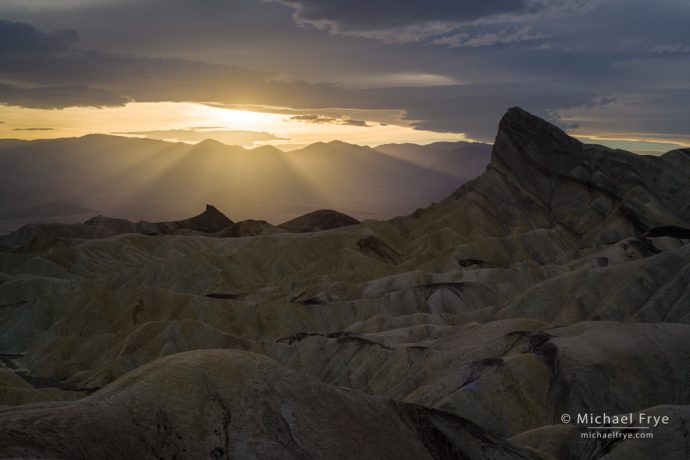 We just returned from another workshop in Death Valley. The wind and weather in Death Valley always present challenges, requiring flexibility to adapt to the changing conditions. But this time, just to make things more interesting, Stovepipe Wells lost power during our stay. With high temperatures around 100 we definitely felt the lack of air conditioning. And simple tasks like charging camera batteries became difficult. But California Edison trucked in two generators, so luckily the most serious problems only lasted about 12 hours.

The power outage aside, we actually had very good photo conditions. Some wind just before the workshop cleansed the sand of footprints, and we had clear skies for our first two nights in the dunes. Then some clouds moved in, followed by a big sandstorm on our last night. Typical Death Valley stuff.

I made the photograph above on the third evening of the workshop from below Zabriskie Point. There were a lot of clouds that evening, but a gap in those clouds down near the western horizon gave us hope that the sun could break through and create an interesting sunset. For a brief moment, just before the sun lowered into that gap, we saw some beautiful sunbeams fanning out from underneath the cloud bank. The contrast was extreme, so I bracketed five exposures, each two stops apart, and blended those images with Lightroom’s HDR Merge.

I’ve included another photograph below made before the workshop under similar lighting conditions. We didn’t see any sunbeams that evening, but I was able to capture a sunburst, with light on the mud cracks in the foreground. Again I bracketed five exposures, two stops apart, and blended them with Lightroom’s HDR Merge.

I made many more photographs before and during the workshop, including several from our two beautiful nights in the dunes. I’ll post more images soon. 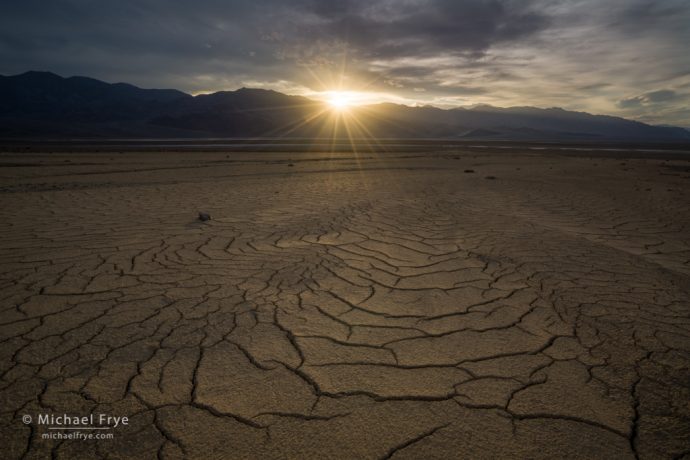