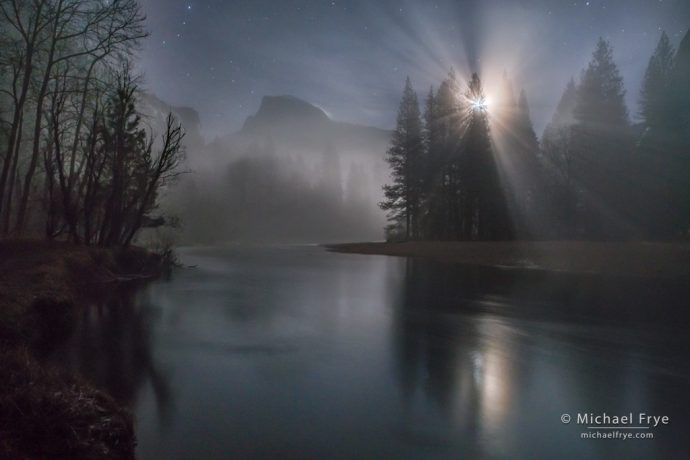 We haven’t had much rain or snow this winter, but on Monday and Tuesday we finally got a decent storm. Though the storm wasn’t as big as initially predicted, Yosemite Valley got a good soaking, with an inch and a half of rain. No snow though, as it was very warm. (This same storm dumped much more rain on southern California, creating devastating mudslides. This state has endured a lot lately.)

On the few occasions when we’ve had precipitation this winter, I always seemed to have some commitment that prevented me from getting out to photograph. But this time I didn’t have any pressing deadlines, so I kept a close eye on the weather, hoping to get up to the valley to photograph the storm clearing.

Although the rain slowed down on Tuesday, the sunset didn’t look promising, as the satellite and radar images kept showing scattered showers and lots of cloud cover all afternoon. So it looked like the storm would clear during the night. That meant either heading up to the valley early the next morning, when there would be a good chance of finding some lingering mist, or driving up to the valley in the dark to photograph the storm clearing at night. The moon would be 35% full, and due to rise at 1:33 a.m. That seemed like good timing, and 35% full was just about right: bright enough to have a clear effect, but dim enough to reveal lots of stars in the sky.

I packed my camera gear, some snacks, warm clothes, and a sleeping bag (for napping in the car), and arrived in the valley around 11:30 p.m. Just after I arrived it started raining again. Time for a nap.

I woke about 1:00 a.m. It had stopped raining, and some stars were visible. I headed to Tunnel View, as I thought that might be a good to see the moonight starting to illuminate the clouds. The moonlight, however, seemed to be blocked by clouds further east. But the skies kept clearing, and I was able to photograph stars over the misty valley: 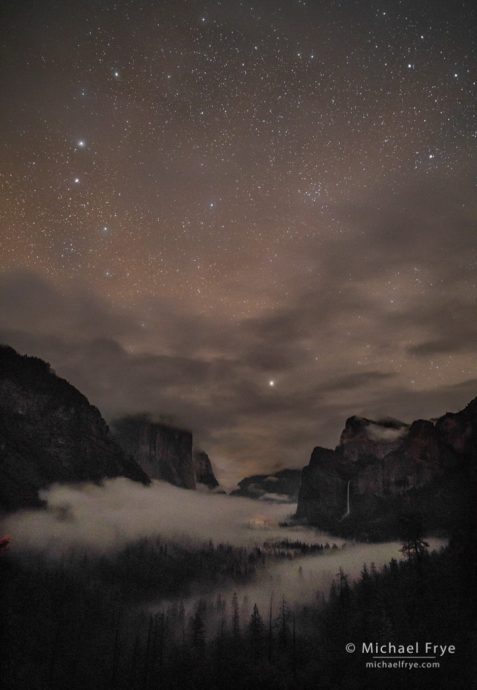 As the skies cleared, the mist increased, rising up to fill most of the valley, and obscuring the valley floor. I decided to drive down to a favorite location along the Merced River, where I caught the Three Brothers wrapped in mist, with stars above, before the fog closed in again: 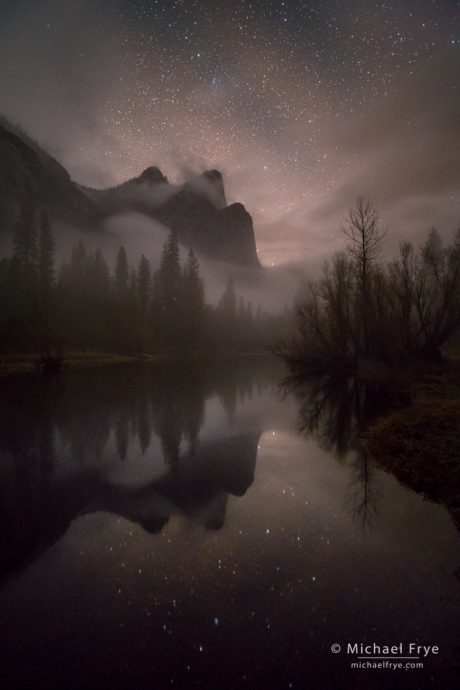 Time to move once more. In Cook’s Meadow I finally saw the moon itself, rising through the mist between Half Dome and Glacier Point. I decided to head to a spot along the river with a view of Half Dome, where I might be able to hide the moon behind a tree to prevent flare. With some luck I might even see some moonbeams.

But when I arrived at the spot the fog was thick, and I couldn’t see Half Dome or Glacier Point. I took some photos of misty trees backlit by the moon, and waited. It seemed unlikely that Half Dome would appear, but there was always a chance. In the meantime I dialed in the exposure for the moon.

And then I saw something. Is that part of Half Dome? It seemed to be. I changed my camera position to put the constantly-moving moon behind a tree, adjusted my composition, and sure enough, Half Dome started to emerge from the mist. And I could clearly see beams radiating out from behind the tree. I took one horizontal frame, then flipped the camera sideways and captured several panorama sequences. But in the end I liked the composition and moonbeams best in that first frame (shown at the top of the post).

Needless to say, I didn’t get much sleep Tuesday night, but I had a great time. I’m glad we finally got some rain, and I had a chance to photograph a clearing storm – the first one this winter!

P.S. For the Tunnel View photograph I used my typical settings for the stars and Milky Way (20 seconds at f/2.5, 6400 ISO). For the Three Brothers image I lengthened the exposure to 30 seconds and opened up the aperture to f/1.8 to get more detail in the foreground and reflection.

For the photograph of Half Dome at the top of the post, I gauged the exposure by using the blinkies (highlight alert). For a daytime image with the sun behind a tree I want to see some small blinkies in and around the sun, but not see the whole sky blinking at me. In that situation, with the sun in the frame, seeing no blinkies means the photograph is too dark, while seeing lots of blinkies means the image is overexposed.

I did the exact same thing with the moon behind a tree: found an exposure with small blinkies in and around the moon, but no more than that. I wasn’t trying to get detail in the moon itself, as that would make everything else way too dark. But I did want to preserve detail in the moonbeams, and the corona around the moon. The settings turned out to be 15 seconds at f/4, 1600 ISO.

With almost any landscape photograph, the most important exposure consideration is getting the highlights right, which I did. But in hindsight I probably should have made a lighter exposure to blend with this one, as I had to brighten the shadows considerably, which brought out a lot of noise. But I was in a hurry to try and capture a wider panorama, so I just made the one exposure, and luckily was able to eliminate most of the noise in software.