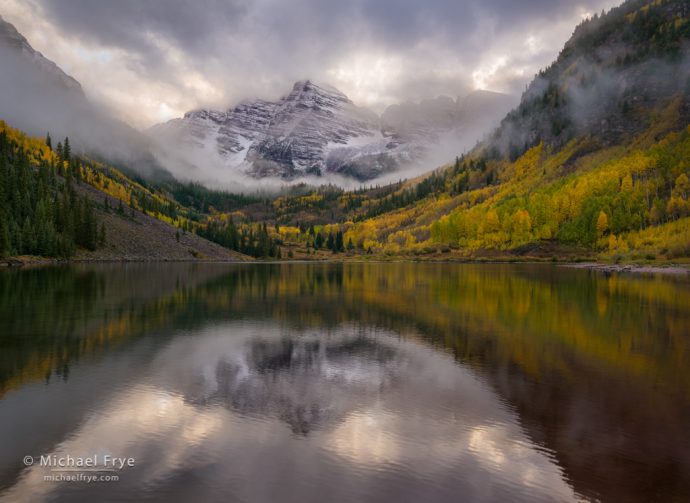 Some photographers love photographing icons, and try to visit as many as possible. Others avoid them at all costs.

But I think most of us have mixed feelings about them. These iconic spots have a certain undeniable appeal. There are good reasons, after all, why these places have become iconic: they’re great locations. With the right conditions, it’s possible to capture some beautiful images at these spots. They work.

And it’s natural to feel a certain curiosity about these places. Can you visit Yosemite for the first time and not go to Tunnel View? Or travel to Death Valley and avoid Zabriskie Point? After seeing so many images of these locations, most photographers would at least like to see them in person – as long as they’re in the neighborhood.

On the other hand, it’s difficult to do something creative and apply your own artistic vision at these iconic locations, yet still make an image that carries a sense of the place. At best, with some luck and good conditions, you might capture something that’s similar to, and maybe as good as, some of those previous images.

On our recent trip to Colorado, our pursuit of fall color and interesting weather led us to the Aspen area, home to the most iconic photo spot in the state – the Maroon Bells. I had visited the Maroon Bells once before, about 20 years ago, in summer, but I don’t think I made a single photo that day. Now, however, we were in the neighborhood in autumn, when the aspens would be turning color underneath the mountains, and there was also fresh snow on the peaks – both essential conditions for a classic image of the Maroon Bells.

Claudia asked me whether I wanted to photograph them, and I didn’t know how to answer. I felt a great deal of ambivalence. Did I want to deal with the crowds of other photographers I knew would be there? How early would I have to go to get a decent spot – just to capture a photograph similar to thousands that have been made before, and virtually identical to those taken by the photographers who would be standing next to me?

On the other hand, the weather forecasts hinted at a clearing storm Sunday morning. With aspens turning, fresh snow on the peaks, and a clearing storm at sunrise – when would I have a better opportunity to photograph that spot?

In the end, the lure of the Bells proved too strong, and I decided to try it. Since I hadn’t been there in 20 years, we elected to go up on Saturday afternoon (September 30th) to scout. Maybe I could, after all, find a different perspective. If not, then I would at least know where to go the next morning.

One thing that complicates photographing the Maroon Bells is that you’re not allowed to drive your car up to Maroon Lake between 8 a.m. and 5 p.m. Between those hours you have to take a shuttle bus from Aspen, which we wanted to avoid. So at 4:45 p.m. we lined up at the gate and waited to get in, along with some 40 other cars. It was raining, as it had been off and on all day, but that didn’t seem to deter people.

On the drive up to the lake the rain almost stopped, and we caught a glimpse of the Bells just before we got to the parking area. By the time we got to the shore of the lake the mountains had disappeared behind clouds, but soon bits and pieces of them started to poke through. Gradually more and more of the Bells emerged, their ledges etched with fresh snow, surrounded by mist, with yellow aspens below, all reflected in the calm lake surface. It was a stunning scene, and photographically irresistible. I pushed thoughts of scouting to the back of my brain as I concentrated on photographing what was in front of me.

Over the next hour and a half the mist shifted, sometimes hiding the peaks, but they always reappeared after a short wait. One time the wind picked up, ruffling the reflections, but it soon died down again. At one point a woman let her dog wade into the lake (legally, on a leash), causing ripples, until a photographer politely asked if she could take her dog out of the water. (Okay, that photographer was me.)

During all this I tried different compositions: vertical, horizontal, wider, tighter. I even walked up the little rise next to the lake to try a different vantage point. And I photographed the jagged peaks to the north, and the misty ridges left and right of the Bells. But I kept coming back to the lakeshore and the Maroon Bells, and to a wide, horizontal composition that included the aspens on the hillside to the right of the Bells. Many, many photographers have made similar compositions from this spot, and now I knew why.

During this time there were at least 100 people around the lakeshore. Surprisingly, only a few had tripods. Others took smartphone pictures, or selfies, or walked around and enjoyed the view. There were lots of dogs, and kids playing. It was hardly a wilderness experience, but people were having a good time, enjoying a beautiful, natural spectacle.

We “serious” photographers along the lakeshore kept waiting for the sun to break through and create some color in the clouds. (You’re looking west toward the Bells from this spot, so in the afternoon the scene is backlit – if there’s sunlight.) We saw a few patches of blue sky, and occasional hints of light and color, but that was about it.

Nevertheless, the mist was beautiful, and the aspens added enough color. My favorite moment is shown in the photograph above, with just a hint of color in the sky.

Claudia and I still wanted to come back the next morning. Sunrise would be around seven o’clock, and we debated how early I would need to be there to get a good spot. Six? Five? We decided that we needed be at Maroon Lake by 5:30 at the latest.

It was raining when we arrived at the parking area the next morning at 5:20, but we found at least 20 cars there already. Damn. I grabbed my camera equipment and rain gear and hurried out to the lakeshore. And I found… nobody. I was the first one there. Apparently everyone else was sitting in their cars waiting for the rain to stop.

It was pitch dark. I found my chosen spot only because I recognized a small rock I had set my camera bag on the previous evening. Soon other photographers started arriving, with headlamps shining all over the place. It quickly became apparent that most of them had never been there before. Several people asked me where the mountain was. I pointed in the general direction of the Maroon Bells, which I could barely make out in the dark if I shielded my eyes from the headlamps.

Before first light most of the lakeshore was lined with photographers. By sunrise there were about 200 people at the lake; maybe half had tripods. Unfortunately there was no mist, and wind ruffled the lake surface, killing reflections. We saw colorful clouds behind us at sunrise, and a few times some faint spots of sunlight broke through to the right of the Bells, but that was it.

I liked the conditions better the previous evening, yet, strangely, I still enjoyed my time there Sunday morning. It’s hard to explain, but there was something special about standing around in the dark with a bunch of other photographers, all waiting and hoping for a good sunrise. Everyone was considerate of each other. The man next to me had his family with him, and his wife and son hung out while he stood beside his tripod waiting for the sun to break through. Many other family groups waited along the lakeshore, and people brought their dogs too. It was like being at an outdoor concert, waiting for the performance to begin – only the performance was orchestrated by the sun, clouds, and wind. It wasn’t a spectacular performance that morning, but that’s the way it goes. People seemed to have a good time anyway.

My image from Saturday evening isn’t better or different than thousands of others made from that same spot, but it has a nice mood, and I’m happy with it. Above all, seeing the Maroon Bells wrapped in mist, with fresh snow and yellow aspens underneath, was special. The scene was more beautiful than any photograph can convey, and I’m glad I got to see it in person. 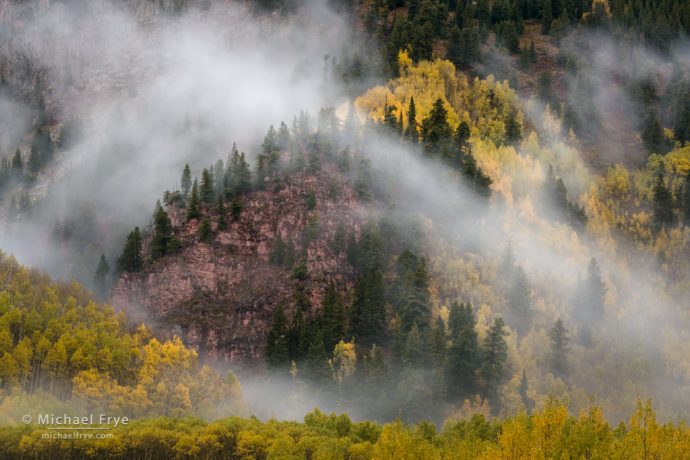 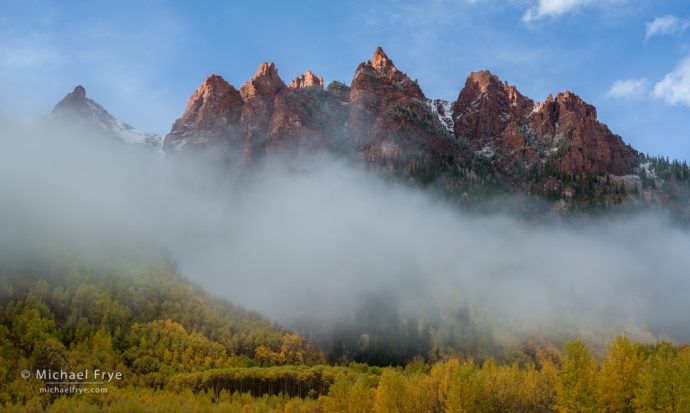