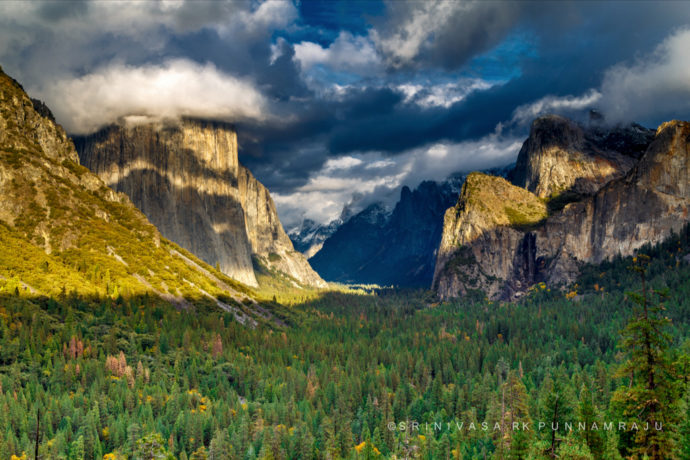 The Photo Critique Series is not dead! It just took a long vacation. 🙂 This time we’ll look at a photograph by Srinivasa Punnamraju from Tunnel View in Yosemite.

Srinivasa was lucky to catch some dramatic weather at Yosemite’s most iconic location, Tunnel View. There were plenty of interesting clouds overhead, and some nice mottled patterns of light and dark on the cliffs – especially the striped bands on El Capitan to the left.

It would have been great to have some sunlight hitting Bridalveil Fall also (even though there wasn’t much water in it), and maybe even some spots of light on the valley floor in the foreground. But this photo was taken late on a November afternoon, and by that time of day at that time of year the light had already left Bridalveil and the foreground. In other words, even on a sunny, cloudless day those areas would have already been in the shade.

But most photographers would be very happy to find these conditions at Tunnel View. It’s a dramatic vista, and with the help of those clouds this photograph conveys some of that drama – which is not an easy thing to do.

This is basically the classic composition from Tunnel View, with El Capitan on the left and Cathedral Rocks on the right. So there’s nothing new or surprising about this framing, but similar compositions have worked for many photographers at many moments from this spot, and it worked here – for the most part. I have two quibbles with the framing: the tree in the lower-right, and the expanse of not-very-interesting trees occupying the bottom third of the photograph.

First, that tree in the lower-right stands out because there are no other prominent trees in the foreground, but it’s right near the edge. I’d prefer to have it in or out – either get it out of the frame entirely, or bring it into the frame more so it becomes part of the composition rather than a distraction along the edge.

With the camera position chosen for this photograph, cropping off the entire tree creates another problem, because it also brings the bright triangle of light on Middle Cathedral Rock right to the edge of the frame, like this: 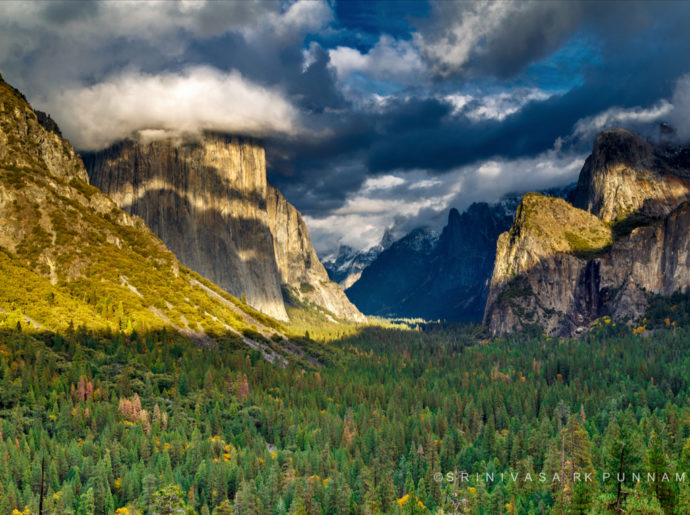 I’d prefer to have a little breathing room between that bright spot and the right edge. You can do that here by cropping off most of the tree, but not all of it, leaving only some not-very-noticeable branches: 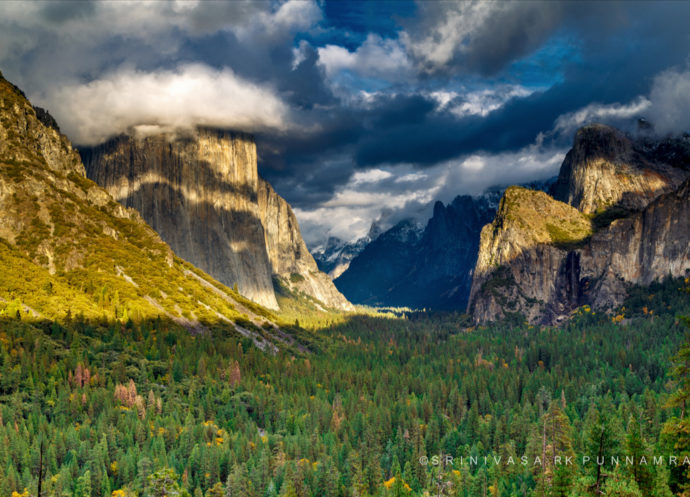 There’s a sweet spot where you can crop off most of the tree, but not all of it, and leave a little breathing room between the triangle of light on the rocks and the right edge of the frame

But an even better option would have been picking up the camera and moving to the left, which would have created more space between the tree and the bright spot of light on Cathedral Rocks.

The other possibility I mentioned – bringing the tree into the frame – would have required either zooming out more, or moving the camera position to the right. I know it’s often crowded at Tunnel View, making it difficult to move around. But if you’ve ever seen me photographing from this spot on a not-so-crowded day you would have noticed that I don’t stay glued to one spot. I move left and right, my position depending on the light and clouds, all in an attempt to deal with that tree. If the light dictates using a wide-angle lens I’ll move right to bring the tree into the frame and incorporate it into the composition, because with a wide lens it’s difficult to keep it out. If I’m using a longer lens I’ll often move left and try to push that tree out the frame entirely.

That tree has vexed many photographers at Tunnel View, but I have a soft spot in my heart for it because it’s in Ansel Adams’s Clearing Winter Storm, a wonderful, famous photograph that was made some 80 years ago. And I’ve included that tree to good effect in some of my own images.

Aside from that one prominent tree, a bigger issue with this composition, in my mind, is the expanse of trees occupying the bottom part of the frame. If you were to ask “What’s the least interesting part of this photograph?” I bet most people would say the bottom third. The middle and top thirds of this image have a lot of interest – dappled light, swirling clouds, and so on. The bottom third is not nearly as interesting by comparison, and any space devoted to less-compelling stuff like that dilutes the impact of the more-compelling stuff.

There’s an easy solution: just crop something off the bottom. Here I’ve also cropped a little extra space off the left side as well, which helps bring the composition into better balance: 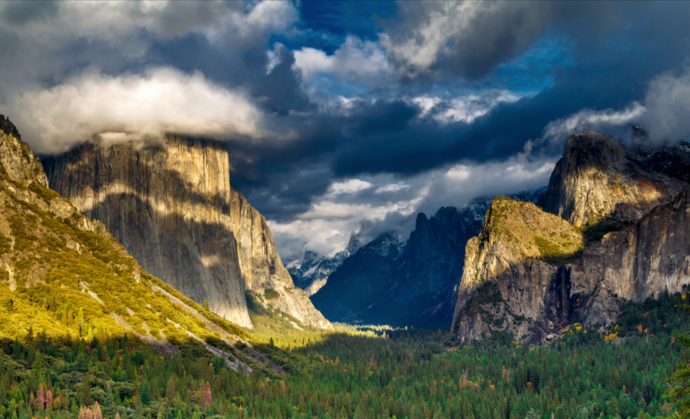 Here’s I’ve cropped most of the expanse of trees on the bottom, plus a little off the left side. To me this is the best crop for this photograph, though I’d prefer to see even more clouds above.

While I think this crop is an improvement, it might have been better still to point the camera up more to begin with. In other words: fewer trees, more sky. While the trees aren’t that interesting, the sky sure is, and I’d like to see more of it. A vertical composition might have even worked if the clouds extended high overhead.

Srinivasa sent me the original Raw file for this image, and it looks perfectly exposed, with no pixels touching either edge of the histogram (at the default settings in Lightroom). The photograph looks fairly sharp, but it was taken at f/22, which caused some diffraction and softening of the image. There’s not enough depth here to require f/22, so the image could have been sharper with a more moderate aperture like f/8 or f/11.

There’s some dramatic light in this scene, and Srinivasa tried to bring this out by increasing the contrast and saturation. Maybe too much? It’s sometimes tempting to use digital-darkroom tools to make a scene look the way we wanted it to be, rather than the way it actually was. And in doing so it’s easy take the photograph to a point where it doesn’t look natural, making viewers think about the process behind making the photograph rather than its content. When people wonder whether it really looked like that, or whether the colors are real, they’re not thinking about the beauty of the scene or the unique moment captured.

Srinivasa also used the Graduated Filter tool in Lightroom to lighten the foreground trees. I understand not wanting to have a big dark area occupying the bottom third of the photograph, but think cropping off part of that area is a better solution. Lightening the trees only draws attention to a not-so-interesting part of the image.

Since Srinivasa was kind enough to send me the original Raw file for this image I re-processed it with a bit more natural color and contrast, cropping as I did above. I also added a bit of dodging and burning to darken the sky and the sunlit triangle to the left of El Cap, and lighten Bridalveil Fall slightly: 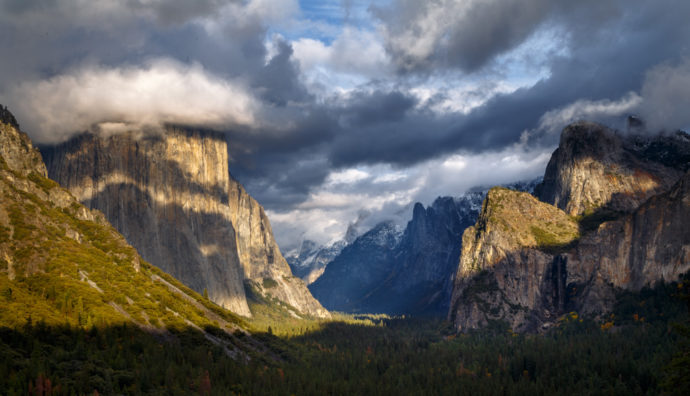 Reprocessed in Lightroom from the original Raw file with less contrast and saturation, and cropped as in the previous version above

But what about black and white? While there are some nice warm-cool color contrasts in this image, to me this photograph is more about patterns of light and dark than about color. Here’s a black-and-white version for comparison: 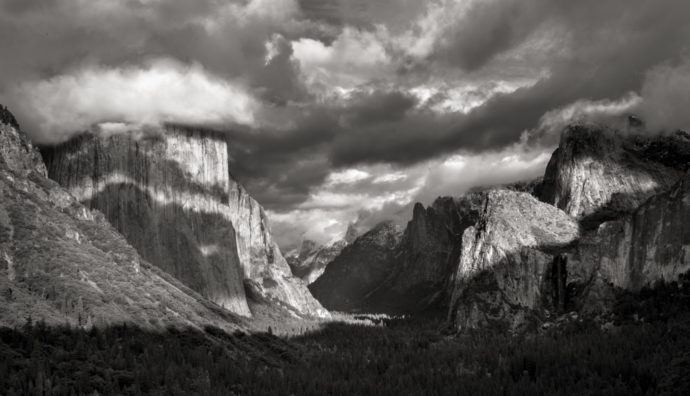 The image converted to black and white – my favorite version

I don’t know about you, but I like this image in black and white. To me it conveys the drama of this scene better. Color might be just a distraction in this photograph.

This image is technically well-executed, and Srinivasa succeeded in capturing the dramatic mood of this scene. The composition is good overall, but I think it could have been improved by pointing the camera up a bit to include more sky and less foreground, and by finding a way to remove the prominent tree in the lower-right corner, or incorporate that tree into the composition better. I also think that re-processing the image would help, with a black-and-white interpretation being perhaps the best way of conveying the drama of this scene.

I’d love to hear your thoughts about this photograph. Do you like the mood? Do you think the composition works overall? What do you think of the way I cropped it? And how do you feel about the black-and-white version?

Thank you Srinivasa for sharing your photograph! You can see more of his work on his website and on Flickr.

P.S. As part of being chosen for this critique Srinivasa will receive a $25 gift card to Metal&Paper which he can use to create a beautiful, custom, fine-art print. If you’d like your images considered for future critiques, just upload them to the Flickr group I created for this purpose. If you’re not a Flickr member yet, joining is free and easy. You’ll have to read and accept the rules for the group before adding images. Please, no more than five photos per person per week, and make sure your Flickr profile has an email address where I can contact you. Thanks for participating!