The Mist Trail at Night 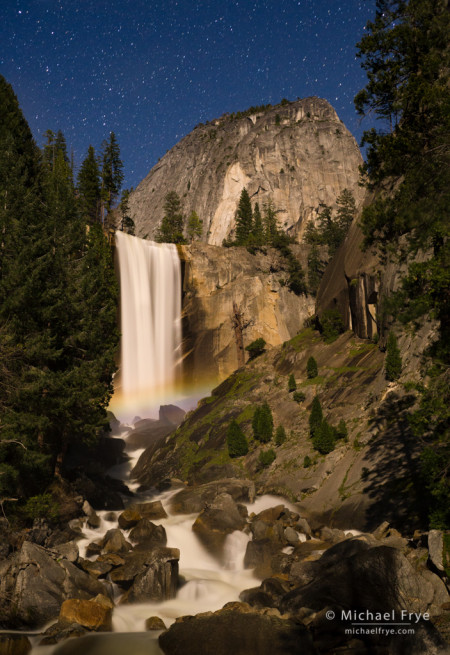 Vernal Fall and Liberty Cap at night with a lunar rainbow, Yosemite. 20 seconds at f/4, ISO 6400

Claudia and I made a nighttime trip up the Mist Trail recently. The ostensible purpose of this hike was to look for lunar rainbows, and we did find some, as you can see from the photos. But that was just a bonus. The real reward was being up there on a beautiful, moonlit night, with the roar of the falling water filling our ears, and having this normally-crowded trail completely to ourselves. It was so much fun.

The moon will be full on Thursday night, and with the good water flow this spring I expect that many photographers will be making their way to Yosemite to photograph lunar rainbows on Yosemite Falls. Don Olson has posted lunar rainbow predictions for Lower Yosemite Fall, but the spray will be soaking the bridge below the lower fall, making it hard to keep lenses dry during long exposures. Unfortunately Don hasn’t posted any predictions yet for Upper Yosemite Fall, and my trigonometry skills aren’t good enough to make those predictions myself. I think lunar rainbows will be visible on the upper fall from Cook’s Meadow at some point on Thursday evening, and the following couple of nights, but I can’t be positive!

While Yosemite Falls has become a well-known for lunar rainbows, you should be able to see lunar rainbows on almost any waterfall that gets lit by the moon and is big enough to generate spray. The only reason lunar rainbows aren’t seen very often is because people don’t usually view waterfalls at night, and don’t know what to look for. 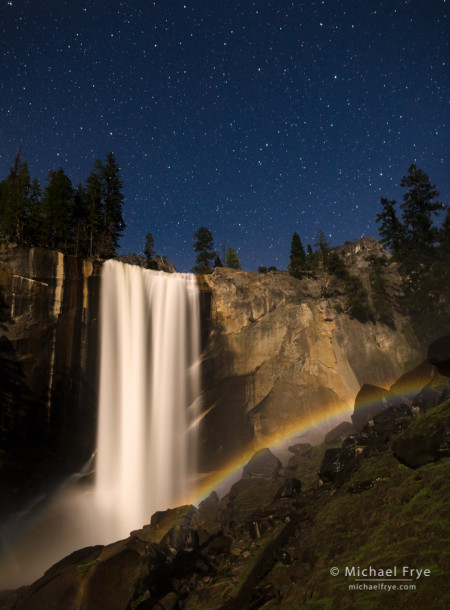 To see a rainbow, the light source (sun or moon) has to be at your back when looking at rain or a source of spray. A rainbow forms a circle around a point opposite the light source. That circle is 42 degrees out from the anti-solar or anti-lunar point. So to find a rainbow on a waterfall you have to stand in a spot where that 42-degree circle intersects the waterfall’s spray, which is usually above and to the side of the anti-solar or anti-lunar point. Figuring out precisely when and where this will happen is actually quite complicated, but if you stand close to some spray with the sun or moon at your back you have a good chance of seeing a rainbow. Of course you can’t see color at night, so a rainbow will look like a white arc. The arc will be distinct and unmistakeable if there’s a lot of spray and the moon is bright. Film and digital sensors can record the color, so if you have any doubt about whether you’re looking at a rainbow or not you can always take a picture. (You’ll find tips on photographing lunar rainbows here.)

So you don’t have to come to Yosemite to see or photograph a lunar rainbow. There must be thousands of waterfalls where lunar rainbows can be seen. When I Googled “lunar rainbow” most of the images that popped up were from Victoria Falls. Viewing lunar rainbows must be a thing there, like in Yosemite.

And for that matter, you don’t even need a waterfall. Any source of spray will do. I photographed a lunar rainbow on Castle Geyser in Yellowstone many years ago. I’ve seen photos of lunar rainbows from actual falling rain. That would be fun to see! I bet you could set up a water sprinkler on a moonlight night and see a lunar rainbow in your backyard.

Comments of any kind are always welcome, but I’d be especially curious to hear from readers who have seen or photographed lunar rainbows in other places besides Yosemite. Let me know! 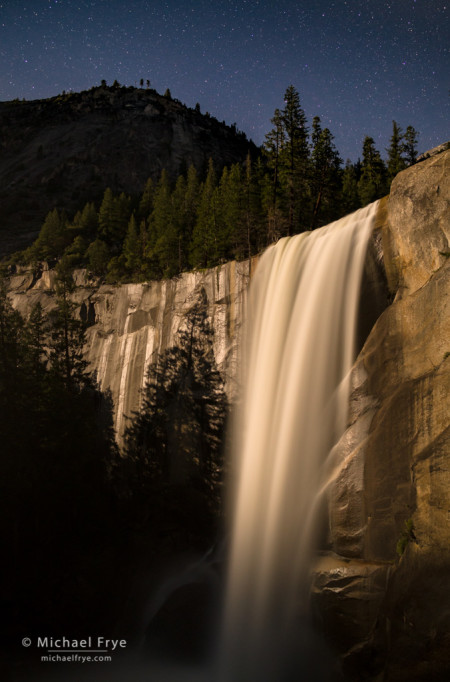