A Stormy Afternoon, and a Fall Color Report 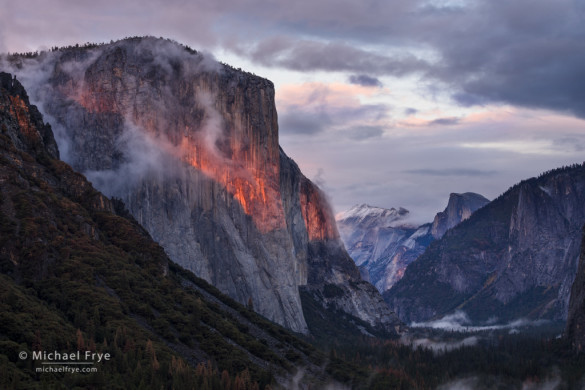 Some interesting weather passed through the Sierra Nevada yesterday. It so happened that I had an errand to run in Yosemite Valley, which gave me an excuse (as if I needed one) to go up there and check on the weather. After taking care of the errand, Claudia and I ended up at Tunnel View, where we waited out a thunderstorm. I tried to take a nap in the car, but was rudely awakened several times by loud claps of thunder. After the rain stopped I went out to the viewpoint and waited for the sun to break through, joined by a number of other photographers, including some friends and acquaintances. Tunnel View is, by virtue of its popularity, the social gathering place for photographers in Yosemite.

Finally, just before sunset, the sun did break through and light El Capitan (see the photograph above). It’s funny how all those photographers can suddenly become quiet as they concentrate on composition and camera settings.

The light faded, but we hung around talking with friends for another 30 minutes, so it was pretty dark when Claudia and I started driving home. But then it occurred to me that the moon should be rising soon. I checked my PhotoPills app, and sure enough, the moon was due to rise at about 7:30 p.m. We stopped at Gates of the Valley and saw clouds and mist still lingering, which could make the moonrise interesting. I decided to wait. Although the clouds were dissipating, enough of them hung around to create a colorful moonrise. Here’s one of the photographs I made as the moon rose and lit the clouds overhead:

Clouds lit by the rising moon, Gates of the Valley, about 7:37 p.m. last night

Our trip to the Valley also gave me a chance to check on the fall color. The good news is that the big-leaf maples have progressed quite a bit since my visit last Thursday, and there’s a lot more yellow around the valley. The bad news is that many of the maple leaves that were green last week have turned brown instead of yellow. I had assumed that those seemingly-healthy green leaves I saw last week would turn yellow, and many of them have, but a substantial percentage – maybe 30 to 40 percent – have turned brown instead. Many maples are still green, but most of those that have turned contain a mix of yellow and brown leaves. In distant views this looks fine, but even a moderately closeup photograph will reveal those brown leaves.

As I wrote in my last post, the cottonwoods are all bare. The oaks are also showing a lot of brown leaves. As with the maples, oak leaves that were green last week have turned brown instead of gold; unlike the maples, with the oaks this is almost universal. There are some colorful oak leaves in the valley, but they’re hard to find.

The dogwoods are still mostly green, with a sprinkling of red and yellow leaves on some trees. So far, the dogwoods look healthy, so they may still put on a good autumn display, but if so it won’t be for at least another week. And it’s possible that the dogwoods may also turn brown, as so many of the other valley trees have.

It’s hard to avoid the conclusion that the drought has led to this poor autumn display. Nature is resilient, but after four years of below-average precipitation, with little snowpack, all of the trees are stressed. Here in California we’ve heard so many news reports about the monster El Nino brewing in the Pacific that many people assume the drought is all but over. But long-term weather forecasts are quite unreliable. I’m hopeful, but not counting on anything until we see substantial rain and snow actually fall from the sky.