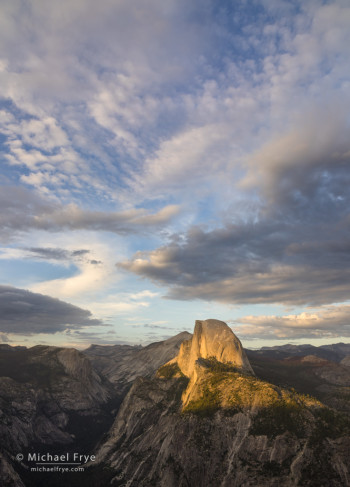 Half Dome from Glacier Point, late afternoon, Yosemite; for a brief moment the clouds formed a zigzag pattern above Half Dome.

Last week I mentioned that the weather forecast called for monsoonal moisture to move up into the Sierra Nevada from the south, with possible showers and thunderstorms. And sure enough, things unfolded pretty much as predicted. Rain was very localized; we got sprinkled on a couple of times at our house in Mariposa, but other nearby areas got dumped on when they received a direct hit from a thunderstorm.

Wednesday night brought thunder to the foothills near our house – that’s when I made the lightning photograph from my last post. But we saw interesting clouds all week. Claudia and I made two trips to Glacier Point, and I also photographed some beautiful moonlit clouds from our driveway, and made a trip into the lower foothills, where I found some striking, colorful sunbeams.

What do all these photographs have in common – aside from clouds? Patterns. All of these images have some kind of repeating pattern or design in the clouds.

Finding patterns is one of the most essential, fundamental compositional skills. Repeating patterns create unity, cohesion, and rhythm, and our brains just love them. Since landscape photographs are often as much about the atmosphere as the land, it pays to look for patterns in the clouds. Some of the patterns I found last week were pretty obvious, like the repeating small puffy shapes around the moon in the second photograph below. Others were more subtle, like the zigzag design in the clouds above Half Dome in the image above.

Like anything, learning to recognize patterns takes practice. But you can practice almost anywhere. Try looking for patterns while sitting in traffic, or waiting in a line. The more you look for patterns, the more easily you’ll recognize them, and that skill will pay off when you look for designs in fast-moving clouds.

The forecast calls for more showers and thunderstorms in the Sierra high country this week – which means more good weather for photography, and more opportunities to look for patterns in the clouds. 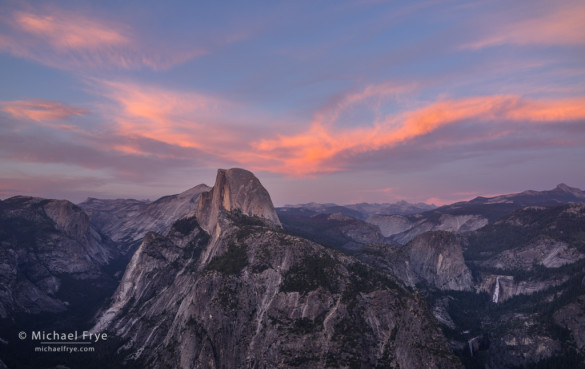 Half Dome from Glacier Point at sunset, Yosemite; this photograph doesn’t have strong repetition, but the band of orange clouds has a wave-like shape that’s faintly mirrored in the landforms below. 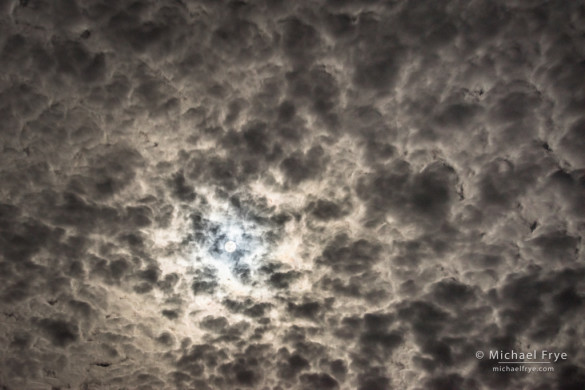 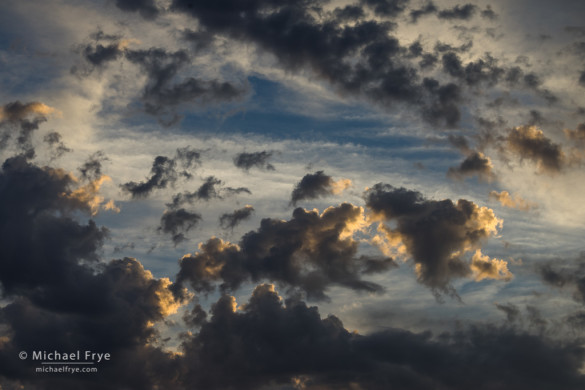 Sunbeams in the Sierra Nevada foothills at sunset, Mariposa County; the sunbeams create a radiating design that cuts through repeating horizontal layers.