Into the High Country 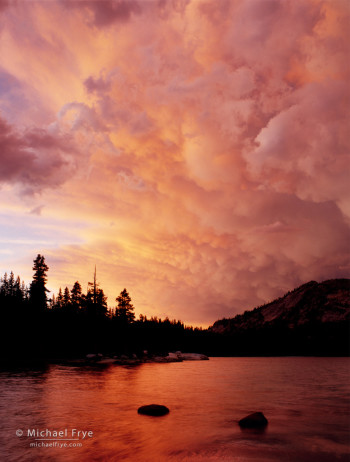 I haven’t had many opportunities to get into the Yosemite high country since Tioga Pass opened, but I hope to head up there soon – maybe even this afternoon, since it looks like some clouds are building. Clouds and thunderstorms always make the summer days in the high country interesting, and potentially photogenic.

This photograph, from July of 2003, shows one of the most spectacular cloud formations I’ve ever seen. Claudia and I were in Tuolumne Meadows, and watched and photographed a thunderstorm move through from east to west. I hoped that after the storm passed we’d see some interesting light, but no such luck – it was just overcast. So I decided to follow the storm, and drove west toward Tenaya Lake.

We stopped near the eastern end of the lake. I got out of the car and looked out to the west, but the scene didn’t look very interesting in that direction. Then I looked over my shoulder. Holy crap! I saw this turbulent line of clouds, lit by the setting sun, and knew immediately that I was in the wrong spot – I needed to be on the other side of the lake.

I knew exactly where to go, so I drove as fast as the speed limit allowed (more or less) around the lake, pulled into a parking area, grabbed my camera bag and tripod, and literally ran to the shore of the lake. While running I extended the tripod legs, and upon reaching the shore I made a quick decision about what to do with the foreground, placing the tripod so that the two rocks poking out of the water were roughly balanced below the line of clouds. I owned a digital camera by then, a 6-megapixel Canon 10D, but this scene was too good for such a low-resolution camera, so I pulled out my Mamiya 645, attached a 45mm lens (equivalent to about 28mm on a full-frame DSLR), then quickly composed and focused.

From long and painful experience I knew that if I didn’t take the time to do things right I would regret it. With transparency film I knew the water would look too dark relative to the sky, so I pulled out my one-stop graduated neutral-density filter and holder, mounted the filter, and adjusted it. I probably set the aperture to f/22 for maximum depth of field, though I don’t remember exactly. Then I took a quick spot-meter reading off some brighter areas of the cloud, and set a shutter speed to place that at Zone 6 (being sure to compensate for the one-stop graduated filter). Again, I don’t remember the shutter speed setting; I doubt I even noticed or cared at the time. Judging by how the water looks I’d guess it was around 1/4 of a second.

During all of this I stole quick glances at the sky to make sure the light hadn’t faded. Not yet. Using a cable release I clicked the first frame, then adjusted the shutter speed dial to bracket two more exposures. When I looked up, the light was gone! It had faded during the few seconds it took to bracket three frames, so I wasn’t sure I had caught it. Luckily I did, as you can see from the photograph. It wouldn’t be as good of a story if I’d missed it. 🙂

I would have missed this moment if I hadn’t been thoroughly familiar with my equipment and technique. Every step I mentioned was something I’d done over and over until it became second nature. And I’d been in similar situations before, so I didn’t panic. I moved quickly, but didn’t rush, and just focused on the next step of my well-worn routine. My routines are a bit different now with a digital camera, but the specifics aren’t important. What matters is having a routine for setting up, focusing, figuring out the aperture and shutter speed (or exposure compensation if you’re using aperture-priority mode), and practicing that routine until it becomes second nature. Then the next time nature presents you with one of those beautiful-but-fleeting moments, you’ll be ready.