A Good Year for Dogwoods 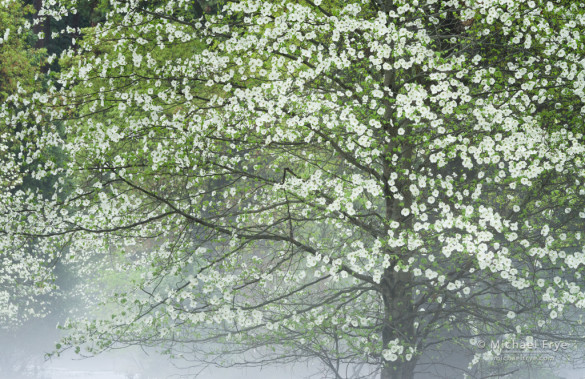 Only one dogwood was clearly past peak, and that tree is always an early bloomer. The rest were rather mixed, with some fully leafed out, others with only small leaves, and even a couple with newly-emerging greenish blossoms. The cool and showery weather this past week apparently has helped preserve the flowers, and made this a long-lasting dogwood bloom. But what really struck me yesterday was how full they were. Many trees were just overflowing with blossoms, and we saw many strikingly-beautiful specimens.

I suspect, however, that they won’t last long. The forecast calls for warm weather this week, and the dogwoods that are fully leafed out may start to whither. But the trees that haven’t progressed as far should still be in good shape for another week or so. Also, higher-elevation dogwoods along Highway 41, Highway 120, and in the Tuolumne Grove should last even longer. We didn’t have a chance to check those spots yesterday, but typically the dogwoods up there bloom one to two weeks later than the dogwoods in Yosemite Valley. Of course this has been anything but a typical year, so you never know, but that’s what I’d expect.

As an example of how long the dogwoods have lasted, the photograph below, made yesterday afternoon, is the same tree I photographed on April 8th (second image from the bottom in this post). Back then the blossoms were just emerging, but it still looked fresh yesterday, with small, unobtrusive leaves.

So there’s still time to photograph dogwoods in Yosemite Valley, but go soon!

P.P.S If you’re in Yosemite Valley you should check out the newly renovated Ansel Adams Gallery. It’s always a great place to find inspiration, and the staff photographers are very knowledgable about current conditions. 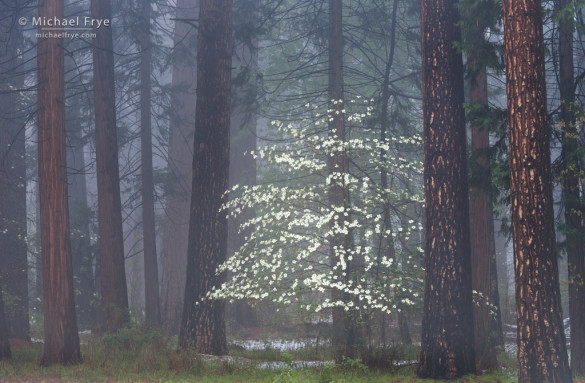