Knowing Where to Stand 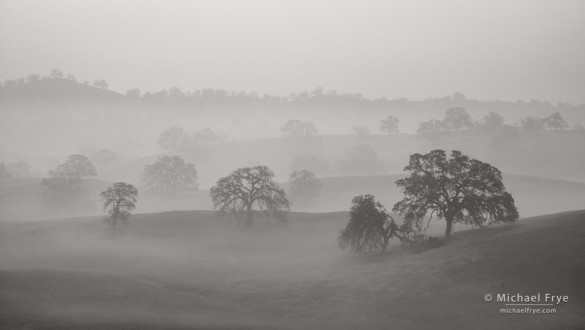 Ansel Adams was quoted as saying, “A good photograph is knowing where to stand.” I’m sure he said this with tongue slightly in cheek – he knew full well that the art of photography was more complex than that. But he was trying to emphasize the importance of putting the camera in the right spot. Not just in the general vicinity, like “F/8 and be there,” but in exactly the right spot, and not an inch to the left, right, forward, back, up, or down.

Compare the two photographs shown here. In the photograph below, I moved left and right to place the three most prominent oaks between the trees behind them. But try as I might, I couldn’t completely separate the foreground and background trees, so I climbed further up the hillside behind me and made the image above. This higher camera position created better spacing and separation between the foreground and background oaks, and a composition I’m much happier with.

Choosing where to place the camera is the first – and maybe most important – decision you make when composing a photograph. This is such a vital topic that I wrote an in-depth article about it for the latest issue of Photograph Magazine. This issue of Photograph also includes an outstanding group of articles by John Paul Caponigro, Guy Tal, Martin Bailey, Piet Van den Eynde, David duChemin, and many others.

Normally Photograph Magazine is $8.00 Canadian, but since it’s just been launched you can get a 20% discount until midnight Pacific Time on April 22nd. There’s no code to enter – that’s just the price until that time.

I hope you enjoy the article, and the magazine! P.S. Claudia and I are in Death Valley right now, preparing for an upcoming workshop. I’m having a wonderful time photographing this fantastic place, and I’ll post some images when I get a chance.