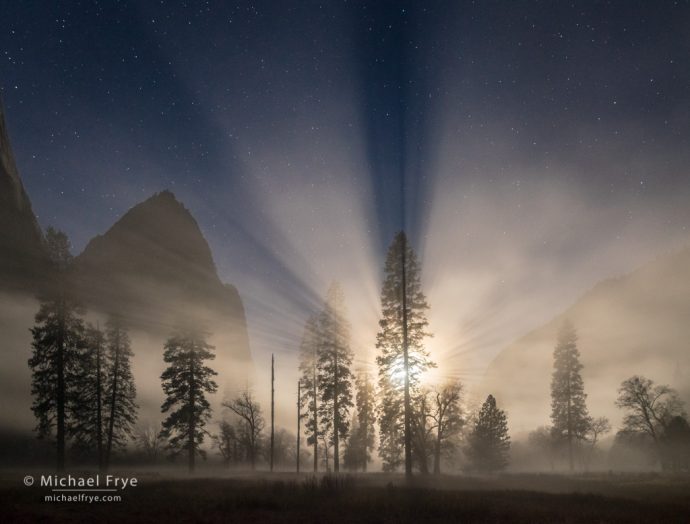 Sunday night at around 11 o’clock I was, naturally, thinking about going to bed. But I decided to check the satellite images online to see if it might be worth getting up early. The skies had been overcast in the afternoon, with some light showers. Now the satellite images showed skies clearing.

It occurred to me to check the moon. I knew the moon was waxing (getting closer to full every day), but wasn’t sure exactly what stage it was in. Looking at PhotoPills told me the moon was at 71% (about three-quarters full), and due to set at 1:42 a.m. The angle of the moonset – 273 degrees – was interesting, as it was similar to the angle of the setting sun in late March, which is a good time of year for late-afternoon photographs from Tunnel View.

Hmm… A quick look outside revealed some interesting, low-hanging clouds. If I moved quickly I could reach the valley before the moon went down. And if there were clouds, and some mist from the rain, I could perhaps make a nighttime version of this late-March photograph, using the setting moon, instead of the setting sun, to illuminate Cathedral Rocks and Bridalveil Fall. There wouldn’t be much water in the fall, but still, it might be interesting, and worth a try.

I threw on warm clothes, grabbed some snacks and my camera gear, and headed out the door. Unfortunately, the skies had cleared, and the interesting clouds were gone. But I was committed by then, and kept going. Maybe I’d find more clouds in the park.

No such luck. Arriving at Tunnel View, I could see only clear skies overhead. There was some low-lying mist in the valley, which was interesting, and I took a few photographs, but it wasn’t what I was hoping for.

So I asked myself what I would do in the daytime with low-lying mist in the valley. I wouldn’t go to Tunnel View – I’d go down into the mist. And I’d look for backlit trees, with the potential for sunbeams and other interesting lighting effects.

So I drove down to El Cap Meadow, and found a beautiful scene, with the mist and trees backlit by the setting moon, and… not sunbeams… but rather moonbeams radiating from the trees. For the next half hour I tried different angles and compositions as the mist shifted and the moon sank, always being sure to include some stars to make it clear that the photographs were made at night. Most of the time I hid the moon behind a tree to avoid lens flare, and to show the radiating light beams. Although several compositions worked well, the image above jumped out at me later, with its Close Encounters look.

I could only see hints of the gold, sunset-like color with my eyes, but the color showed up very well on the back of the camera, and later in Lightroom. The color-recording cones in our retinas don’t work at low light levels, so we tend to see nighttime scenes in black and white. But the camera can record colors at night perfectly. And when the moon sets, its light turns gold and orange, just like at sunset (for another example of this, take a look at this photograph of Horsetail Fall by moonlight).

Looking right into the moon, I didn’t need to push the ISO as high as in my other recent nighttime photographs from Yosemite Valley. The exposure here was 8 seconds at f/2.8, 1600 ISO. To arrive at this exposure, I used exactly the same procedure as for a daytime photograph looking into the sun: I looked at the histogram and blinkies, and adjusted the exposure until there were some small areas of blinkies around the sun – or in this case, the moon. Although I bracketed some exposures, this is not an exposure blend; it’s just one Raw file processed entirely in Lightroom.

In all my years photographing Yosemite Valley I have never seen the sun setting through mist in El Cap Meadow. It just doesn’t happen, because you usually only find low-lying mist like this in the morning, not the afternoon. Sometimes fog forms in El Cap Meadow around sunset in winter, but at that time of year the sun sets too far to the south to reach the meadow (behind Cathedral Rocks to the left in this view). So almost by accident I found the perfect way to photograph mist in El Cap Meadow with really low backlight – by using the moon!

Anyway, it was another fun night. I lost a little sleep, but it was well worth it.

Related Posts: Too Much Fun; Horsetail Fall by Moonlight