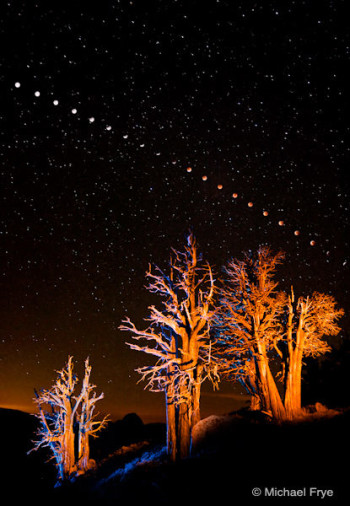 Lunar eclipses are spectacular events to see and photograph. I’ve been lucky enough to capture several lunar eclipse sequences over the years, including this one from Yosemite in August 2007.

We’re all going to get another chance at photographing an eclipse soon: a total lunar eclipse will be visible throughout North America early Wednesday morning, October 8th.

In the western half of the U.S. the entire eclipse sequence will be visible, from full moon, to partial eclipse, to total eclipse, and back to full again. In California the moon will be high in the sky to the west-southwest at the beginning of the sequence, then sink near the horizon to the west by the end of the sequence. The moon’s path will actually be somewhat of similar to path in this photograph, except that the eclipse will be higher in the sky and a bit further to the right, and the angle of the moon’s path will be steeper.

On the east coast the moon will set when its fully eclipsed, so it won’t be visible as its coming out of the eclipse. But that means the moon will be near the horizon when its fully eclipsed, where you might be able to photograph it next to an interesting foreground object as the dawn lightens the sky. It should be just north of due west as it sets.

So how do you photograph an eclipse? For the eclipse on April 14th this year I wrote a post for the Borrowlenses blog with detailed descriptions of the whole process, including focusing in the dark, exposure, capturing a sequence, and assembling a sequence.

If you can’t photograph this upcoming eclipse, there will be two more total lunar eclipses visible in North America in 2015, on April 4th and September 27th. However, only people in the western half of the U.S. will be able to see a total eclipse on April 4th, and totality will be brief – less than five minutes! East coast viewers will be able to see the entire eclipse sequence on September 27th, while from the west coast the moon will rise fully eclipsed, providing opportunities to juxtapose the moon with foreground objects..

After that, you won’t be able to see a total lunar eclipse in North America until 2018. We’re lucky to have this grouping of four eclipses in two years, so take advantage of it while you can! Who knows if you’ll have clear skies next year, or in 2018?

Related Posts: Eclipse; Winging It Through the Eclipse