The Trouble With High Places 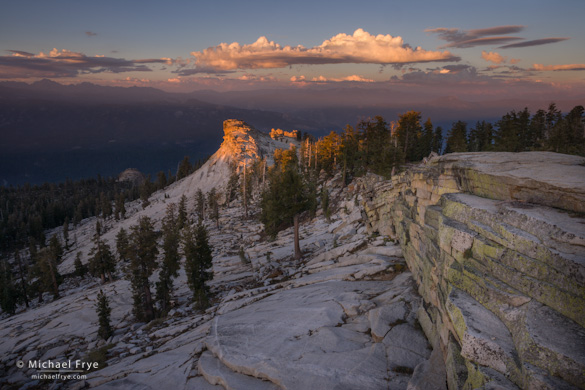 Last light on a granite thumb below Shuteye Peak

The Journey to Shuteye Peak

Shuteye Peak is in the Sierra National Forest south of Yosemite, and from the fire lookout on top (8,351 feet) you can see a spectacular 360-degree view that includes the Clark Range, Mt. Lyell (both in Yosemite), Mount Ritter, the Minarets, Mammoth Mountain, Bear Creek Spire, the Kaiser Wilderness, and the deep gorge of the San Joaquin River 5000 feet below.

I had been to Shuteye Peak many years ago on a scouting trip. I didn’t take any photos, but remembered the amazing view and wanted to go back. Claudia and her friend Anne had tried hiking there last year, but hadn’t managed to navigate the maze of Forest Service roads approaching the mountain.

There’s a road to the summit of Shuteye Peak, and supposedly in the past you could drive a station wagon up it. Not any more. The road has deteriorated, to say the least, and now the last two-and-a-half miles from Little Shuteye Pass are a very difficult and rocky four-wheel-drive trail, suitable only for expert drivers in appropriate vehicles. We found the route to Little Shuteye Pass (even that road requires a high-clearance vehicle), but hiked that last stretch.

When we reached the tower at the summit we met Ray, the Forest Service lookout. Ray was super nice, giving us a guided tour of all the landmarks visible from the tower, and offering us sodas and snacks. Then Claudia mentioned to me that her iPhone battery was down to 17 percent, so she wasn’t sure she’d be able to take any photos of the moonrise. Ray overheard this, and said that he happened to have two iPhone chargers! So Claudia was able to recharge her phone and get her camera up and running. The tower has solar power and satellite TV, and Ray has internet access through his iPhone and a cell booster.

As the sun got lower I started scouting for photo locations. There were some clouds over the Sierra crest, plus twisted trees and layered rock formations that could make good foregrounds—though none of these objects seemed to line up well with where I expected the moon to rise. As I looked for foregrounds Rider followed me, looking for squirrels.

When the sun sunk further I started taking photographs. Soon the moon appeared, and I captured a few frames of it, but I was more attracted to a thumb of rock on a ridge below the summit that was catching the last rays of sunlight. I eventually found a spot where I could use the curving, layered strata of the ridge as a foreground leading to that thumb (the image at the top of this post). Then I ran (literally, sometimes) to another angle where the thumb lined up better with the clouds, getting there just before the light left the thumb. But, as it turned out, I didn’t like that angle as much.

Climbing back to the ridge I found a composition with some rock formations and diagonal lines in the foreground, and the moon overhead (below). 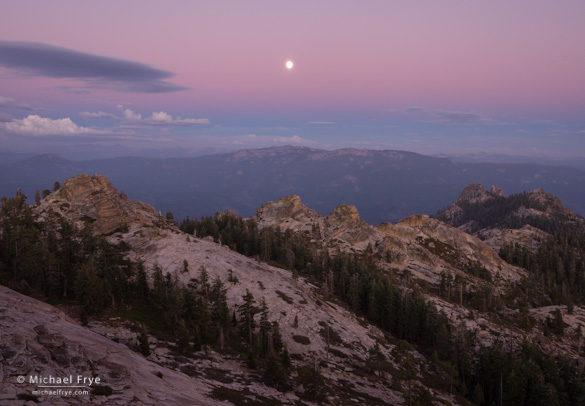 Moonrise over the Sierra Nevada and Kaiser Wilderness from Shuteye Peak

The Trouble With High Places

But although these photographs turned out okay, I wasn’t thrilled with them. My first handicap was the unfamiliar location. It’s difficult to make great images in a place you’ve never photographed before. Sometimes it happens—you just get lucky and happen to be in the right spot at the right time. But that’s the exception. More often you see that the light is great over there, but by the time you get there it’s too late. If I had known, for example, about the last light hitting that thumb of rock I would have scouted locations with that in mind. I might have even hiked out to it. Next time.

The other problem was that high viewpoints rarely make good photo locations. This seems counterintuitive, because standing on a high summit—especially one with a sweeping, panoramic, world-class view like Shuteye Peak—is a breathtaking experience. But that euphoria is created by the unfamiliar sensation of being high up and having such vast space around you, not necessarily by the actual visual components of the scene. On Shuteye, for example, the distant peaks of the Sierra crest amounted—visually—to no more than a thin strip of bumps on the horizon. Photographically, looking up at a mountain usually works better than looking down from it.

I’m not suggesting that you avoid these high viewpoints. Life is about more than photography, and visiting these summits is a great experience. Even though I didn’t come home with fantastic images, we had a wonderful time, and a big adventure, on our hike to Shuteye Peak. I knew that the high and unfamiliar viewpoint would make photography challenging, so my expectations were low.

If you want to try making photographs from such a spot anyway, here are a couple of suggestions. First, don’t try to include the whole panorama; everything will just look small, distant, and uninteresting. Use a telephoto lens, pick out an interesting detail, and zoom in on it. While I didn’t find this kind of telephoto composition on Shuteye Peak, from a high vantage point on Yosemite’s Pothole Dome this summer I zoomed in on distant peaks and spectacular cloud formations (see the fourth and fifth photographs in this post).

Second, try to find an interesting foreground. Juxtaposing a foreground with the distant view can help convey the sense of space and distance that you feel in high places. That’s what I tried to do with that thumb of rock on Shuteye Peak.

As we hiked back in the dark the moon helped light our way, and Claudia and I saw occasional flashes of lightning 30 miles away to the east. By the time we reached our vehicle, drove ten miles of dirt roads, then some winding paved roads, stopped at Jack in the Box in Oakhurst, and reached home, it was 11:30. We had a great time, and we’ll be back. 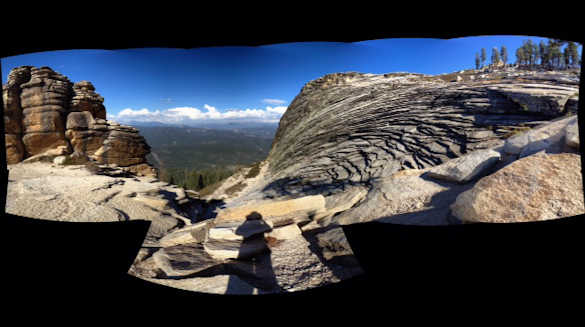 Claudia took this self-portrait near the start of the trail

On the lookout tower with Ray (photo by Claudia Welsh) 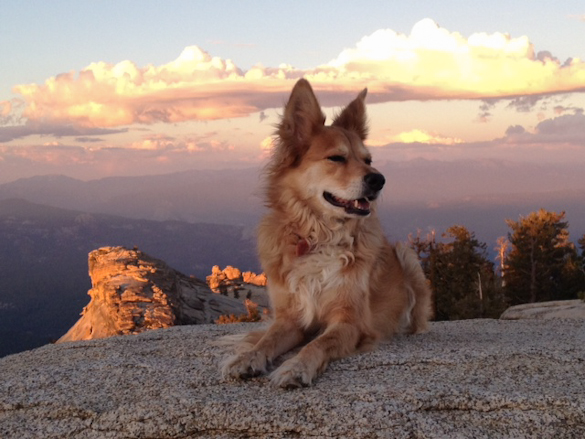