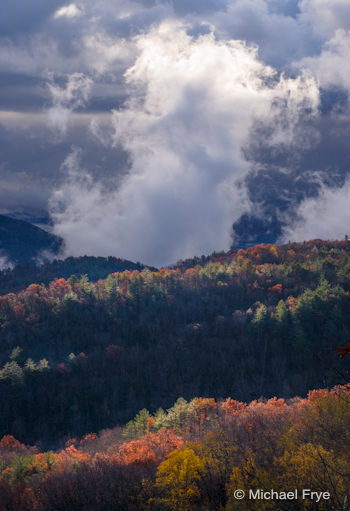 I’ve finally had a chance to really dive into Lightroom 4, and I’m very happy with the results I’ve been getting. While I haven’t found a big difference in processing low-contrast images, with high-contrast scenes the improvements are significant.

The accompanying image was made during my trip to South Carolina last November. It was a fast-changing situation—the sun suddenly broke through, and I missed the exposure slightly, so the brightest highlights at the top of the clouds were blown out. By the time I adjusted the exposure the scene had changed.

I struggled to process this image with Lightroom 3. While I was able to recover detail in most of the highlights, they still looked a bit hot, and the darker bottom half of the image seemed flat, despite extensive efforts to bring out the detail and contrast in this area. You can see this Lightroom 3 version at the bottom of this post.

The version on the right was processed in Lightroom 4. I was able to get better texture and detail in the brightest parts of the cloud, while the bottom half of the photograph has more local contrast, and seems livelier. Overall I’m much happier with this version.

Along with this improved ability to handle high-contrast images, Adobe has made big changes to the Develop Module. I’ve been testing Lightroom 4 extensively, and though I’m still learning, I’ve found out many things about how the new tools really work—things that I haven’t seen or read elsewhere. I’m looking forward to sharing all this with you, but it’s easier to show you than write about it, so I’m working on a video (or maybe two videos), that do just that. I’ll show you how the new tools differ from the old ones, how they really behave, how that might influence the way you work, and some suggested working methods for getting the most out of Lightroom 4. I’ll be posting this next week—stay tuned!

About That Point Curve Bug…

Adobe has finally provided a fix for the point curve bug in Lightroom 4 that I mentioned in an earlier post. They’ve released Lightroom 4.1 RC (release candidate), which seems to solve the problem. You can download this update here. Adobe says “a ‘release candidate’ label indicates that this update is well tested, but would benefit from additional community testing before it is distributed automatically to all of our customers.” Which is basically their way of saying don’t blame them if it doesn’t work perfectly. But this does seem to solve the point curve problem for most people. You can read more about this issue in one of the Adobe forums.

There is a lot of confusion about this bug, and what it is. The appearance of the point curve will change when you update an image from the 2010 (Lightroom 3) process to the 2012 (Lightroom 4) process, but that’s not a bug—it’s by design. The point curve in the 2012 process has a different baseline starting point than it did in the 2010 process, so the shape of the curve necessarily has to change to reflect this. (I’ll talk more about this baseline change in the video.)

The bug is different. It occurs when you update a Lightroom 3 catalog to Lightroom 4, and look at an image in the Develop Module in Lightroom 4. Before updating the process version—in other words, while the image is still in the 2010 process—point curve settings disappear, and the curve resets to it’s default.

I expect Adobe will officially release this 4.1 update soon. In addition to this point curve problem I’ve heard about a few issues, especially some plugins that no longer work, but these should all be fixed with the update.

Happy Easter! I hope you all have a great holiday weekend.

Related Posts: Lightroom 4 Goes on Sale; Should You Wait, or Dive In?; A Trip to South Carolina 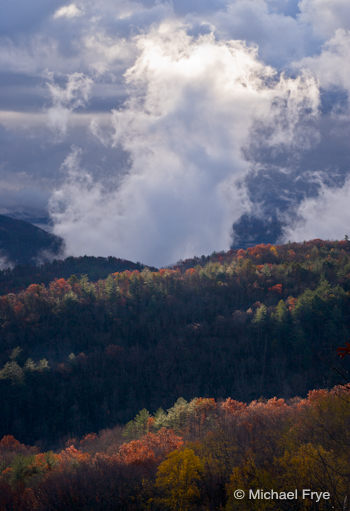 The same image processed in Lightroom 3. There's less texture and detail in the top of the cloud, and the bottom half of the photo looks duller and flatter.